San Jose, Calif., June 27, 2017 – Americans are willing to pay more at the pump in taxes if the revenue is used for specific transportation purposes, according to the results of a new Mineta Transportation Institute (MTI) national telephone survey. The report, What Do Americans Think About Federal Tax Options to Support Public Transit, Highways, and Local Streets and Roads? Results from Year Eight of a National Survey,reveals that more than twice as many Americans would support a 10¢ gas tax increase dedicated for road and highway maintenance as would support that same tax increase if the money were dedicated for unspecified transportation purposes. 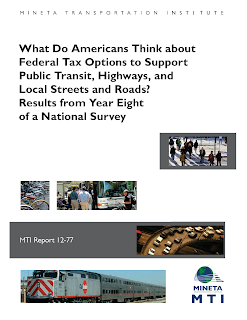 The survey is year eight of an annual series that asks the same questions each year. This year’s results continue the trend that shows that support for raising gas taxes is growing.

The study, available for free PDF download at http://transweb.sjsu.edu/project/1728.html, was conducted by Asha Weinstein Agrawal, PhD, and Hilary Nixon, PhD.

“The U.S. transportation system requires critical – and expensive – system upgrades,” said Dr. Agrawal. “This survey shows that a supermajority of Americans support a federal gas tax increase if the revenue is dedicated to maintaining streets, roads, and highways.”

ABOUT THE RESEARCH TEAM

Asha Weinstein Agrawal, PhD, is director of the MTI National Transportation Finance Center and also professor of urban and regional planning at San José State University. Her research and teaching interests in transportation policy and planning include transportation finance, pedestrian and bicycle planning, and travel survey methods. She also works in the area of planning and transportation history. She has a B.A. from Harvard University in Folklore and Mythology, an M.Sc. from the London School of Economics and Political Science in Urban and Regional Planning, and a Ph.D. from the University of California, Berkeley, in City and Regional Planning.

ABOUT THE MINETA TRANSPORTATION INSTITUTE

At the Mineta Transportation Institute (MTI) at San Jose State University (SJSU) our mission is to increase mobility for all by improving the safety, efficiency, accessibility, and convenience of our nation's’ transportation system through research, education, workforce development and technology transfer. We help create a connected world.

MTI was founded in 1991 and is funded through the US Departments of Transportation and Homeland Security, the California Department of Transportation, and public and private grants. MTI is affiliated with SJSU’s Lucas College and Graduate School of Business.