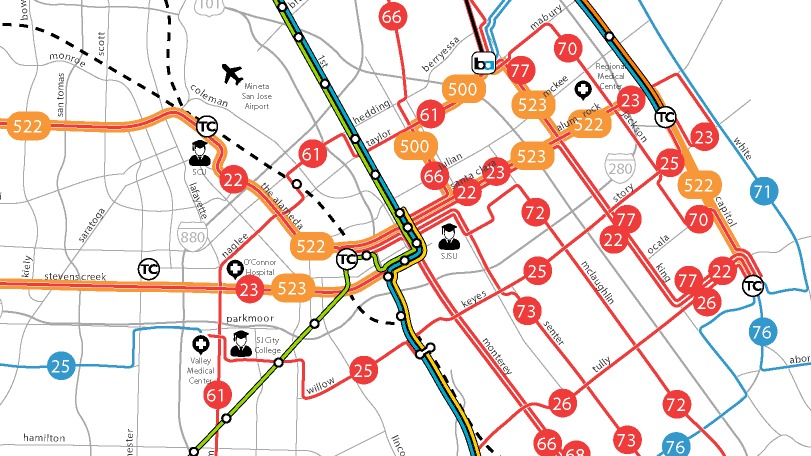 VTA scheduled a series of nine public meetings to gather input on its Transit Service Redesign Draft Plan from members of the community. The VTA public meeting locations and times are scheduled as follows:

VTA’s Board of Directors approved the release of the FY18-19 Draft Transit Service Plan for public review on January 5, 2017. VTA is seeking input for final plan development. The Draft Plan proposes changes to transit routes to accomplish three main goals:

The proposed plan would locate more service and frequencies in the places that have higher ridership, and density, walkability and a mix of land uses.  The Draft Plan proposes reducing in areas with less ridership, low-density and automobile-oriented.  This follows direction by VTA’s Board to increase the amount of funds spent on ridership-oriented routes and decrease spending on coverage-oriented routes.  About half of current VTA transit riders would see increases in frequency while about 10 to 15 percent would see decreases in frequency or discontinued service—though many of these riders would be able to make their trip by a different route or combination of routes.
Implementing the Draft Plan would increase the number of residents within a short walk of 15-minute or better service by about 17% over the current network.  The number of jobs within a short walk of frequent service would increase by about 27% over the current network.  The Draft Plan would also create a grid of frequent, all-day routes that would enable many more trips to be made on the frequent network.  When transit routes become more frequent, trip durations decrease, reliability increases and transfers between frequent routes become shorter and more convenient.

The Draft Plan proposes two new frequent Rapid routes, the 500 and 523.  Rapid 500 would provide limited stop service between Diridon Station and the Berryessa BART Station, in the future this will be served by BART. Rapid 523 would enhance existing Route 323 with faster travel between North Sunnyvale, De Anza College, Santana Row/Valley Fair, Downtown San Jose and the Berryessa BART Station.

The average ride on VTA’s non-express bus network costs VTA about $4.50.  On higher ridership routes, the cost per rider can be as low as $2.00 while on lower demand and ridership routes it can be as high as $15.00.  The less VTA spends per ride, the more rides that VTA can provide overall.  Per the goal of improving overall efficiencies, VTA is proposing to reduce or discontinue service on lower demand and ridership  routes and reallocate those resources to higher demand and utilized  routes.  This change would increase the number of rides that VTA is able to provide per dollar spent.

Improve connections to regional services like BART and Caltrain

BART service to the Milpitas and Berryessa Transit Centers/BART Stations is on schedule to begin in the later part of 2017.  Accordingly, VTA will be discontinuing Routes 120, 140, 180 and 181 that serve the Fremont BART Station.  Transit service to the Milpitas and Berryessa  Transit Centers/ BART Stations will be enhanced in order to connect Santa Clara County travelers to BART and vice versa.  New connections are also proposed to Caltrain, notably new Rapid Route 523 to the Sunnyvale Caltrain Station, revised Route 60, which would link Caltrain, the Mineta San Jose Airport and the Milpitas BART Station and new Route 500, which would connect Diridon Station to the Berryessa BART Station.  All of these routes would operate at 15-minutes or better all day.

While much of the discussion of the proposed changes concerns metrics, there is a human side to designing transit service.  We give extra consideration to schools, seniors, low income and disabled riders.  Our proposed changes comply with Title VI of the 1964 Civil Rights Act, which prevents discrimination based on race, color or national origin.  We have not changed our approach to providing additional service to schools around bell times.  We have recommended updating VTA’s paratransit policy to ensure that no negative impacts are incurred by current paratransit users in Santa Clara County.  To the extent possible, the proposed changes maintain service to senior centers, hospitals and other community destinations.  Much of this is based on what we believe is the right thing to do and is endorsed by requests that we’ve heard from communities throughout our outreach.

The last time VTA redesigned its transit system from scratch, we made about 50 changes between the release of the Draft Plan and the adoption of the Final Plan—all based on community input.  We rely on the community to help us with the big picture and fine details of service planning.  You know your community and your routes and we’re counting on your input to help us make the Draft Plan better.

For more information on this proposed service plan, visit NextNetwork.vta.org
Webinars on VTA’s Transit Service Redesign Draft Plan will be available on: