For the December Book Club selection, TransportiCA has chosen The Death and Life of Great American Cities, by the incredible Jane Jacobs.

Although Jacobs passed away in April 2006, this year, we celebrated her 100th birthday (04 May).  In May, TransportiCA posted several stories of Jacobs by current, well-known urban theorists and planning professionals, coming to understand the power Jacobs commanded with her new, powerful and extremely controversial ideas of the city.  Many at TransportiCA had heard of Jacobs in our planning and development classes, but did not realize the wide-reaching and continuing effect Jacobs had/has on American planning, urbanization and city and social politics, until this year.

A journalist by trade, Jacobs' monumental publication - The Death and Life of Great American Cities - transformed the way we looked at portions of major cities, bringing forward new - and highly unpopular - discussions about the purpose and legitimacy of so-called "urban-renewal" efforts.  Jacobs argued that such efforts did not really benefit anyone in cities, let alone displaced residents in the areas targeted for "renewal."  Despite not having a formal planning education, Jacobs was one of the nation's greatest "urbanists," mending city planning and economic development with numerous sociological considerations, as well as, bringing attention to the importance of systems-thinking in city planning and development.

We also want to bring attention to another amazing piece of Jacobs' work - "Downtown is for People."  Originally based on a speech she gave at Harvard, Fortune magazine later published this in 1958, and it would serve as the basis for Death and Life.  In this, Jacobs discusses the importance of bustling downtowns, and how major developments suffocate the diversity of street life and social activities, only enhancing "the smallness of big cities."  Now 58 years since publishing, we find the same arguments for development and transportation access bearing weight with today's millennial- and Baby Boomer-led migration to urban centers; hence, both Death and Life and "Downtown is for People" being necessary readings for today's planning scholars.

Such is the power and timelessness of Jane Jacobs; she was far ahead of her time, and many elements and processes have her to thank for continuing in today's planning lexicon.

For the reasons mentioned above, and many more, TransportiCA is proud to feature The Death and Life of Great American Cities for the December 2016 Book Club selection. 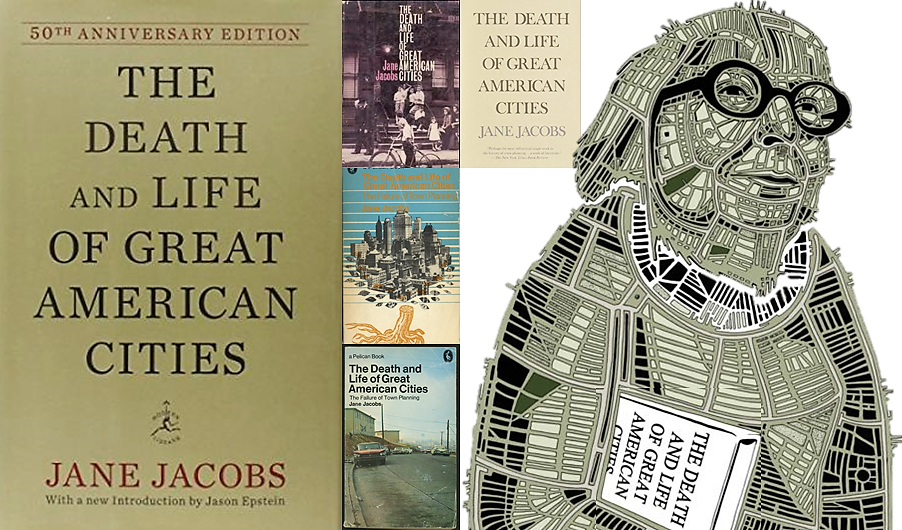 Published to coincide with the 50th anniversary of its initial publication, this special edition of Jane Jacobs’s masterpiece, The Death and Life of Great American Cities, features a new Introduction by Jason Epstein, the book’s original editor, who provides an intimate perspective on Jacobs herself and unique insights into the creation and lasting influence of this classic.

The Death and Life of Great American Cities was described by The New York Times as “perhaps the most influential single work in the history of town planning. . . . [It] can also be seen in a much larger context. It is first of all a work of literature; the descriptions of street life as a kind of ballet and the bitingly satiric account of traditional planning theory can still be read for pleasure even by those who long ago absorbed and appropriated the book’s arguments.” Jane Jacobs, an editor and writer on architecture in New York City in the early sixties, argued that urban diversity and vitality were being destroyed by powerful architects and city planners. Rigorous, sane, and delightfully epigrammatic, Jane Jacobs’s tour de force is a blueprint for the humanistic management of cities. It remains sensible, knowledgeable, readable, and indispensable.  (Random House)