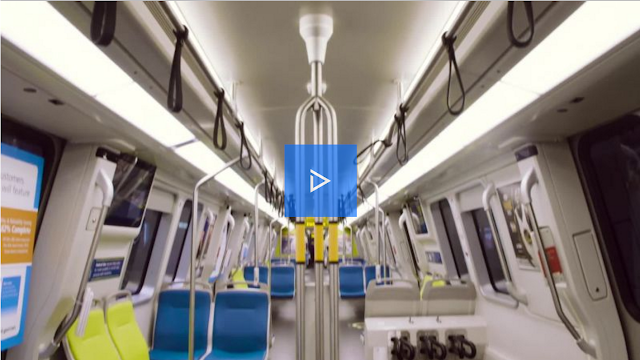 WHEN YOU STEP aboard your train in the morning, you see plenty of things. The faces of familiar strangers, the unexpected open seat (or not), ads for cheap lawyers and doctors. Or, maybe just your phone screen. What you don’t see are the hidden forces that guide your train ride.
To the best train interior designers, you are a puppet, a malleable, fleshy being to be controlled by force. The scariest thing about good design is close to conspiracy: You don’t even know someone’s pulling the strings. And that counts on your commute as much as anywhere else.
The engineers who gin up train interiors navigate a series of obstacles. Cars must be safe, comfortable enough, easy to clean, and child- and disability-friendly. They demand adequate seating for long-haul riders, but not so much that it exacerbates crowding problems.
These design decisions dictate life inside the car: who stands where, whether people crowd the exits or spread throughout the car, whether cyclists or very tall passengers feel slighted.
So maybe it’s no surprise Bay Area Rapid Transit—aka BART, which carries riders around San Francisco and its environs—has spent the past seven years creating its new generation of train cars. Many of its current ones are more than 40 years old, and increasingly squeezed for space. By the time 60 of these new Bombardier cars make their debut next year—and certainly by 2021, when 775 of these things will rule the bay—designers will know whether their machinations worked.

To kick off the design process, way back in 2009, BART asked its riders to send them feedback via email. “Of the first 300 emails we got, the single biggest issue was having adequate seating,” says BART marketing and research manager Aaron Weinstein. So the Jedi mind tricks start there.
On today’s older cars, a series of transverse, airplane-style seats do the unthinkable: force riders to sit knee-to-knee in close quarters. When the system made its debut in 1972, designers expected these seats to be taken by groups traveling together. It also carried 100,000 riders a week.
But most of today’s 440,000 daily passengers hit the tracks solo. Observational trips and survey responses told BART that arrangement makes people uncomfortable. So does sitting next to strangers at all. “We saw a row of people seated in the BART train subtly leaning away from each other,” says BART marketing and research manager Aaron Weinstein. No one likes a rando.
The solution? Nix those knee-to-knee configurations, separating seats with strips of white plastic that plainly mark where one rider’s space ends and their neighbor’s begins. If the BART team got it right, passengers will feel more at ease, without knowing why—or even realizing it.
These rules aren’t universal: They must account for the peculiarities of each system and its denizens. Weinstein and his designers nixed bench seating, because they found riders don’t like staring into the eyes of the folks across the car from them. New York’s Metropolitan Transportation Authority has found many passengers would rather stand than sit in a middle seat, but that city simply can’t avoid including them. Its trains are even more packed than the Bay Area’s, so benches are the best solution.

Put ‘Em in Their Place

Comforting riders is one part of the game, influencing them is another. BART’s engineers filled the Fleet of the Future with subtle design cues that show future BART riders where to sit, stand, or wheel, depending on their proclivities. The layout beckons long-distance commuters to the ends of the cars, where three rows of thrones provide a resting place (and lumbar support).
These seats’ cushions are much thinner than what you might see on commuter rail, but more butt-friendly than the hard, plastic seen, say, on some of Boston’s T cars. As in Chicago, BART finds that riders really like these forward-facing seats, so riders don’t have to brace themselves as the train stops and starts, or worry about getting sick from watching the world move sideways.
Horizontal poles near the two side doors are for short trippers and those who need extra stability. BART mitigated the risk of passengers lingering in front of doors like human roadblocks by giving each car three doors instead of two. The idea is that if people have more exits, they’ll be less panicky about missing their stop, and move towards the center of the car. Each car also carries two labeled spots for wheelchairs, and a three-bike rack inspired by a design from Copenhagen, because those cycling experts know what’s up.
Oh, and that color scheme. This is no homage to Russell Wilson and gang. BART wanted something fresh and modern—an Apple store of train cars. Any combination of hues would run into sports allegiances, Weinstein points out.
If one engineering stratagem or another flops, BART has other options. It designed the cars to be modular, so it can pop seats on and off at will. A truism: Legos cover all manner of ills.