FOR IMMEDIATE RELEASE: September 21, 2016
Press Contact:Estevan Montemayorestevan.montemayor@lacity.org213.605.4145
L.A. COUNCILMEMBER RYU PUSHES FOR AUTONOMOUS TRANSIT CITY BY 2035
Los Angeles, CA -- Councilmember David Ryu, introduced legislation instructing the Los Angeles Department of Transportation to report back on the benefits of driverless cars in Los Angeles and the steps that should be taken over the course of the next 5, 10, 15, and 20 years to prepare for an autonomous vehicle city by 2035.
“An autonomous transit city has the potential to revolutionize transportation for the better by bringing transportation equity, greatly reducing traffic, and achieving the Vision Zero goal of zero road deaths in the city,” stated Councilmember David Ryu.
Around the world, the pace of autonomous vehicle technology innovation has been staggering. 10 years ago, no one was talking about autonomous vehicles except in science fiction; 5 years ago, the first road tests were beginning; now, we are on the cusp of the first fully autonomous vehicles reaching mainstream production.  It is not a stretch to assume, at the current rate of progress with this technology, that Los Angeles could become a city with no human operated vehicles by 2035.
“An autonomous transit city would eliminate the biggest drivers of traffic: vehicles circling looking for parking, vehicles blocking the intersection during rush hour, vehicles making last minute lane changes causing rapid stopping, vehicle accidents, and inefficient distances between cars on our roads,” said Ryu.  “Further, residents would likely prefer autonomous car shares rather than full vehicle ownership, freeing up land formerly used for parking lots, parking spaces, and gas stations.”
Councilmember Ryu also calls on autonomous vehicle companies to bring their technologies to Los Angeles, the largest and most congested automotive market in the United States.  “With Uber launching its first autonomous fleet last week in Pittsburgh, Google test driving cars in Palo Alto, and Tesla adding semi-autonomous functionality to its current road vehicles, we need these companies to focus on the largest market and the one that will benefit most: Los Angeles.”
Former General Motors executive Larry Burns estimates that the costs of car ownership in the United States could drop 78%.  As one of the biggest spending line items for Los Angeles families, this would dramatically improve the livelihoods of Angelenos. Experts also suggest that this new technology could likely save lives.  As the consulting and research firm Accenture notes, self-driving cars have the potential to reduce, preventable vehicle deaths, to zero.
“Additionally, the federal government recently released long-awaited guidelines, which outlined safety expectations and encouraged uniform rules for the nascent technology. Now is the time for the City of Los Angeles to consider these technologies as we begin to upgrade roads, replace traffic lights, and expand mass transit.” said Councilmember David Ryu.
Councilmember David Ryu’s motion instructs the Department of Transportation, with assistance from the Department of City Planning and the Bureau of Street Services, to report back to the City Council within 45 days on the likely benefits of an autonomous transit city.
Read Councilmember David Ryu’s motion, here.
### 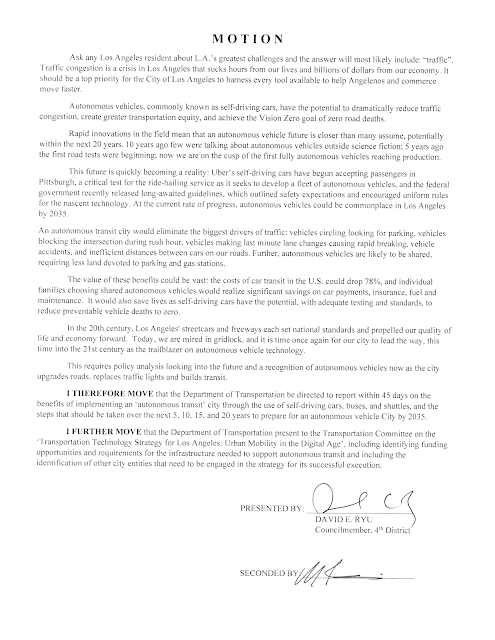