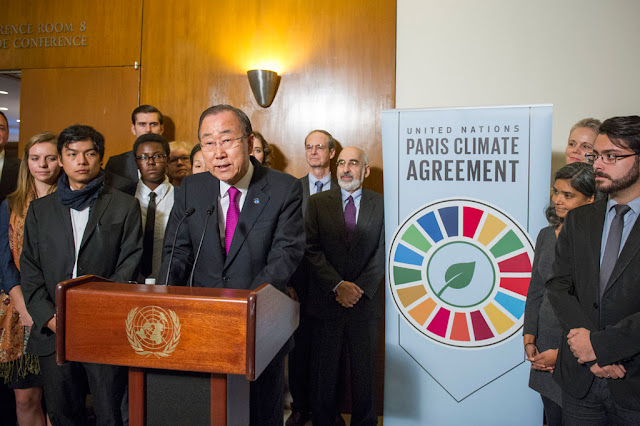 Secretary-General Ban Ki-moon speaks to journalists on the entry into force of the Paris Agreement on climate change. UN Photo/Rick Bajornas


4 November 2016 – As the Paris Agreement on climate change enters into force, United Nations Secretary-General Ban Ki-moon has called for the same determination going forward to implement the Agreement as well as to achieve the 2030 Agenda for Sustainable Development.
“We remain in a race against time. But with the Paris Agreement and the 2030 Agenda for Sustainable Development, the world has the plans we need to make the shift to a low-emission, climate-resilient path,” Mr. Ban told the press today at the UN Headquarters in New York.
“Now is the time to strengthen global resolve, do what science demands and seize the opportunity to build a safer, more sustainable world for all,” he added.

Now is the time to strengthen global resolve, do what science demands and seize the opportunity to build a safer, more sustainable world for all.

In early October, the Paris Agreement cleared the final threshold of 55 countries representing 55 per cent of global emissions required for the accord to enter into effect.
Its entry into force was extremely swift, particularly for an agreement that required a large number of ratifications and two specific thresholds.
The Agreement calls on countries to combat climate change and to accelerate and intensify the actions and investments needed for a sustainable low carbon future, and to adapt to the increasing impacts of climate change. 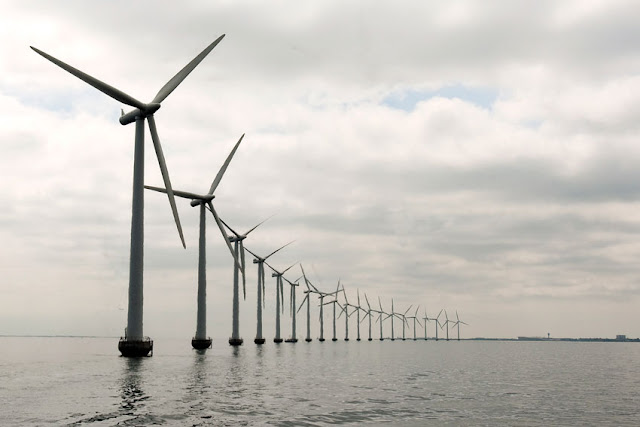 A view of the Middelgruden offshore wind farm. The wind farm was developed off the Danish coast in 2000 and consists of 20 turbines. UN Photo/Eskinder Debebe
It also aims to strengthen the ability of countries to deal with the impacts of climate change and calls for scaled up financial flows, a new technology framework and an enhanced capacity-building framework to support action by developing countries and the most vulnerable countries in line with their own national objectives.
Further in his remarks today, Mr. Ban recalled that the present generation to really feel the effects of climate change and the last that can prevent its worst consequences.
He added that over the past decade, a “great global coalition” for climate action, including government officials, scientists, faith leaders, business executives and civil society activists around the world was forged and it recognized that the future of people and planet was at stake.
“They made today possible,” he said, highlighting: “Today shows us what is possible when we join forces for our common future.”

UN chief discusses role of civil society in the days ahead

Also today, the Secretary-General chief held a meeting with representatives of civil society groups to discuss with them how their organizations could contribute to the objectives of the Paris Agreement, as well as their visions and concerns.
In his remarks, Mr. Ban thanked the civil society for their courage, persistence and leadership in realizing the Paris Agreement and called on them to “keep up the fight”, to press for action and to hold governments accountable.
“Your voices at the time were clearly heard by the leaders who attended the climate meeting [in Paris last year],” he said. “You showed the climate challenge stakes – and the solutions.”
The discussion with the civil society was moderated by David Nabarro, Special Adviser on 2030 Agenda for Sustainable Development, and attended by a number of representatives of civil society groups from all over the world.
Participating in today’s even were: Keya Chatterjee, Executive Director, US Climate Action Network (on behalf of CAN-International); Angie Fyfe, Executive Director USA, ICLEI – Local Governments for Sustainability; and Naomi Ages, Climate Liability Campaigner, Greenpeace.
Pre-recorded video messages were also delivered by: Sharan Burrow, General Secretary, International Trade Union Confederation (ITUC); Alina Saba, Researcher, Mugal Indigenous Women’s Upliftment Institute, Nepal & Asia Pacific Forum on Women, Law and Development; Winnie Byanyima, Executive Director, Oxfam International; and Kathy Jetnil-Kijiner, Instructor, College of the Marshall Islands & Co-Director, Jo-Jikum.
Adopted by 196 parties to the UN Framework Convention on Climate Change (UNFCCC) last December in Paris, the Paris Agreement’s central aim is to strengthen the global response to the threat of climate change by keeping the global temperature rise this century well below 2 degrees Celsius above pre-industrial levels and to pursue efforts to limit it to 1.5 degrees Celsius.
On Monday, the next meeting of Parties to the UNFCCC, known by the shorthand COP 22, kicks off in Morocco’s Marrakech.