[TransportNews] MARRAKECH: ‘The eyes of the world are upon us,’ chair of UN conference says as new round of climate talks opens 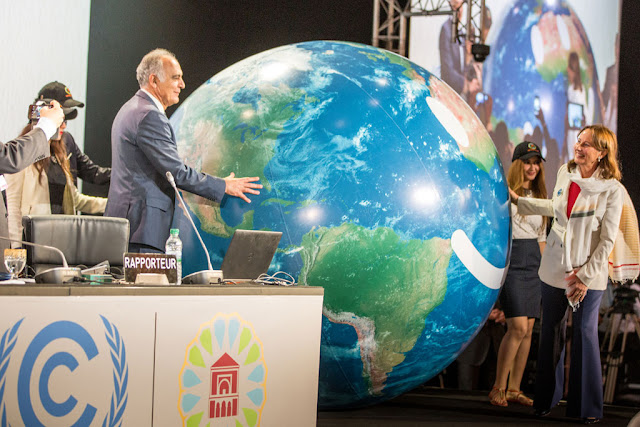 
7 November 2016 – The United Nations Climate Change Conference, known as ‘COP 22,’ opened today in Marrakech, Morocco, just days after the entry into force of the landmark Paris Agreement which has now been ratified by 100 countries.
“This conference comes within a climate of hope and of legitimate aspirations for all of humanity,” said the Minister of Foreign Affairs and Cooperation of Morocco, Salaheddine Mezouar, who was elected today by acclamation as President of COP 22, formally the Conference of Parties to the UN Framework Convention on Climate Change (UNFCCC).
“The unprecedented mobilization of the international community and its political will, expressed at the highest levels, have been crowned by the rapid entry into force of the Paris Agreement. This is unrivaled progress […] and now we must build on this momentum, give tangible meaning to this major step forward through decisions geared towards implementation,” he stated.
In early October, the accord cleared the final threshold of 55 countries representing 55 per cent of global emissions required for it to come into effect within one month. Its entry into force was extremely swift, particularly for an agreement that required a large number of ratifications and the two specific thresholds.
The Agreement entered into force in time for COP 22, where the first Meeting of the Parties to the Agreement will open on 15 November. Before the meeting wraps up on 18 November, parties hope to define the rules of implementation of the Paris Agreement and establish a viable plan to provide financial support to developing countries to support climate action.
In his remarks today, Mr. Mezouar urged participants “to be more ambitious,” and stressed that “the eyes of the world are on us” […] “We have a huge responsibility before humanity and we must join forces in order to address the needs of the most vulnerable populations. We must provide them with the resources to adapt to the disastrous consequences of climate change.” 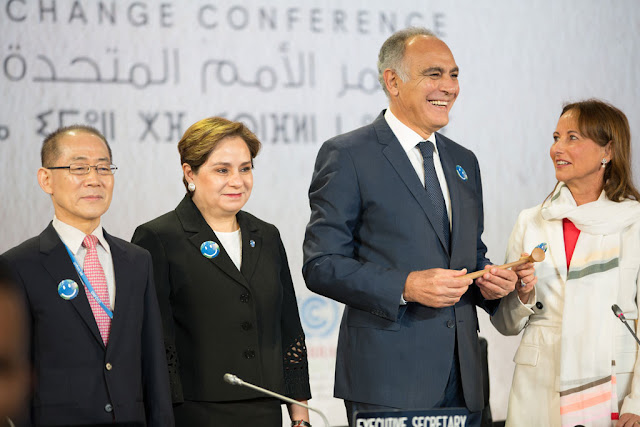 Left to right: Chair of the Intergovernmental Panel on Climate Change Hoesung Lee; UNFCC Executive Secretary Patricia Espinosa, COP 22 President Salaheddine Mezouar and COP 21 President Ségolène Royal at the opening of COP22 in Marrakesh, Morocco. Photo: UNFCCC
Meanwhile, in her remarks, Patricia Espinosa, the Executive Secretary of the UNFCCC, told the opening of the Conference that the rapid entry into force of the Paris accord “is a clear cause for celebration, but it is also a timely reminder of the high expectations that are now placed upon us all”
“Achieving the aims and ambitions of the Paris Agreement is not a given”, she continued, underscoring that: “Marrakech is our moment to take forward climate action at the international and national levels as a central pillar of the successful realization of the Sustainable Development Goals (SDGs). This is our opportunity to take the next steps towards an inclusive, sustainable path for every man, woman and child.”
Ms. Espinosa underlined key areas in which work needs to be taken forward. She stressed that finance is flowing, but it is not enough. Moreover, nationally determined contributions now need to be integrated into national policies and investment plans. She said support for adaptation needs to be given higher priority, and progress on the loss and damage mechanism has to be ensured to safeguard development gains in the most vulnerable communities.
The President of COP 21, which agreed the Paris accord last year, Ségolène Royal, French Minister of Environment, Energy and the Sea, who has passed the baton to Mr. Mezouar, welcomed the ratification of the Paris Agreement by 100 countries as of this past Sunday.
“It's an historic event,” she said at a press conference just before the official opening of the COP 22, where she urged all countries that have not ratified the Paris Agreement to do so, if possible, during the Marrakech Conference “and beyond that, by the end of this year.” Ms. Royal said that the Kyoto Protocol, which was signed in December 1997 and aimed at reducing greenhouse gas emissions, took seven years to enter into force.
“[The clock is ticking] because the year that just ended was the warmest, because the melting of glaciers is accelerating, because desertification is devastating, because the massive urban concentrations call for a new model urban development,” she continued.
Ms. Royal stressed the importance of climate justice, particularly for Africa. “Africa is the great challenge of [this Conference]. COP 22 is an African COP, and that is where the priority and hope are,” she said. “In Africa, climate change is cruel and unfair. The continent suffers the most through no fault of its own. Among the 50 countries which are the most [affected] by global warming, 36 are located in sub-Saharan Africa.”
Non-governmental organizations present at COP 22, including the World Wildlife Fund (WWF) and the Climate Action Network, also welcomed the entry into force of the Paris Agreement but said at press conferences that there was still a long way to go, particularly in terms of funding and concrete implementation of commitments.