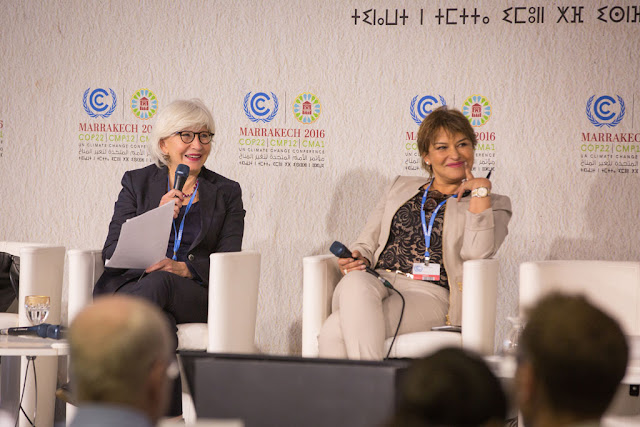 
8 November 2016 – Beyond the work of governments, other stakeholders such as businesses, cities and non-governmental organizations (NGOs) have a crucial role to play in implementing the Paris Agreement on climate change, ‘Climate Champions’ Laurence Tubiana and Hakima El Haité said today in Marrakech, where the United Nations conference known as ‘COP 22’ is under way.
Ms. Tubiana, French Ambassador on climate change, and Ms. El Haité, Moroccan Minister in charge of Environment, were appointed Climate Champions by the Conference of Parties to the UN Framework Convention on Climate Change (UNFCCC) in Paris last year (COP 21), where nations adopted the landmark Agreement, which calls on countries to combat climate change and to accelerate and intensify the actions and investments needed for a sustainable low carbon future, and to adapt to the increasing impacts of the phenomenon.
The two high-level Champions were tasked with heeding the call made at COP 21 and taking forward the idea that mobilizing stronger and more ambitious climate action by all Parties and non-Party stakeholders is urgently required if the Paris goals are to be achieved.
Just last week, on 4 November when the Paris Agreement entered into force, UN Secretary-General Ban Ki-moon convened at UN Headquarters in New York a special meeting with civil society representatives, thanking them for their courage, persistence and leadership in realizing the Paris Agreement and calling on them to “keep up the fight,” to press for action and to hold governments accountable.
Ms. Tubiana and Ms. El Haité have meanwhile set out a detailed agenda to boost cooperative action between governments, cities, business, investors and citizens to cut emissions rapidly and help vulnerable nations adapt to climate impacts and build their own clean energy, sustainable futures. 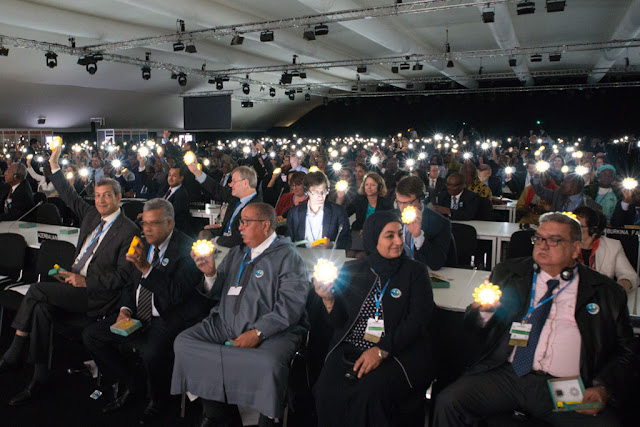 Delegates holding 'Little Sun' lamps during the opening ceremony in Marrakech, Morocco, of the UN climate conference known as COP 22. Photo: UNFCCC
They have also launched a consultative process in order to seek the views of governments and non-State stakeholders on this vision. During COP 22, several thematic days have been planned, including on forests, water, cities, energy, transport and agriculture.
“In Paris, it was about momentum, enthusiasm and political commitment. Now the question is how we will implement and how we will conduct a race against time,” said Ms. Tubiana during a press conference in Marrakech on about the launch of the Champion’s ‘Global Climate Action Agenda’ to mobilize non-State actors.
The [Agenda] “is really the response to this race against time that everyone, governments first, but also cities, businesses, civil society, indigenous people, youth, women movements” is part of, she added.
“We can’t be complacent,” underscored Ms. Tubiana. “We have everything to do, we are lagging behind.” She added that the [Action Agenda] “is a way to accelerate the movement, to accelerate action, develop cooperation, to do it faster, better, cheaper and to get everyone on the same page […] It is about concrete action on the ground, how to transform the transport, how to have better cities, how really to stop deforestation,” she added.
Ms. El Haité stressed that 80 per cent of the decisions on climate action are implemented by non-State actors. “I think it is very important for all of us to recognize that the non-State actors are already moving and there are many [actions], initiatives and coalitions and they are very active,” she said.
“This is the first time we are building a real partnership between the non-State actors and the actors,” she added. “We think it is very important to have these partnerships. We have built for many years walls between the negotiators and the parties and the real world and the non-State actors. Today we need to build bridges between them.”
Asked by the UN News Centre about the link between climate change and the Sustainable Development Goals (SDGs), Ms. Tubiana noted that there is a “single development agenda” and that climate is “a part of that development agenda.”
“No doubt the negotiations on implementation are more advanced in the climate area than in other areas, but it is all the same thing […] There is one agenda that governments must implement and this new development model should really be supported by the citizens, the businesses, the financial sector in each country, and internationally,” she added.