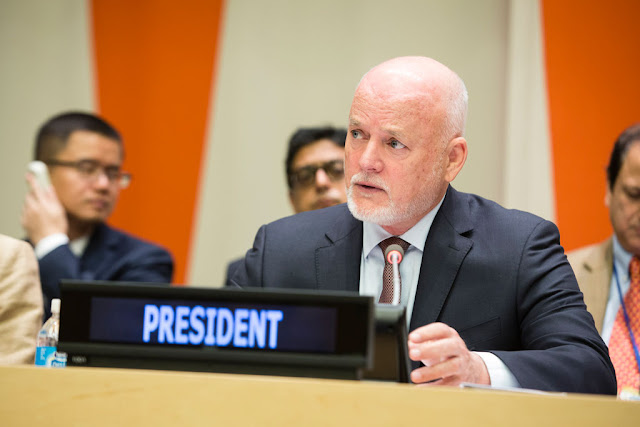 General Assembly President Peter Thomson briefs delegates on the strategy of his office to support the implementation of the Sustainable Development Goals. UN Photo/Manuel Elias


8 November 2016 – General Assembly President Peter Thomson briefed United Nations Member States today on the implementation strategy for implementation of the Sustainable Development Goals (SDGs), the transformative 17-point framework for ensuring peace and prosperity for all on a healthy planet.
He spoke of transforming our world by eradicating poverty and generating collective prosperity, addressing inequalities – particularly with regards to gender and the advancement of rights for women and girls, creating a safer and more just world, and combatting climate change and protecting the natural environment.
The 2030 Agenda “was grounded,” he said, “in the principle of ‘leaving no-one behind,’ ensuring human rights for all, and engaging young people.”
Mr. Thomson, briefing Member States informally, reaffirmed the commitment he made when he took the Oath of Office in June of this year, which he says is “rooted in my deep belief that only through the attainment of sustainable development will sustainable peace and human rights be realized for all.”
“And in turn,” he added, “sustainable development will only be achieved by sustaining peace and the full realization of human rights.”
Mr. Thomson announced that in order to motivate actors at global, regional, national, and community levels, he had appointed an SDG implementation team, to be led by Special Adviser Ambassador Dessima Williams along with experts from the UN Secretariat and secondees from the UN Development Programme (UNDP), World Bank Group, the UN Population Fund (UNFPA), the UN Children’s Fund (UNICEF), and Member States. Ambassador Macharia Kamau will serve as the Special Envoy on SDP Implementation and Climate Change.
The team will focus on three key tracks: 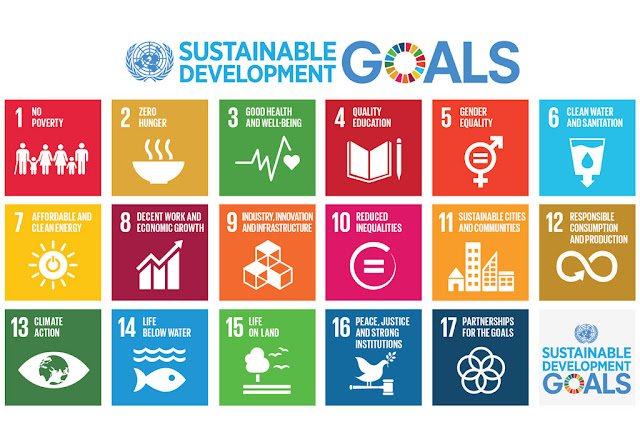 Source: UN in collaboration with Project Everyone

The President of the General Assembly acknowledged that while responsibility for implementing the SDGs lies primarily with Governments, the UN has a central support role in order to see that the Goals are put into action.

“Part of that role,” he explained, “is to activate and align all relevant partners in the universal and integrated pursuit of the SDGs – international financial institutions, multilateral bodies, regulatory authorities, the private sector, philanthropic foundations, civil society, women’s organizations, academia, local authorities, and people everywhere.”
“Dedicated workshops, meetings and events, at both expert and high levels, will be organized throughout the session,” he added.
In order to ensure that the first track – which seeks to raise awareness – is met, Mr. Thomson and his team advocate including the SDGs in school curricula around the world, maximizing online communication, working with young advocates, and promoting high-level advocacy through events and workshops in order to engage the public and attract new stakeholders to the movement.
The second track aims to strengthen the momentum of implementing each goal, for which Mr. Thomson outlined specific objectives and strategies to accompany each of the 17 goals. For example, he spoke of collaborating with the private sector, organizing new meetings, promoting new technologies, securing commitments from new actors, convening leading thinkers and academics, promoting local leader participation in international agenda-setting, and more.
The second track will focus efforts in the six specific following areas:
Finally, track three, supporting the UN and its agencies in order to ensure a maximum contribution to the SDGs at all levels, will be achieved by convening regular briefings with the new Secretary-General, Member States, and the members of the UN Chief Executive Board as well as maximizing the role of the General Assembly in SDG implementation and strengthening the UN’s engagement with civil society, the private sector, and other important stakeholders.
“I hold myself accountable to this Strategic Plan,” said Mr. Thomson, who will report on the progress in July 2017.
To the General Assembly, he said, “I welcome cooperation, partnership, and positive input towards the fulfilment of this Strategic Plan, by and from all those who believe in the need for real momentum to be achieved for the Sustainable Development Goals.”
“A universal effort is required if our world is indeed to be transformed towards a sustainable future for human kind,” he concluded.