[TransportNews] TheSource: Board OKs motion calling for plan for electric buses on Orange Line by 2020

The motion calls for Metro creating an implementation plan for using electric buses on the Orange Line by 2020 and a study to determine the feasibility of using electric buses on the Silver Line. A friendly amendment calls for studying adding electric bus infrastructure to El Monte Station — which serves as one terminus of the Silver Line.
Board Vice Chair Eric Garcetti said that another benefit of going electric would be to eliminate noise pollution — buses powered by compressed natural gas (CNG), he pointed out. Metro’s bus fleet that the agency directly operates is entirely powered by CNG.
Metro Board Member Sheila Kuehl said that she wants Metro to provide more information about the sources of electricity (is it renewable or not) and how batteries would be recycled or disposed. “It’s not enough to say that we’re all electric when we don’t know all the effects of that,” she said. “It doesn’t mean we won’t convert to these vehicles, it means we’ll be prepared.”
Said Board Member Diane DuBois: “I want to know what the carbon footprint is of creation of the batteries,” along with many other questions, including potential medical care for Metro employees who handle the batteries. She said she commends the effort but wanted to ensure the agency covered all its bases.
Garcetti said that he wants to explore all those questions but it’s also important to consider how natural gas is mined and collected (i.e. fracking).
The big caveat is that a funding source will need to be found to purchase the electric buses.
There was also tons of public testimony on this item. A brief synopsis: the environmental community likes the motion, the natural gas industry folks…not so much. 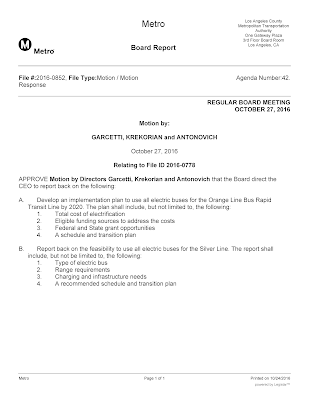