Laura Nelson reports in the Los Angeles Times on opposition to the November sales tax measure for transit (with some quotes from yours truly), localized in the southern part of the county:

But in the southern half of the county, where about one-third of likely voters live, some officials have refused to endorse the measure, questioning whether their constituents would see their fair share of projects.
Leaders in Torrance, Signal Hill and Carson have slammed Metro for not allocating more funds for local transportation needs, including street repairs. Others have groused that the $891-million Green Line extension from Redondo Beach to Torrance, a project discussed for years, is not slated to break ground for a decade.

Voters are free to choose as they like, but it’s hard to be sympathetic to these southern county leaders. As the article points out, they’ll receive plenty of return on the tax in terms of local road, transit and highway funds. 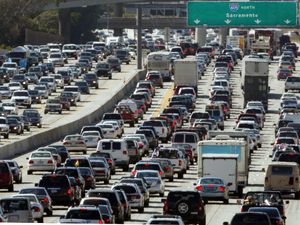 Some southern LA County leaders are evidently not too eager to end this status quo
But more importantly, residents of southern L.A. county are part of the greater region of Los Angeles, whether they work, visit or shop in other parts of the county. They certainly benefit from an urban economy that functions with mobility for all. So it seems short-sighted to try to torpedo a rare chance at achieving the two-thirds voter threshold this November, just because a few of their local, desired projects aren’t rising to the top of the to-do list.

Ultimately, I’d like to see a statewide ballot measure to lower this threshold to at least 55%, so regions like Los Angeles aren’t held hostage to the whims of the few and forced to devise politically motivated transportation plans.  But in the meantime, transit proponents are stuck trying either to placate opponents like these or hope that they can weather the storm come November.

Either way, the vote is likely to be close, evidently with little help from some local leaders.