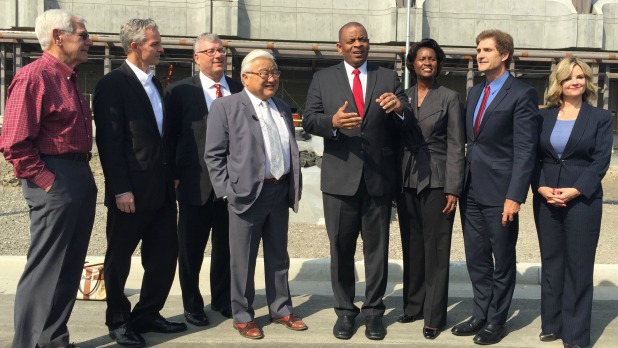 VTA’s BART Silicon Valley Phase I construction site got a visit from U.S. Transportation Secretary Anthony Foxx who saw firsthand what the Federal Transit Administration’s $900 million investment is doing for Silicon Valley – creating jobs and, soon, a new travel option for frustrated commuters.
Trending months ahead of schedule and under budget, the first ten miles of the BART extension is in its final stages of construction. In the coming weeks, the year-long system testing phase will begin with passenger service slated to begin in fall 2017. Secretary Foxx met with transportation leaders and construction workers amongst a backdrop of concrete and steel, recognizing that major transportation projects like BART Silicon Valley will make a big difference for our booming economy. “We’re finding that in fast-growing areas where the population is growing exponentially, having the transportation options available so that [people] can bike, walk or use public transit in addition to using the automobile is how we’re going to get around in the 21st Century,” said Secretary Foxx. “We’re building the future here. This isn’t just a five or 10-year project, this is a 50-, 60-, 70-year project.” Foxx was asked to reflect on the challenges we face as a country when it comes to meeting mobility needs and funding them: “The country has increasing mobility challenges. The way you deal with it is you create choice. That’s what you’re doing here. A trip from the other end of this line to this terminus is going to be the same time every trip, and that’s something you can’t say about the private automobile today.” “In terms of funding, are we meeting our challenges? No, we’re not meeting our challenges. But what you’re doing here by investing in yourselves and competing favorably against other parts of the country for precious federal transportation dollars is and should be instructive to the rest of the country. It’s a great model for success.” Foxx then boarded a VTA bus with U.S. Congressman Mike Honda, credited for inviting the Secretary to the Bay Area, to tour the future Phase II alignment and learn more about the planned four stations and the development around them. He was later joined at a press conference in Santa Clara (terminus of future BART phase) by Congresswoman Zoe Lofgren, San Jose Mayor Sam Liccardo, VTA Board Chair Cindy Chavez, Silicon Valley Leadership Group CEO Carl Guardino, Caltrain CEO Jim Hartnett, Santa Clara City Vice Mayor Teresa O’Neill and Councilmember Pat Kolstad, and South Bay Labor Council Executive Officer Ben Field. “I want you to know how incredible it is to see a region coming together, putting skin in the game to help advance its transportation mobility needs,” Foxx stated to the press. “What you have done in terms of defining the future and figuring out how to address those mobility issues, putting your money on the table and partnering with the federal government is a success story that I hope will continue being told long into the future.”Check out the days event through our Storify link here, or below.