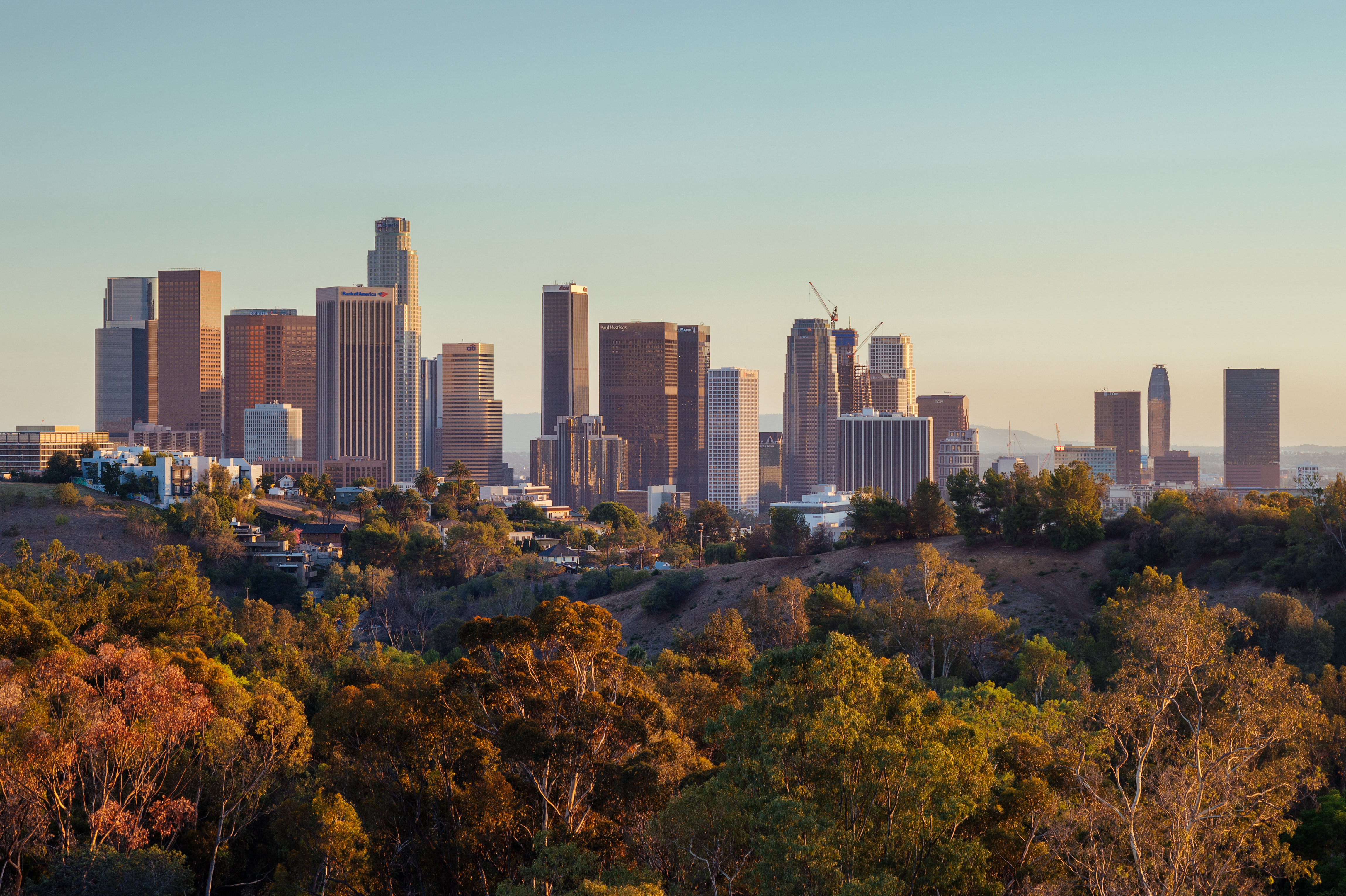 On behalf of Metro, I’d like to extend a warm welcome to members of the American Public Transportation Assn., who are in Los Angeles this week for the trade group’s annual meeting.


There goes an old saying: L.A. is a tough place to visit but a great place to live. As you may have heard, in days of yore, most visitors could only reach most L.A. destinations by sitting in a car and traffic.
Well, the traffic hasn’t gone anywhere. But at least now there’s an alternative to it. We’ve built 105 miles of light rail and subway in the past 26 years, including two light rail extensions that opened earlier this year. Metro has the nation’s second largest bus fleet, there are a couple dozen other muni bus providers in L.A. County, a 500-mile-plus commuter rail network in the region and plenty of Amtrak to go around.
There’s also car sharing, ride hailing, bike lanes and bike share and those old fashioned things called taxis. Downtown L.A. has gone from a sprawling collection of parking lots to a place that’s suddenly interesting and well-cultured. Of course, there are 87 other cities in ginormous L.A. County and many of the downtown districts in those cities have in recent times also been revived, repackaged and repeopled.
A couple more sayings come to mind: “you have to drive everywhere in L.A.” and “no one ever walks in L.A.” Neither were ever really true. There are plenty of neighborhoods that are perfectly walkable. If anything, both those sayings were another way of saying Southern California is: 1) behind its East Coast cousins on building rail transit, and; 2) a 10-county megaregion with 22 million people and, yes, a certain amount of driving is often required in such a large space.
Nothing against panel discussions on transportation…but I encourage you to get out, poke around our region and see what you think. Some things you may like, some you may not, but maybe there are some ideas worth taking home. I’ll tell you right here, right now there’s no getting around the fact that homelessness is an issue in our region — in some part due to our climate.
Transit and Geography 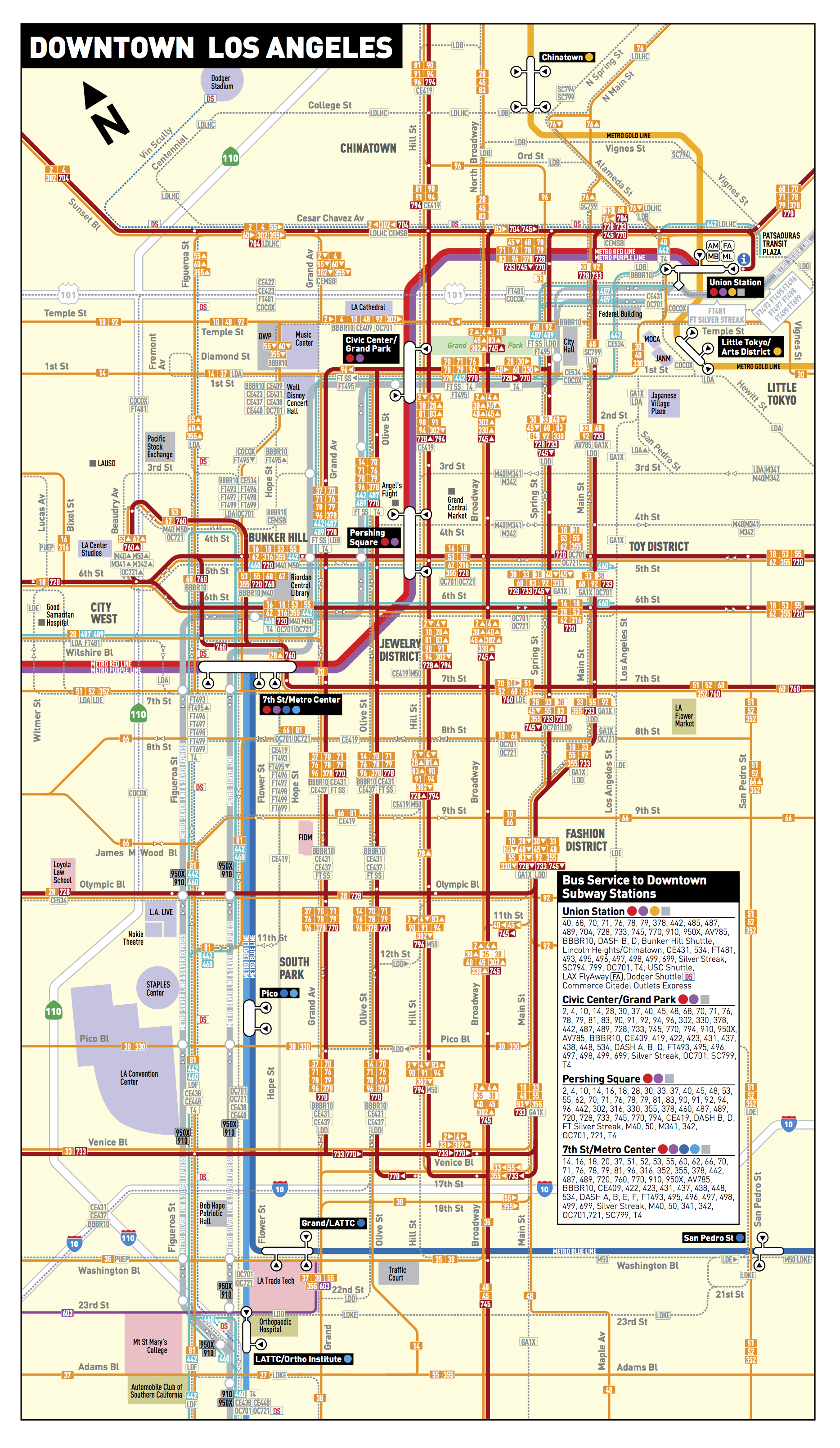 First, some practical stuff. Below are maps of Metro’s downtown service as well as a map of Metro Rail, busways and commuter rail in our region. APTA is at the J.W. Marriott at L.A. Live. The nearest rail stop is a .4 mile walk to Pico Station, which is shared by the Blue Line and Expo Line. Walk east on 11th Street and turn right (south) on Flower Street to reach the station.


The regular adult fare on Metro is $1.75, which includes two hours of free transfers. In order to board a train or bus, you’ll need a reloadable TAP card. They are available for purchase at TAP vending machines which are located at every rail station. A day pass is $7 and a seven-day pass is $25. All fare information is here.


Planning a transit trip? Our new trip planner is in the testing phase — you can try it here. The transit planners on both Google and Apple maps also do a pretty good job.


The city of Los Angeles’ has their own bus system called the DASH that does a great job serving downtown L.A. and many parts of L.A. Their system map is below. Fare information is here; you can used stored value on a TAP card to pay DASH fares. 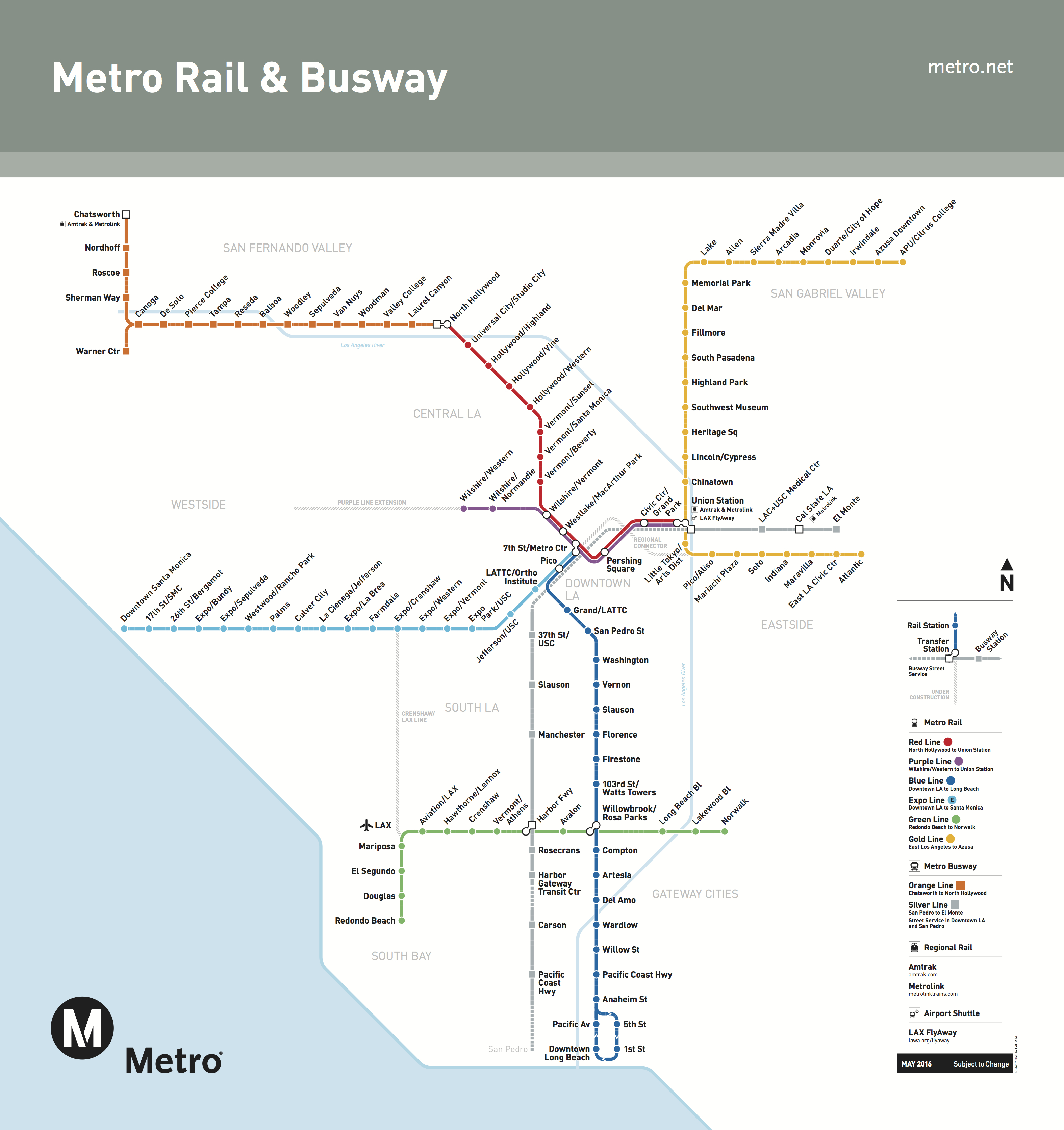 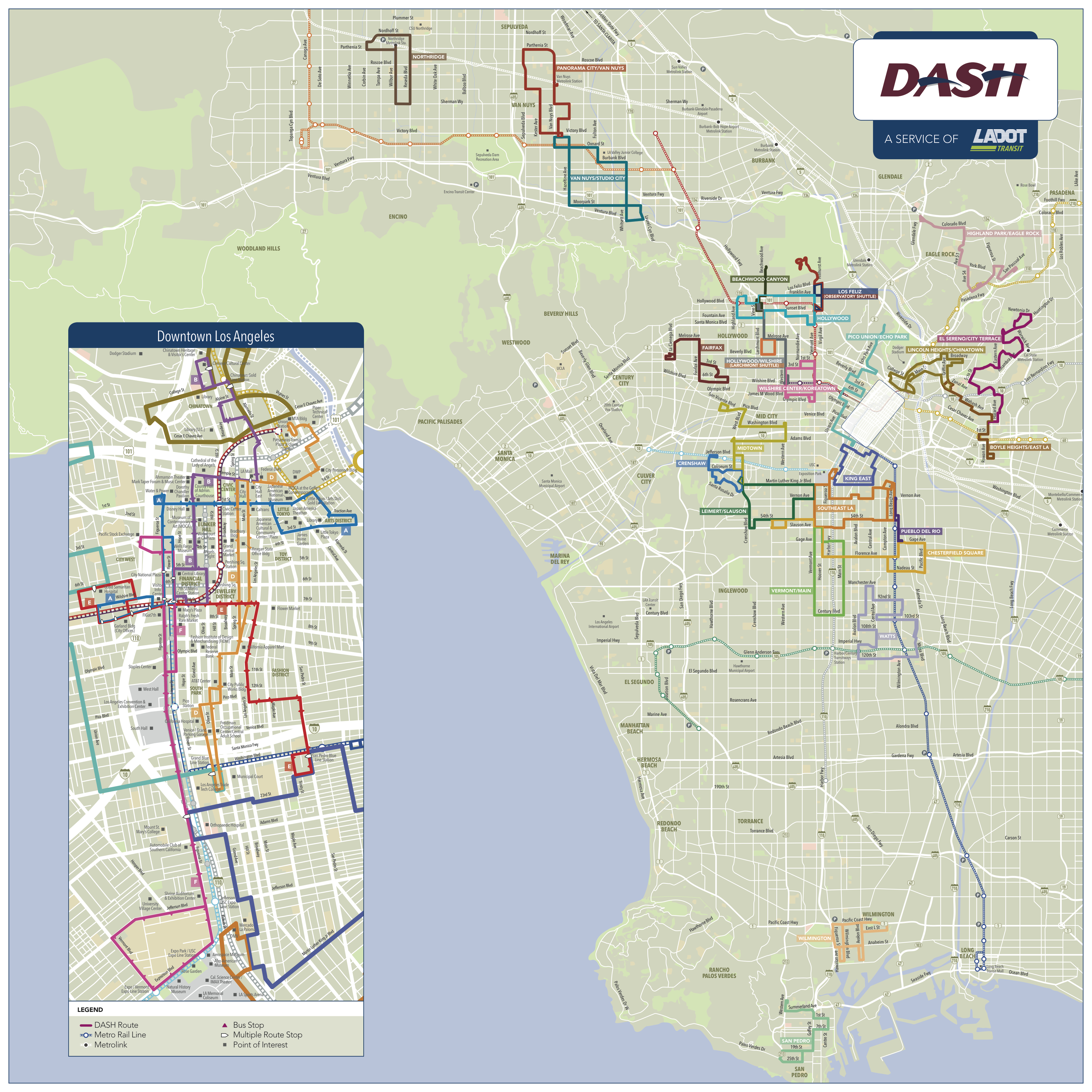 Metro and the Internet
•Metro started this blog in late 2009 for a couple of reasons. One, the agency was seeing less news coverage due to a shrinking local media. Two, L.A. County voters had approved the Measure R sales tax increase the previous year and the agency wanted a cost-effective and easy way to push info to the public about the various projects and programs in the measure. As far as we can tell, the blog is now one of the most frequently updated and visited local government blogs in the U.S. Of course, it helps that we serve a county with 10-million-plus residents.
•Metro is also on Twitter, Facebook, Instagram, YouTube and Flickr. We’re also dipping our toe into the Snapchat waters. Many Metro projects also have their own Twitter streams and/or Facebook pages. For visitors, Twitter is perhaps the most relevant — it’s where we post service alerts and other timely info that you may need.
•We also like to think of the blog and our social media streams as ways to stay accountable to taxpayers and to present a more unvarnished view of the agency. We tell reporters that a good way to track our services and customer response to them is to follow us on Twitter. The same goes with the blog. While we moderate comments to prevent unseemly things from getting posted, we don’t censor for criticism.
•Questions? Email me. I’ll also be attending some of the conference and am happy to chat about the world of government PR as I’ve seen it from both sides: a reporter for one of the local newspapers and a government-issued blogger.
Where do we recommend you go?
I know that Metro is offering technical tours of many of its facilities — and those should be pretty informative. But if you have some downtime and want to free range it, here are a few suggestions from the social media staff. Basically, these are places we like and are priced right for the conscientious transit agency employee:
•DTLA — like our region — is sprawling and basically measures three miles in both directions with many neighborhoods within. Metro just launched a bike share program in DTLA this summer — an easy way to get around. You just need a credit card; it’s $1.75 for each 30 minutes of riding.
If you want to see L.A. channeling its inner Portland, check out the Arts District. I’m a big fan of Angel City Brewery, the Pie Hole and Wurstkuche, which provide the triumvirate of beer, pie and sausages/fries, respectively, and are within a stone’s throw of one another and near the Gold Line’s Little Tokyo/Arts District Station.
If you’re looking for some outdoor time, the relatively new Grand Park in the Civic Center area is a nice place to sit with a coffee and book. Same goes for the plaza at the Music Center and the lovely gardens in back of Disney Concert Hall. And you may also be able to snag free entry to The Broad, the contemporary art museum that opened earlier this year. The Red and Purple Line’s Civic Center/Grand Park Station is near all the above.
•Take the Gold Line from Union Station to South Pasadena and go for a stroll. South Pas is basically small town America that is an easy 15-minute train ride from Union Station with a bunch of restaurants near the train platforms. Mike & Anne’s is a great spot for dinner with a nice outdoor patio and is a two-minute walk from the station (heads up: they’re closed Mondays). Other places I like that are all an easy walk from the Gold Line station: Gus’s Barbecue, Senor Fish, Heirloom Bakery & Cafe (for breakfast and lunch), Griffins of Kinsale, Bistro De La Gare and Communal.
•I also think checking out both of the rail extensions that opened this year may be interesting. The Gold Line to Azusa (about 30 minutes beyond South Pas) has six new stations that serve a decidedly suburban setting — which comes with plenty of first-last mile challenges. The Expo Line to Santa Monica is a different animal. Santa Monica has long been  a major regional and national tourist hub and has seen a development boon in recent times. There are a ton of restaurants within walking or biking distance of the Downtown Santa Monica Station. My favorite is the low-key Fritto Misto, two easy blocks from the station. If you want to bike share it, I’m also very fond of the steak, seafood and drinks at The Galley on Main Street, about a five- to 10-minute pedal from the Expo Line.
•If you’re the early morning type and need to stretch your legs before a full day of scintillating talk about transportation funding, try the hike to Mount Hollywood (not to be mistaken with the nearby Hollywood sign). The easiest way is to begin at the Griffith Observatory above Hollywood. And the easiest way there is to Zipcar or take the Red Line to the Hollywood/Western Station and Lyft/Uber it from there. The views are often very good from the top of the peak, although we’ve had some recent foggy mornings.
•Below are some of our favorite places. But the L.A. area is a big place and there are a ton of places to eat — this is really good restaurant town. The L.A. Times’ Jonathan Gold is considered the most authoritative restaurant critic. Here’s his list of the area’s top 100 eateries. 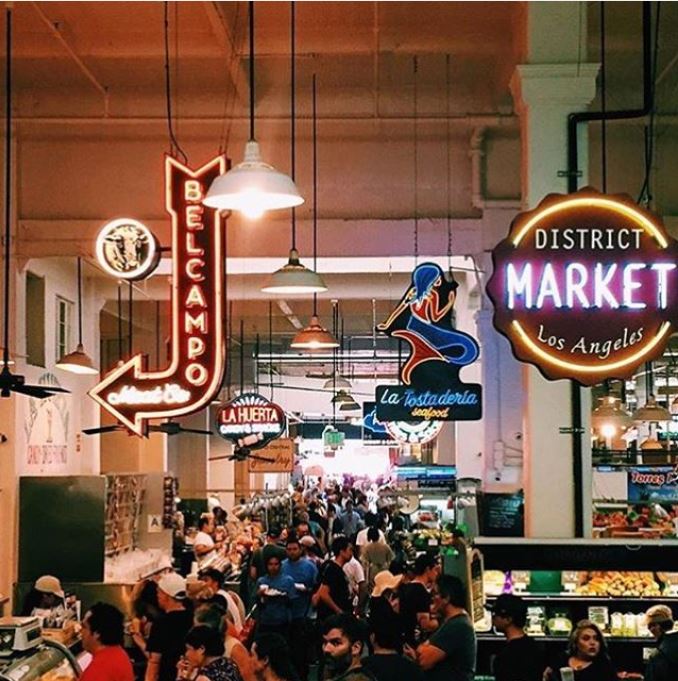 Share your L.A. transit experiences
Finally, please share your observations and experiences of the L.A. transit and traffic scene while you’re in town. How does our transit system measure up? Is traffic better or worse than you expected? What’cha think of downtown L.A.? Please tag us @metrolosangeles and we’ll try to do a social media roundup from APTA members.