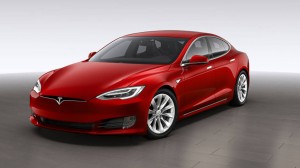 The fastest car in the world, 0 to 60 mph.
Tesla is at it again, this time bumping their biggest battery pack size from 90 kilowatt hours up to the century threshold at 100 kwh.  Why is this a big deal?  It gives the Model S a range of over 300 miles now, which marks the first time an electric vehicle in production can get you that far on a single charge.

Or as Elon Musk says, you can now get from Los Angeles to San Francisco on a single charge (actually that’s dubious given the mountains, and at best would only get you to Los Angeles County, but still).

As an added bonus, the Tesla P100D is now the fastest car in production in the world, able to go 0 to 60 mph in 2.5 seconds (and third fastest ever).

But the range is the most noteworthy thing.  Here we are in 2016, and you can have a 300-mile range electric car.  Granted, the cost is prohibitive for all but the most wealthy, but prices are coming down steadily.  It won’t be long, given current trends, before an electric vehicle could have a range of 600 or even 700 miles.  And once the price comes down on those cars, maybe by the middle or end of the next decade, a lot of discussion about “range anxiety” and access to public charging infrastructure becomes largely moot.