California’s cripplingly high housing prices in its big cities along the coast are caused by low supply, dating back decades, relative to population and job growth.  But what is causing that shortage?

There are a number of theories, such as CEQA, Prop 13, and restrictive local zoning, but remarkably little evidence or study on this important question.  Into this void, researcher Kristoffer Jackson recently conducted a study that links the increase in local land use regulations to the increase in housing prices:

California cities’ use of land-use regulation (including various zoning rules, residential density restrictions, and limitations on growth) increased precipitously from the mid-1980s to the early 1990s (see figure below). In a state known for making extensive use of voter initiatives, this increasing level of regulation was the result of rising anti-growth sentiment following periods of rapid population growth. Unsurprisingly, the most highly regulated communities back then—in the southern coastal region and in the San Francisco Bay area—still top the list today.

Comparing the rate of construction in cities that implement more land-use regulations to the rate in cities that implement less of it, I find that each additional regulation reduces a city’s housing supply by about 0.2 percent per year. The average California city used in my analysis has a population of roughly 55,140 with 21,740 homes. For such a city, adding a new land-use regulation reduces the housing stock by about 40 units per year. Reductions in a city’s housing stock are the result of significant declines in the rate of new-home building. The number of new homes built each year is reduced by an average of 4 percent per restriction. These reductions in new construction (and the overall housing stock) come through fewer single- and multifamily housing units, but the effect on the latter is much stronger, with an average of 6 percent fewer permits issued per regulation.

The study includes this helpful chart: 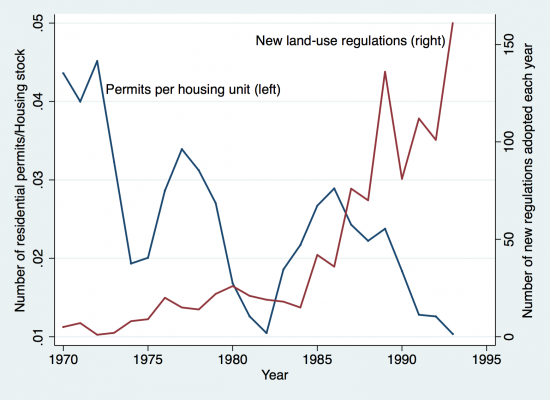 And as a related source of data, the UC Berkeley Terner Center released a development “dashboard” that tells you how much more housing production you could get with various policy changes in the San Francisco Bay Area.

All told, this research points to the huge impact that local land use policies have on restricting supply and driving up prices.  Yet even Governor Brown’s proposal for “by-right” approval of new housing consistent with local zoning appears to have been shot down by labor and environmental groups, concerned about the loss of leverage over proposed projects — even if they conform with local zoning (to be sure, there were some legitimate concerns over the details, but the broad approach of the proposal is hard to argue with).

And so we find California to be a state tied in knots, with most communities preventing new development and therefore pushing it to the fringes, all while making the best of its cities unaffordable to new generations and most new arrivals.

How to unravel it?  Further study on the causes of the housing shortage would be helpful, as well as an understanding of what policies have been the most detrimental to supply and why local communities enacted them.

But at the end of the day, it’s likely going to take state action to overturn some of the most draconian local regulations.