Prof. Ethan Elkind: The Future Of California’s Cap-And-Trade Beyond 2020

As the Sacramento legislature debates SB 32 to formally extend the state’s greenhouse gas reduction targets to 2030, a big piece of the political puzzle is the cap-and-trade program.  Namely, will the Air Resources Board have authority to continue the program beyond 2020?

There are a number of scenarios at play:
The final alternative, from a political standpoint, is to pass SB 32 on a majority vote, giving the Air Resources Board authority to issue command-and-control regulations to limit emissions from the oil and gas sectors.  Presumably, the industry would much prefer a market-based approach to command-and-control, which would bring them back to the table with their legislative allies to re-authorize cap-and-trade beyond 2020.  But who knows.  And there’s also the wild card of the governor placing a 2018 ballot measure before the voters on the issue.

One thing for sure: if the legislature does not resolve the situation soon, it will likely fall to the courts to decide. 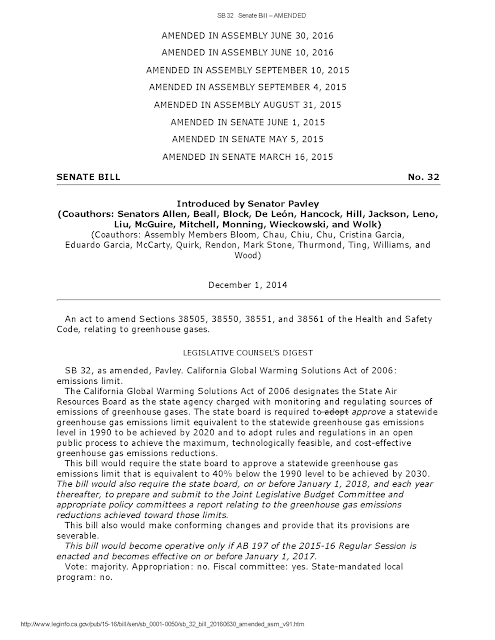