Prof. Ethan Elkind: Could Chevy Beat Tesla To The Punch On A Mass-Market EV? 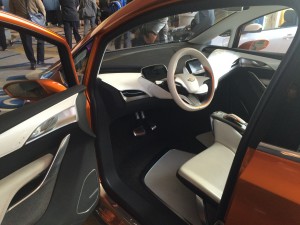 Chevy Bolt prototype interior
The Tesla Model 3 got a lot of hype and pre-release deposits, but Chevy may quietly beat Tesla in bringing a 200-mile range electric vehicle under $40,000 to market.  The new Bolt will supposedly be in production next year, and Car and Driver magazine just reviewed the prototype car with the Bolt’s chief engineer Josh Tavel:

Tavel is still tweaking various calibrations since Bolt production and sales are months out, but he’s clearly proud of what his development team has achieved. This 37-year-old engineer began amateur competition at age five on BMX bikes and continued with minimal interruption to his current SCCA Spec Racer Ford campaign. A deeply ingrained racing mentality may be why Tavel hated to sacrifice any torque to diminish tugs on the steering wheel, and why the Bolt’s every motion is well managed when you toss it around. Without imposing harshness, the ride is firm to help keep body roll in check during full-boogie maneuvers. The low-rolling-­resistance Michelin Energy Saver A/S 215/50R-17 tires absorb patched pavement without recoil and break away gently when tasked with a surprise lane change.

The review is overall very positive, although it notes some of the flaws related to slow charging and driving experience, when compared to the new Tesla.

Still, at the right price and with dependability that Tesla may struggle to offer, this car could put electric vehicles on the map for average consumers in a big way.