CalSTA Blog
Be in the know about California's transportation policies.

Sacramento –  Tuesday, the California State Transportation Agency (CalSTA) announced 14 recipients for the 2016 Transit and Intercity Capital Program (TIRCP) grants.  The group of projects moves forward the Brown Administration’s focus on reducing harmful greenhouse gas emissions while advancing the state’s public transportation system. This year’s awards total $390 million in competitive grants made possible through the state’s Cap and Trade auction proceeds.
“This investment of Cap and Trade dollars is really about transforming this state’s transportation system to create jobs, reduce harmful emissions, and expand mobility options so Californians can get around as efficiently and conveniently as possible,” said CalSTA Secretary Brian Kelly.
“Today we invest in California’s future—improved bus services in Fresno, BART to San Jose in the Bay Area, expanded ACE service to better connect the Northern San Joaquin Valley with Silicon Valley, new streetcar systems in Sacramento and Santa Ana, electrified transit services in the Bay Area and Southern California, vital improvements to LA Metro’s Green, Purple and Red lines, expanded rail services between Southern California cities and the Central Coast, and a new rail service connecting a major university with downtown San Bernardino.
California’s transportation future is about providing good, clean travel options while expanding access to mobility and economic opportunity for all.  This Cap and Trade program delivers today and promises to deliver much more in the future.  I’m proud to put these vital transportation dollars to work for all Californians.”
41 applications for funding from around the state were submitted for consideration this year. The 14 projects selected, valued at more than $3.8 billion, will reduce more than 4.1 million tons of CO2 statewide and 13 of the 14 recipient projects directly benefit disadvantaged communities.
Looking ahead, through Senate Bill 9 (Beall, 2015) CalSTA will be adopting a 5-year program of projects by July 1, 2018.  The 5-year program calls for larger, more transformative projects to be funded.  With that, the state anticipates being a long-term funding partner to see transformative projects come to fruition, for example:
CalSTA will hold workshops in late 2016, continuing into 2017, to receive public input on guideline development for the 2018 program.
Project funding for the 2016 awards will be supported by Cap and Trade auction proceeds from eight anticipated auctions in fiscal year 2016-17 and 2017-18, so cumulative auction proceeds are more important than the amount of revenue received from a single auction.
If the Legislature directs additional funds to the TIRCP in this legislative session, CalSTA may increase funding for announced awards and/or fund additional projects submitted as part of the 2016 program.
A complete list of this year’s recipients can be found here: 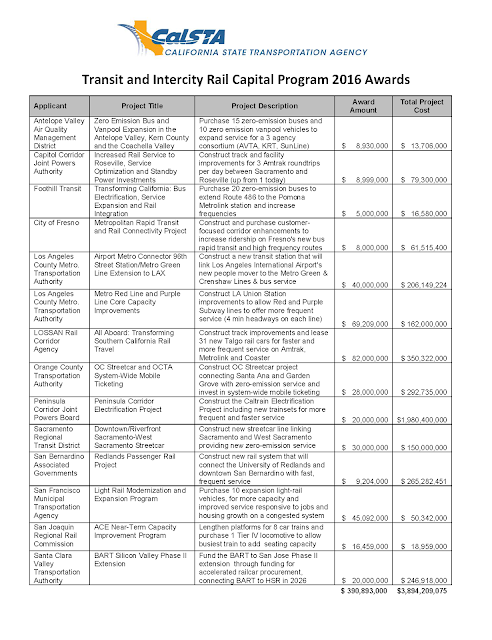