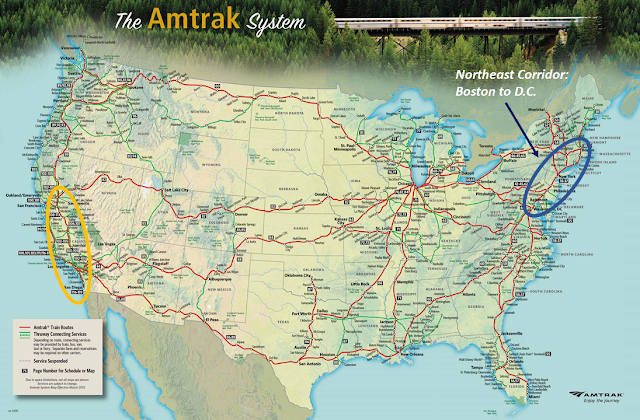 Despite being from Los Angeles, I never obtained a driver’s licence, nor even have the desire today to go for it today at age 33.  Most long-distance travel has been through Amtrak.  Occasionally, I will fly, ONLY if it is required; otherwise, I HATE taking part in such a environmentally-destructive transport form.  This does not even include the unbelievable police state in place with flying, part of why I did not fly for over five years (2010-15).

Having been an Amtrak patron since 2004, I have always enjoyed being able to sit back, enjoy the ride, and even complete homework or any important tasks, as opposed to being on transit, watching for my stop.  Since joining Amtrak Guest Rewards in 2008, I have been doing my best to patronize the system more, and have been rewarded as an “Select Executive” member, earning a minimum of 20,000 “tier-qualifying points” points per year.  (Until the new version of the program launched this year, I was quite euphoric about it; I will discuss in another posting the great inequity that exists in the new rewards system, as well as, why it just sucks.)

Having also been a Student Assistant at Caltrans’ Division of Rail in 2008-09, I was fortunate enough to learn the administrative details and technicalities between Amtrak service overall, as opposed to state-supported routes - like those here in California.

In all, I enjoy Amtrak, and encourage anyone I can to take the train.

However, with the recent news of the the Northeast Corridor’s $2.45 billion Congressional loan to upgrade infrastructure, I have to ask, where the hell is California’s loan?

Despite California’s auto-oriented guise, Golden State travelers have done their best - even during the recession - to maintain high-ridership on the State’s three supported route - Capitol Corridor, Pacific Surfliner and San Joaquins. From 2009 to 2015 - latest available figures, Amtrak ridership in California nearly tripled.  With the three state-supported and four additional long-distance routes, California makes up over 20% of Amtrak’s ridership.  These routes rank in the top-ten for ridership nationwide - Pacific Surfliner #2, Capitol Corridor #3 and San Joaquins #6.  California is also home to six of the nation’s 25 busiest stations Amtrak - Los Angeles, Sacramento, San Diego, Emeryville, Irvine and Bakersfield; we actually have the most stations in that listings.  California is a rail-focused population, as these routes have proven themselves to be quite competitive with traffic - Capitol Corridor and San Joaquins, as well as, an unmatched view for coastal destinations - Pacific Surfliner.

Where is our multi-billion dollar infrastructure loan, given the massive and expanding ridership of California routes? 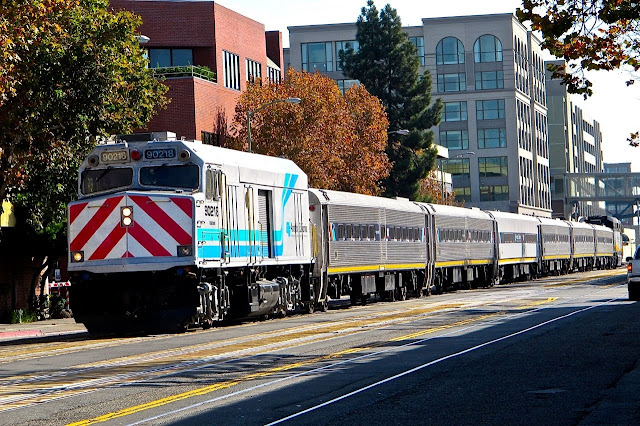 California’s rail cars are old, and definitely and in need of upgrades.  Part of the reason I do not utilize the San Joaquin as much, is that they now use old New Jersey Transit - "comet" - cars. (Pictured right.)  These cars require far greater effort for mobility-impaired passengers, they are loud, rickety, uninviting, and because their doors are not automatic / electrified, they actually slow the schedule for boarding; standard “California Cars” have eight cars to board/alight at each stop, but these new cars usually have two. These cars are more than likely used for train schedules with reduced ridership, but regardless, why does the world's 6th largest economy settle for New Jersey's leftovers?


Amtrak has introduced Acela, Metropolitan and First-Class lounges ("lounges") around the country, but only two are on the entire west coast - Portland and Los Angeles.  Despite the L.A. lounge's policy of now only allowing ticketed-passengers to enter - which slaps the face of non-ticketed Select Executive members who were told their level gets them access, I have enjoyed spending time in the lounge.  The lounge is also the first area I took my parents to recently on a trip to San Diego - site of their honeymoon.  Both parents were born and raised in L.A. - Pasadena and Hollywood, and were indoctrinated into the auto-only culture.  Both are now retired and disabled, and LOVED their time in the lounge, as well as, their personal escorts taking them from the lounge to Pacific Surfliner's Business Class.  They are now planning a trip on the Surfliner to Santa Barbara, and have been excited by L.A.’s new light rail extensions, as well.

Why can’t more Californians enjoy the same experience my parents enjoyed, especially if these passengers are paying more for their ticket / investing more in their travel with sleeper or Business Class accommodations?  Would it not make sense to open a lounge in Emeryville and Bakersfield, allowing all routes to be served by a lounge?

I use Emeryville, as it is one of the highest ridership stations on the Capitol Corridor route, and would recommend Bakersfield for the the San Joaquin route; although Sacramento has higher patronage than Bakersfield or Emeryville, Sacramento only serves four of the fourteen daily San Joaquin trains - where Bakersfield serves all fourteen, and Emeryville is a greater connection point. And if we wanted to go big in all of this, why not lounges at San Diego, San Jose and Sacramento, thereby providing like-amenities higher-priced ticketed passengers might expect from airline travel?

California has around 14,100 Amtrak employees - second to Pennsylvania.  Yet, when comparing the Northeast Corridor to California, the Golden State is home of two- to fourteen-times more employees than any of the other seven corridor states - MA, RI, CT, NY, NJ, DE and MD.  California even surpasses Amtrak's headquarters in employment - 1,000 for Washington D.C.

All three of California's routes also receive the majority of their funding from Caltrans / State of California, and all managed by local agencies - further reducing Amtrak’s responsibilities of route administration.

Although California's Amtrak routes do not serve the nation's Capitol, there should be no reason why the Golden State should not receive the same funding expanse and long-term investment as the Northeast Corridor, especially given the ridership growth and plans to complement high-speed and intercity rail services.

If Amtrak does not want to do what it should financially for California's rail services, then its high time the State seek full route ownership, making sure our services never receive anyone's leftovers.


TransportiCA has sent invitations to related agencies and Amtrak for potential comment, and await their response.