What started with Proposition A in 1980, continued with Proposition C in 1990, and then bolstered with Measure R in 2008, will now be tested once again officially as Measure M in November.  I’m talking of course about Los Angeles rail transit plans, which once again hinge on another voter-approved sales tax measure.

The measure promises a host of new transit plans for the region, as illustrated with this map as a side project from a Nelson/Nygaard employee: 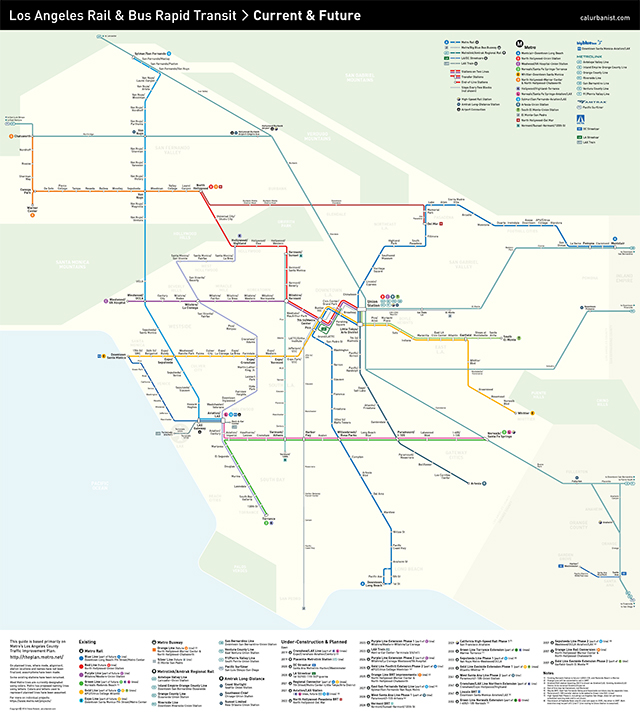 A few notable things stand out about this measure. First, there is no sunset date, which is a departure from Measure R’s 30-year limit. The justification is that the measure includes operating funds for transit, which address a need that doesn’t sunset.

Second, the new projects cover some vital links in the region, most prominently a public-private toll road and rail tunnel connection from the Westside to the Valley underneath the Sepulveda Pass. It also includes rapid bus down the high transit-usage Vermont Avenue and Lincoln Boulevard along the coast and connections to the eastern part of the county (including the gap between the Green Line in Norwalk and the Metrolink station).

There will be a battle royale to try to surmount the two-thirds voter approval hurdle this November, and the plan clearly contains a lot for every part of the county, including some unfortunate projects (the “High Desert Corridor” freeway stands out as particularly egregious). But it’s hard to blame Metro for trying again, given the success in 2008 and near-miss in 2012 with Measure J, along with the scale of the need.


(Source: http://www.ethanelkind.com/a-map-to-illustrate-l-a-metros-bold-plan-for-measure-m-this-november/)
Posted by Anonymous at 17:42