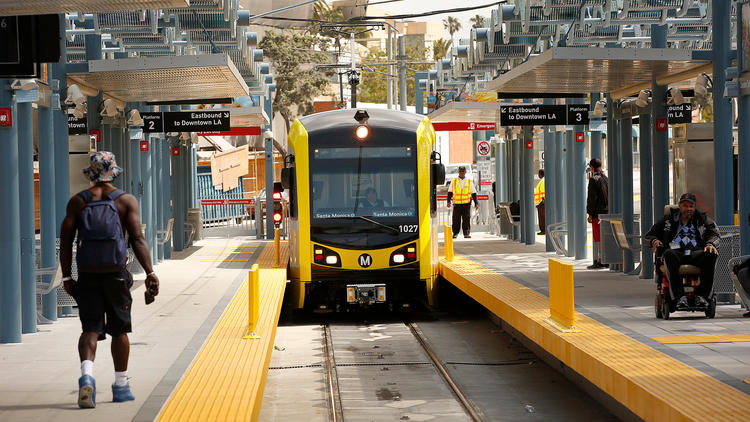 
As Los Angeles County voters will be asked in November to approve a half-cent sales tax increase that would continue indefinitely to fund a major expansion of Southern California’s transit network.
The Board of Supervisors unanimously agreed Tuesday to add the Metropolitan Transportation Authority’s tax increase proposal to a ballot already crowded with other initiatives.
The proposal, approved by Metro’s directors in June, would generate at least $860 million per year to expand the county’s rail network through the San Fernando Valley, the San Gabriel Valley and the Sepulveda Pass.
The so-called Los Angeles County Traffic Improvement Plan would also fully or partially fund 10 new highway projects, including an extension of State Route 71 and a new carpool-lane interchange between the 405 and 110 freeways.
The proposal would raise the county’s base sales rate to 9.5% and push the rate to 10% in some cities, including Santa Monica and Commerce.
The half-cent tax would double to one cent in 2039 to replace the revenue lost when Measure R, another half-cent sales tax, expires. The one-cent tax would then continue indefinitely.
Our region has some of the worst traffic jams and smog in the country. We must act now.— Glendora Mayor Gene Murabito

Metro officials have requested that the initiative be called “Measure M,” but a name has not yet been formally assigned.
During nearly an hour of public comment at the Board of Supervisors’ downtown meeting Tuesday, representatives for local municipalities, labor unions and advocacy groups voiced their support for the measure.
“Our region has some of the worst traffic jams and smog in the country,” said Glendora Mayor Gene Murabito, the president of the San Gabriel Valley Council of Governments. “We must act now.”
Supervisor Don Knabe said he agreed that the measure should be put on the ballot, but voiced concerns about a sales tax that would continue indefinitely. The measure would be the third tax that funds Metro without an expiration date.
This is an open check. This is a forever tax.— Los Angeles County Supervisor Don Knabe

“This is an open check,” Knabe said. “This is a forever tax.”
If voters approve the increase, Metro will receive two cents for every dollar spent in the county.
Some transit boosters fear that a ballot crowded with other tax initiatives could hurt Metro’s chances. The sales tax proposal requires a two-thirds vote to pass — often a high hurdle.
County voters will also be asked to approve a parcel tax for parks and a community college bond measure.
City of Los Angeles voters will weigh a proposal to issue $1.2 billion in bonds to build housing for the homeless.
laura.nelson@latimes.com
For more transportation news, follow @laura_nelson on Twitter.
(Source: http://www.latimes.com/local/lanow/la-me-ln-metro-sales-tax-measure-20160802-snap-story.html)
Posted by Anonymous at 14:11