Co.Exist: We've Used Up The World's Resources For The Year And There Are Still 145 Days Left

TransportiCA Relevance: The need for renewable energy sources for transportation, that do not destroy our irreplaceable planet.

August 8 is Earth Overshoot Day—the day when we start using more resources than the planet can replenish in a year. It's getting earlier and earlier every year.

Earth Overshoot Day lands on August 8 this year. Last year, it fell on August 13. Each year, the date gets earlier, signifying how humanity is running through its ecological budget at an ever-faster rate. In 2000, the date was still in September.
The Global Footprint Network, a California research group, calculates how much "annual demand on nature exceeds what Earth can regenerate in that year." It looks at the ability of oceans and forests to absorb CO2 emissions (60% of overall demand) and how quickly oceans and forests replenish and grow. 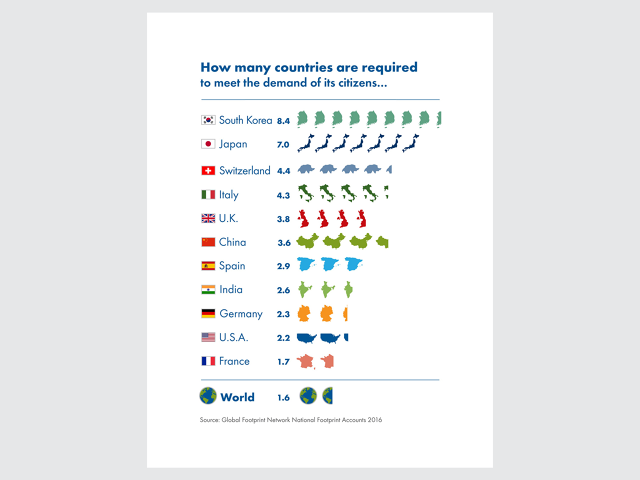 GFN blames the shortening horizon on population growth, rising carbon emissions from energy production, and mismanagement of our oceans and forests. It calculates how much of the world's area is taken up with ocean and forest and then what the absorption rate is for CO2 from those stretches. Each ton of CO2 that's sequestered doesn't go into the atmosphere causing climate change. GFN shows how individual countries are, or are not, living within their means. Canada and much of Latin America are "creditor" nations, while the U.S. and countries in Europe and most of Asia are in "deficit." Australia has a heinous footprint. China is very in deficit due to its intensive use of coal. France and Switzerland have lower per-head footprints because of their relatively clean energy systems.
Mathis Wackernagel, CEO of the GFN, says this type of replenishment-rate thinking is very slowly gaining acceptance. The big climate agreement in Paris last December was notable for committing the world to "net-zero emissions" by 2050. That doesn't mean no emissions. It means the amount of carbon emissions Earth can handle given the absorption rate of oceans and forests that act as "sinks."

"What we do is consistent with the Paris intent," he says. "The public discussion is extremely weak compared to the Paris goals, but that's exactly what it says. If we burn fossil fuels and emit CO2, we need to be able to sequester the CO2 and neutralize it."
In GFN's thinking, carbon emissions are a relative concept: They harm only so much as we destroy our oceans and forests at the same time. "This [metric] recognizes that the atmosphere is not separate from the land," Wackernagel says. "They interact and need to be managed together."

(Source: http://www.fastcoexist.com/3062607/weve-used-up-the-worlds-resources-for-the-year-and-there-are-still-145-days-left)
Posted by Anonymous at 06:41