The question is: How do we get people out of their cars? Cities around the world are working on a wide variety of inspiring plans. 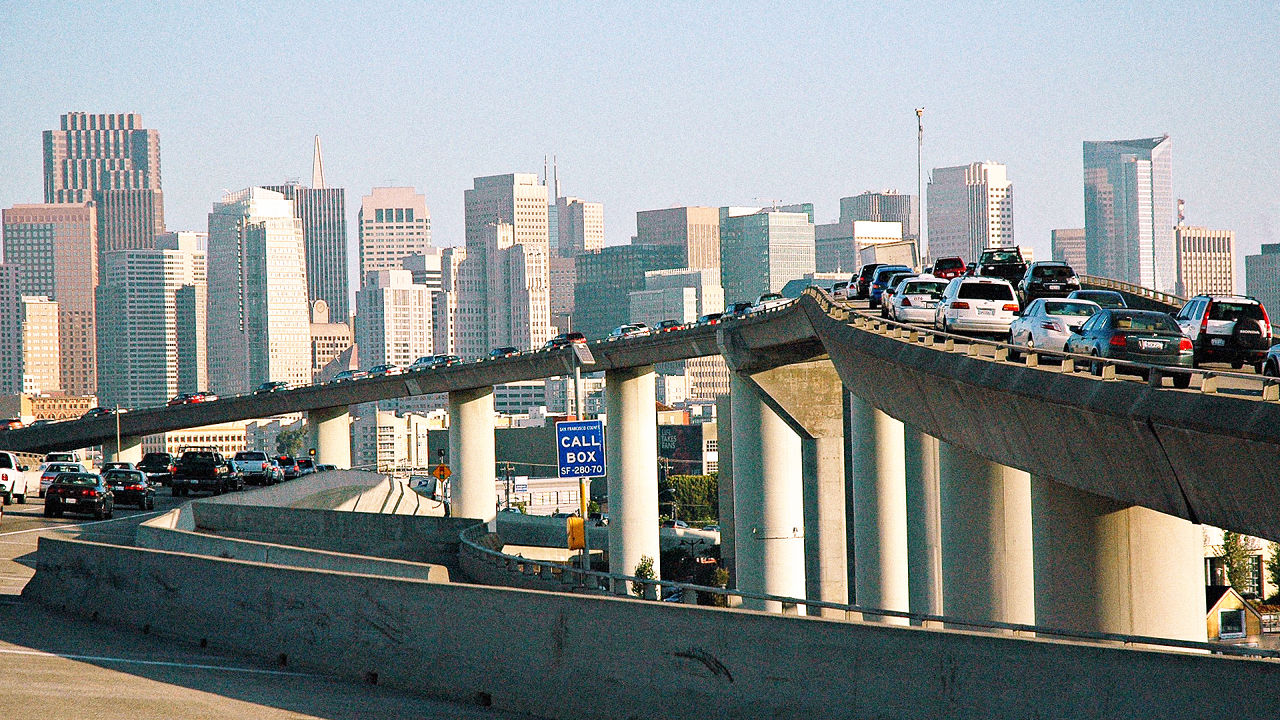 
If you talk to people who've come from the provinces and backwaters to the big city, there's one thing they all complain about: the transportation.
Whether it's continuously starting and stopping your car in the concertina motion of heavy traffic or standing pressed into a stinky armpit on the subway, moving around the city can be maddening. Every morning, for example, it takes me an hour of hassle and harassment to travel five miles, a distance that in the countryside is known as a five-minute drive.
There's almost no better metaphor for the problem that cities cause: because so many of us all want to move around at the same time, we all get in each other's way and go nowhere. As popular wisdom puts it, you're not in traffic, you aretraffic.
So, since we are not ants that organize themselves into neat lines for the good of the collective, how do we build a transport system that is fast, clean, quiet, and fair?
One solution is to move traffic upwards, building tech that allows them to layer it vertically. The coolest of these is the "straddling bus" being tested in Changzhou, China. Supported by parallel stilts, it spans two traffic lanes and drives along with cars passing underneath. It can carry 1,400 passengers and, as a treat for the drivers passing beneath, it's underbelly looks like the sky.
Meanwhile, Mexico City, which has the second-worst traffic in the world (after Istanbul) is testing a kind of elevated monorail hung with pod-shaped gondolas. Although they're not quick, they're still twice as fast as the traffic, which travels at an average five miles per hour, about the same as a horse-drawn carriage.
But adding layers only postpones the problem. Who today believes that the way to solve congestion is to build more motorways? What we actually need is less traffic. A double-decker bus that carries 80 passengers takes up as much road space as two or three cars. Assuming everyone's commuting alone, that's a space savings of 96%.
Another way to cut traffic is to copy Sweden (as in so many things). There, deliveries to Gothenburg city center are grouped on the outskirts, so instead of a dozen shops on the same street being supplied by a dozen vans, one lorry supplies them all. And because it's Sweden, the truck is electric.
The other way to do that is to make traffic more efficient. An astonishing amount of it—up to 30%—consists of people driving around trying to find parking spaces. So what Google spin-off Sidewalk Labs is proposing to do in Columbus, Ohio, is use big data analytics and the Internet of Things to direct connected cars to the nearest empty space, whereas in Moscow they're installing empty-space sensors in parking lots.
The other way to reduce traffic is to levy a congestion charge on any cars that come into the city center. In London, which has one of the biggest congestion charge areas in the world, the number of drivers coming into the city has halved since the year 2000. But that can only be partly ascribed to the charge (which is a lot: $15 a day); much of the improvement has come from building alternatives.
And that's the important point: You can't squeeze out cars without giving people another means of getting around. The most obvious recent innovation there has been is the mass adoption of bike-share schemes. In 2004, only 11 cities worldwide had them. Just over a decade later, there are more than a thousand. The biggest, in Hangzhou, China, has 60,000 bikes already and is adding another 100,000 in the next few years. The most sophisticated, in Copenhagen, has a fleet of electric bicycles with weather-resistant GPS tablets.
But the problem everyone's talking about is "the last mile." Essentially, the idea is that even though the underground works well enough if you want to go from, say, Liverpool Street Station to Notting Hill Gate, you don't actually live in a transit hub and don't work in one either. So with walking or—especially as you get farther from the center—having to take a bus to the station, it ends up taking forever.
So the cutting-edge solution is to integrate the traditional public transport system with ride-sharing services like Uber. That's what Sidewalk wants to do in Columbus, and what Pinellas County in Florida has already done. And Finland has just created a journey-planning app, like CityMapper, which has integrated all the payments, so you can get the best route and then pay to travel by bus, train, bicycle, taxi, or rental car.
But ultimately, that last-mile taxi traffic can be made more efficient, too. Robotic taxis are already on the road in Singapore, carrying their passengers around a research park where the traffic is light and the conditions predictable. Google is testing its driverless cars in California, and Japan has pledged to have thousands of robot taxis available for tourists by the 2020 Olympics.
It may still be the technology of the future, but it now seems to be the technology of a very near future indeed. When you consider that 70% of the cost of traveling by taxi is the driver, and that robotic cars would be able to move in perfect time with one another at a high, steady speed, it could end up being transformative for an integrated public-private transport system.
All we need to do is make the robot taxis electric, along with the buses, trains, trucks, and floating gondolas, and our cities will be moving faster, cleaner, and quieter.
Alexander Starritt is the editor of Apolitical.

(Source: http://www.fastcoexist.com/3062404/how-to-build-the-perfect-city/solving-urban-traffic-problems-is-simple-fewer-cars)
Posted by Anonymous at 16:45