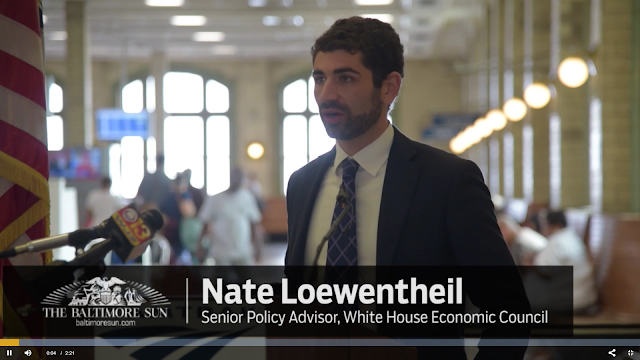 Amtrak wants to pick a developer to renovate Baltimore's Penn Station by summer 2017.

Amtrak officials said Wednesday they plan to pick a developer by this time next year to renovate Baltimore's century-old Penn Station, a project that's been stalled for years.
The quasi-public railway took a step toward tackling the station's countless overdue infrastructure improvements by soliciting qualifications from developers, consultants, engineers and other potential bidders. Rina Cutler, Amtrak's senior director of major stations planning and development, said officials want a vision for the station to come from those who would take on the project.
"Imagine this space as the city's newest living room," Cutler said at a news conference in the station lobby. "That is really what we hope to achieve with this process."
Amtrak expects bidders to bring private equity financing options to the table, though the project could also be paid for with some combination of public and Amtrak money, Cutler said.
No cost estimate was released.
Short-term updates would likely include retail options inside the station, some use of the station's unused 40,000 square feet of upper-floor office space, Americans with Disabilities Act compliance measures and a vision for the station's front plaza, she said. Proposals are expected to include development of other properties near the station. 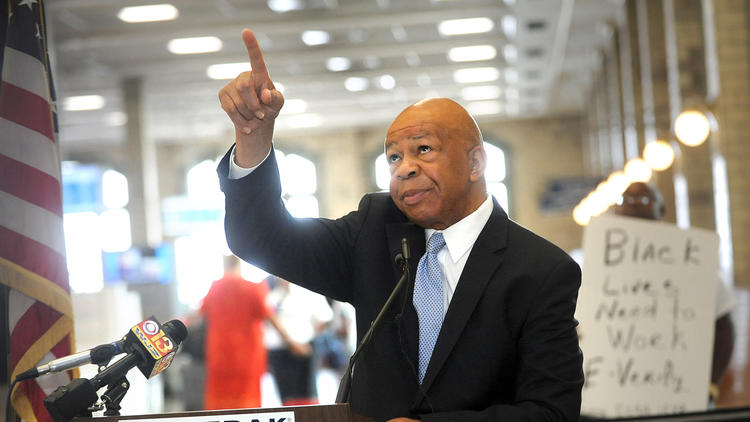 The Honorable Elijah E. Cummings, ranking member, U.S. House of Representatives, points to the ceiling of Penn Station during a press conference by Amtrak in the main hall of Baltimore Penn Station regarding plans to redevelop the station. In the background is Dale Hargrave holding a sign referring to the ICRA (Immigration Control Reform Act of 1986).
(Algerina Perna / Baltimore Sun)

The top three priorities for the station renovation are design, community involvement and financing, Cutler said.
In 2012, Beatty Development, the lead developer of Harbor Point, proposed building up to 1.5 million square feet of residential and commercial space around the station for $500 million. That proposal included conceptual suggestions for station updates. While that plan did not come to fruition, Beatty is among those bidding to provide comprehensive renovations to the station, the company said Wednesday.
After the news conference, Cutler and other Amtrak officials gave an hourlong presentation to the bidders at the University of Baltimore about the railroad's hopes for the project.
Craig Covil, a civil engineer at Arup, a New York firm, said the presentation was "very clear."
"What's really good is it's a very doable timeline," he said.
Jensen Clarke, vice president at Fengate Real Asset Investments, said his firm is interested in helping finance the project with a combination of bank and bond options.
"Although there is some ambiguity in the project's scope, it has tremendous upside if developers are able to capture the real estate opportunity," Clarke said.
Mark E. Strauss, a senior partner at FXFowle, a New York architecture firm, said the station project will have a ripple beyond Baltimore to other East Coast cities.
"It's not just serving Baltimore's interests," Strauss said. "It's the whole Northeast Corridor."
The renovation will spur additional investment in an already up-and-coming area around the station, said Susan Yum, spokeswoman for the Baltimore Development Corp., the city's economic development agency.
"The redevelopment of Penn Station is incredibly important, as it is the first impression of Baltimore to anyone traveling by rail to the city," Yum said. "The station has much more potential as both a transit hub and a key gateway, and we hope that Amtrak will be able to see this project through to completion."
The city and state commissioned a "State of Good Repair" study in 2014, which identified $67 million in needed improvements. Amtrak, the state and city have spent $20 million over the past six years on station upkeep, including a backup generator, restroom maintenance, signage, lighting and other basic improvements.
U.S. Rep. Elijah E. Cummings, who attended the news conference, said much more is needed.
"These improvements have been modest and do not begin to provide the kinds of amenities travelers can find in other stations like Washington's Union Station or even Philadelphia's station," he said.
He called Penn Station "an asset whose tremendous potential has been untapped for far too long."
While the timeline to choose a developer is relatively short, officials have given no hint as to how long construction could take.
A major redevelopment to build offices, hotels and residences over tracks at Washington's Union Station is expected to take 20 years, according to Beverley Swaim-Staley, CEO and president of the Union Station Redevelopment Corp. Four years after being announced, that project is undergoing environmental impact studies required before construction can begin.
Cummings said he looks forward to seeing a renovated station that attracts and accommodates higher passenger demand.
"To transform Penn Station into a facility that provides world-class amenities and supports economic growth throughout Baltimore, Amtrak needs a partner who has the vision to see Penn Station as what it could be and should be, and the skills, resources and commitment necessary to make that vision a reality," he said.
Nate Loewentheil, a senior policy adviser at the White House National Economic Council, hailed the project as a sign of the city's future.
"The Port of Baltimore and the B&O Railroad helped make Baltimore a major commercial hub for the country in the 19th century," he said. "The construction of Penn Station at the start of the 20th century helped cement Baltimore as one of the great cities on the Eastern Seaboard. The redevelopment of the station will help bring us into the 21st century."
cmcampbell@baltsun.com
twitter.com/cmcampbell6