Train ONETU 02 was traveling at a speed of approximately 25 mph at the point of derailment. The speed restriction for this section of track is 30 mph due to the curvature of the track.

The train originated in New Town, North Dakota, and was destined for Tacoma, Washington. The train consisted of two head-end locomotives, one distributed power locomotive at the rear, two buffer cars, and 94 tank cars loaded with Bakken crude oil. The train was operating with conventional air brakes.

The tank cars in train ONETU 02 were general purpose specification DOT-111 tanks cars, modified to the Association of American Railroads (AAR) CPC-1232 standard. The cars were equipped with full-height head shields and metal jackets with insulation. The cars did not have thermal protection. These cars are commonly referred to as “jacketed 1232s.”
During the derailment, a coupler struck one tank car, mechanically puncturing it. This puncture allowed crude oil to come into contact with an ignition source, leading to a fire that burned for approximately 14 hours. Four cars were eventually involved in the fire.

The four tank cars involved in the fire were the punctured car, and three additional tank cars – two that had their bottom outlet valves sheared off in the derailment, and one car with the gasket melted out from under the manway cover.

FRA’s investigation found that multiple lag bolts in this section of Union Pacific track were broken and sheared, leading to tie plates loosening from ties. The loosened tie plates allowed for the rails to be pushed outwards as trains moved across them, eventually resulting in an area of wide gauge, leading to the derailment.

Tank Cars
The tank cars involved in the derailment performed as expected in the incident based on tank car performance metrics.

Braking
The Union Pacific train was equipped with an air brake system and was operating on distributive power.
Following the derailment, FRA’s Office of Research and Development conducted simulations modeling a derailment similar to Train ONETU 02, assuming the consist was equipped with conventional breaks, distributive power or electronically controlled pneumatic (ECP) brakes. (Distributive power provides power to the train from both ends of the consist and provides improved braking over air brakes. ECP brakes use an electronic trainline signal to activate brakes on all cars throughout a train consist simultaneously.)

As has been the case with previous instances of modeling, FRA’s simulation found that applying the brakes uniformly and instantaneously would have provided additional train control, potentially shortening the stopping distance, and leading to a less severe derailment.

In this specific model, the simulation found that if Train ONETU 02 had been equipped with ECP brakes, two fewer tank cars may have derailed, and one less tank car may have been punctured.

ConclusionUnless or until additional details come to light, FRA has made the preliminary determination that Union Pacific’s failure to maintain its track and track equipment resulted in the derailment. Broken and sheared lag bolts, while difficult to detect by high-rail, are more detectable by walking inspection combined with indications of movement in the rail or track structure and/or uneven rail wear, and are critically important to resolve quickly.

FRA Actions Since Derailment
Following the derailment, FRA took the following actions to inspect and ensure safety along this route:

● FRA conducted walking inspections of all the curves in the Columbia River Gorge to inspect for additional track, fastener, or bolt issues.
● FRA conducted similar inspections of BNSF track on the Washington side of the Columbia River.
● FRA conducted a data search of FRA databases for tie fastener trends across the rail industry.
● Volpe, one of the Department of Transportation’s research centers, is testing the metallurgy of the broken bolts.
● Ran a geometry car with a Gage Restraint Measurement System on Union Pacific track to rule out wide gauge on Union Pacific’s Portland, Ayer, and Spokane subdivisions.
● Confirmed that nine Union Pacific temporary speed restrictions remain in place along Union Pacific’s Portland Subdivision, including a 10 mph speed restriction in Mosier.
● FRA is evaluating potential enforcement actions, including violations, and other actions to ensure Union Pacific’s compliance with applicable safety regulations. 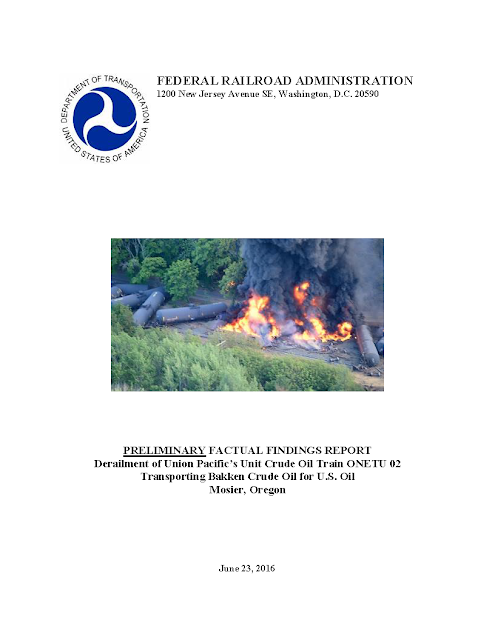