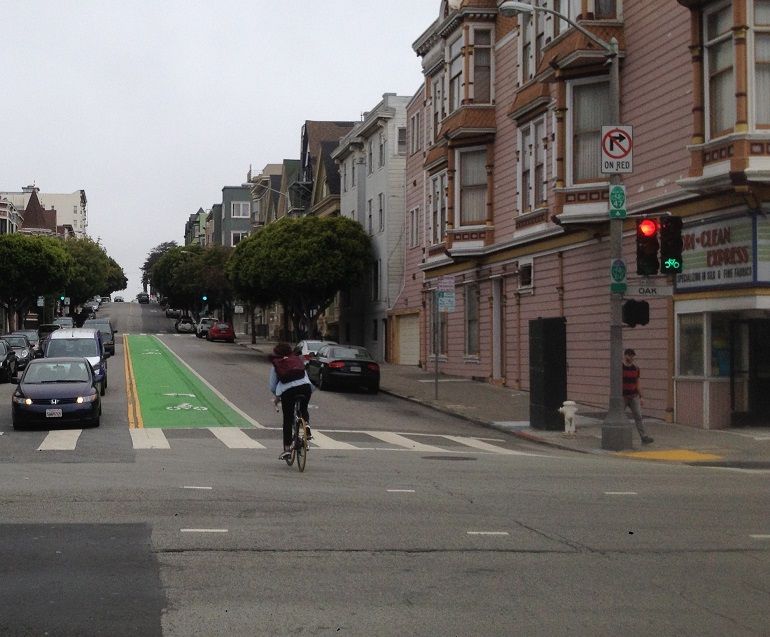 Thanks to a new bicycle traffic signal installed at Scott and Oak streets this week, bike commuters on the Wiggle get a head start across the intersection.
The new northbound signal gives people on bikes an edge on safety similar to that people walking already had with a “Leading Pedestrian Interval.” With a “Leading Bike Interval,” everyone can now stroll and pedal across Oak several seconds before drivers get a green light.
For people biking northbound, this signal makes it easier to make the merge from the right-side bike lane (south of the intersection) to the left-turn bike lane (north of the intersection) to follow the Wiggle onto Fell Street.
(The Wiggle, by the way, is a popular bike route through the Lower Haight -- the flattest route through that area of the city.)
This bike signal is one of the near-term improvements we’re making as part of the Wiggle Neighborhood Green Corridor Project, which is aimed at making streets on the route calmer and safer for walking and biking.
Ahead of the larger Wiggle safety improvements expected to start construction this fall, we’re making other near-term upgrades such as painted safety zones at corners. We’ve also widened and added green paint to the bike lane on Scott, where the new bike signal is.
The bike signal is a complement to the existing bike box, which provides a place for bicycle riders at a red light to position themselves in front of stopped vehicles. From there, when the light turns green, people on bikes can cross Oak and move into the left-turn bike lane ahead of people driving. (Worth noting: The bike box will also be expanded to provide more room for rush-hour crowds.)
The bike signal allows people to bike across Oak while only pedestrians cross in the same direction. Essentially, it formalizes the intuitive “head start” that people on bikes were already taking - crossing during the Leading Pedestrian Interval - to make the merge easily and comfortably.
That function is a bit different from those of most bike signals around the city, which are usually installed to allow bike traffic to cross during a signal phase when they won’t cross paths with other traffic. Others are installed at spots where only bikes can enter, like the new signal that leads into Golden Gate Park at 7th Avenue and Lincoln Way.
Scott and Oak is the fifth intersection to get a bike signal along the Wiggle and the Panhandle bike path. One lies just a block to the north, where the left-turn bike lane on Scott meets Fell, and another is at Fell and Masonic Avenue (on the Panhandle).
As we gear up for the Wiggle’s transformation, keep an eye out for more signals of its shift toward a more livable, bike-friendly place.