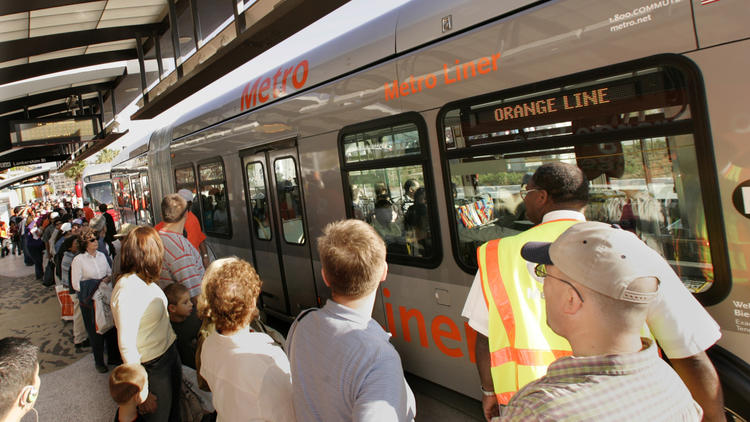 The Orange Metro Line at Lankershim and Chandler in North Hollywood on its opening day on Oct. 29, 2005. (Los Angeles Times) Los Angeles is a city that has fallen in love with rail. The opening of the Expo Line to the beach has captured the city’s imagination ahead of a proposed November sales tax measure that will bring in $120 billion over 40 years for transportation projects.  Amidst this ongoing love affair, Metro has set aside $1.4 billion in the measure to turn the Orange Line from rapid busway to light rail.
To many, particularly in the San Fernando Valley, this planned conversion is cause for celebration. In a city poised to shimmer with fancy new rail, a rapid busway appears to be rather meager by comparison. The reality, however, is that the Orange Line is a national success story. Despite its lack of sex appeal, the line is by far Metro’s most cost-effective transit way per passenger mile traveled — an attribute crucial for a county looking to expand rapid transit at a pace faster than it has money to do so. Cost-effective bus service, which works far better than rail for medium-density, low-rise neighborhoods (like much of the San Fernando Valley) will be a key component of our transit network long into the future.
That’s not to say the Orange Line doesn’t have its problems. The line can be slow, it can be crowded during peak hours, and passenger capacity is limited. The Institute for Transportation and Development Policy, which grades bus rapid-transit lines around the world, ranks the Orange Line 60th out of the 106 BRT routes it assesses — putting it behind lines in Brazil, China, Colombia, France, Mexico, Cleveland and even San Bernardino. The Orange Line loses points because it isn’t integrated with other bus rapid-transit routes and fails to offer varied service types, such as express buses that skip stops.
That said, under the proposed sales tax, $1.4 billion in funding to convert the Warner Center to North Hollywood segment of the line to light rail won’t become available until the 2050s. In the meantime, there are quick and cost-effective steps that we can take to improve the Orange Line busway today — steps that could render its eventual conversion to rail unnecessary.
The most urgent improvement is to speed up travel time by reducing waits at signalized intersections. The Orange Line covers 18 miles in about 56 minutes at an average speed on par with the Expo Line light rail. Calls to speed up the Expo line by reducing waits at signalized intersections shouldn’t be exclusive to rail. Granting Orange Line buses priority at traffic signals allows Metro to increase the frequency of service, relieve crowding and increase the volume of passengers that can be served daily.
The barriers to transit signal priority are now entirely political, as the state has eliminated environmental review procedures that ignored transit passengers.  Our politicians simply have to decide to shave travel times for thousands of daily mass transit passengers by adding some wait time to vehicles at crossings.
See the most-read stories this hour >>
Steps also need to be taken to integrate the Orange Line with other bus routes. Important regional connections are already in the works. A proposed $266-million investment will create a bus rapid-transit route between the Orange Line’s North Hollywood terminus and the Gold Line in Pasadena by 2022. A proposed $260-million busway utilizing new 405 Express Lanes through the Sepulveda Pass would open by 2026. And a further $286 million in proposed improvements to the Orange Line bus between 2019 to 2025 could fund grade separation, vehicle automation and higher capacity stations.  The combination of new busway routes and Orange Line improvements could allow Metro to offer express service from Warner Center or Pasadena to the Westside.
Because the Orange Line right-of-way is built for bus and not rail, it can accommodate services that operate on surface streets as well as the rapid busway. This flexibility enables Metro to offer point-to-point buses from Cal State Northridge to UCLA or from Burbank airport to LAX.
Of course, making these ideas happen requires flexibility in planning — something that isn’t easy to come by in the highly politicized space of L.A. transit. The idea of converting the Orange Line to rail is almost entirely a product of the political process required to win a two-thirds vote from the public to pass the sales tax measure.
That process begins when 88 L.A. County cities send their transportation project wish lists to nine subregional councils of governments, which then submit project lists to Metro. The result of this ballet is that projects that connect multiple subregions tend not to garner as much local political support as projects that exist entirely within a city or subregion. As a consequence, our grand transportation plans tend to reflect the politics of mobility instead of the reality of the region’s needs.
Making the Orange Line all it can be, indeed making all transit projects in L.A. County all they can be, will require a more comprehensive, cooperative and interjurisdictional approach to meeting the region’s mobility needs.
Though we can’t fully predict what the future will mean for transportation in Los Angeles, we do know that the most populated county in the country will always need dedicated rights of way served by large-capacity vehicles that can move at least 10,000  people per hour through a space as wide as a traffic lane. If it turns out 35 years from now that rail is the best choice for the Orange Line and Los Angeles, we should proceed full throttle.
Ultimately, however, that decision should be based on sensible planning, not false perception or politics.
Juan Matute is associate director of the UCLA Institute of Transportation Studies
(Source: http://www.latimes.com/opinion/livable-city/la-ol-orange-line-r2--20160718-snap-story.html)
Posted by Anonymous at 11:38