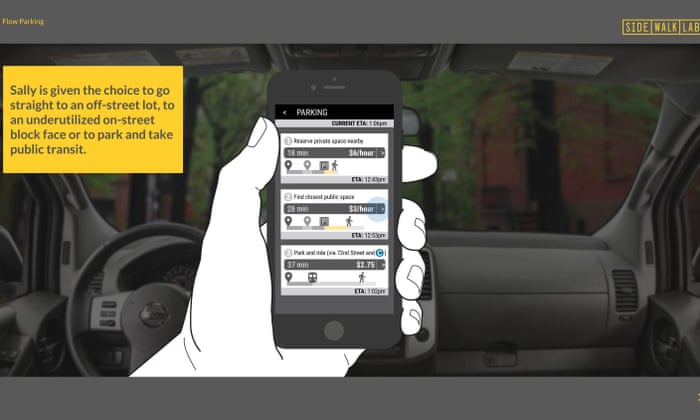 
Sidewalk Labs, a secretive subsidiary of Alphabet, wants to radically overhaul public parking and transportation in American cities, emails and documents obtained by the Guardian reveal.
Its high-tech services, which it calls “new superpowers to extend access and mobility”, could make it easier to drive and park in cities and create hybrid public/private transit options that rely heavily on ride-share services such as Uber. But they might also gut traditional bus services and require cities to invest heavily in Google’s own technologies, experts fear.
Sidewalk is initially offering its cloud software, called Flow, to Columbus, Ohio, the winner of a recent $50m Smart City Challenge organized by the US Department of Transportation.
Using public records laws, the Guardian obtained dozens of emails and documents submitted to Challenge cities by Sidewalk Labs, detailing many technologies and proposals that have not previously been made public.
Some will be controversial, including spending transport subsidies for low-income residents on ride-sharing services such as Uber, requiring cities to upgrade to Sidewalk’s mobile payments system, and modernizing public parking to boost city revenues.
Sidewalk Labs was spun out from Google last June with a mission to “improve city life for everyone”. Since then, it was part of a consortium that deployed several hundred free Wi-Fi kiosks in New York and is rumoured to be designing a city from the ground up for self-driving cars. Now, it’s offering Columbus a three-year demonstration project consisting of 100 Wi-Fi kiosks and free access to Flow.
“When governments and technologists collaborate, there is an enormous potential to reimagine the way we approach urban mobility,” said Anand Babu, COO of Sidewalk Labs, in a statement to The Guardian.
The emails and documents show that Flow applies Google’s expertise in mapping, machine learning and big data to thorny urban problems such as public parking.Numerous studies have found that 30% of traffic in cities is due to drivers seeking parking.
Sidewalk said in documents that Flow would use camera-equipped vehicles, like Google’s Street View cars, to count all the public parking spaces in a city and read roadside parking signs. It would then combine data from drivers using Google Maps with live information from city parking meters to estimate which spaces were still free. Arriving drivers would be directed to empty spots. 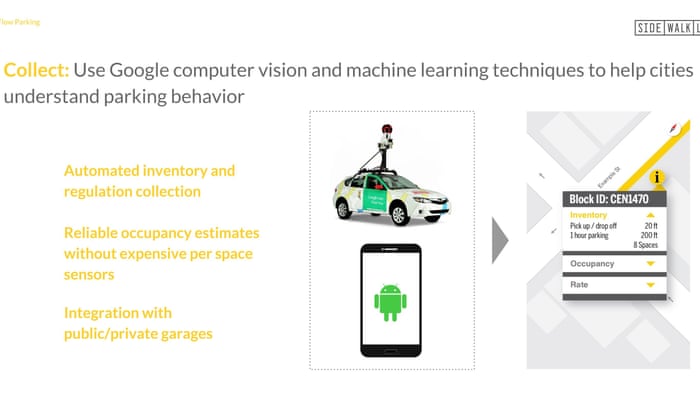 Flow would use data obtained from camera-equipped vehicles about parking availability with live information from city parking meters to estimate where spaces are available. Photograph: Sidewalk Labs
“Only Google or Apple are in a position to track parking occupancy this way, without expensive sensors on poles or embedded in the tarmac,” says Alexei Pozdnoukhov, director of the Smart Cities Research Center at the University of California at Berkeley.
Flow would also vary the cost of parking spaces according to demand. On weekends, prices might drop in business areas while they climb near music venues. Sidewalk claims this would increase income from parking by 10%.Sidewalk also hopes to persuade private parking garages to add their spaces to Flow’s database, and even proposes something called “virtualised parking”. A bit like Airbnb for cars, this would allow retailers and offices to temporarily rent private parking spaces usually reserved for shoppers and workers. “This module will be your public relations winner,” Sidewalk claimed in a marketing document. It estimates each virtualised space will be worth $2,000 a year to the city.
However, Pozdnoukhov says that variable pricing is far from proven. “It could mean real congestion relief across cities ... but a pilot project in San Francisco was not very well received,” he says. “If Sidewalk can show value to drivers, it could be a different game, but that’s easier said than done.”
Flow packs sticks as well as carrots. An “optimised parking enforcement” module would use AI algorithms to calculate the most lucrative routes for parking cops, earning a medium-sized city another $4m in fines.
Sidewalk also wants to redefine public transport. Flow Transit would integrate information and payment for almost every form of transport into Google Maps. Choose a destination and the app will estimate a journey price and duration using everything from buses and taxis to Uber, Lyft, car-share services like Zipcar and even bike-shares. 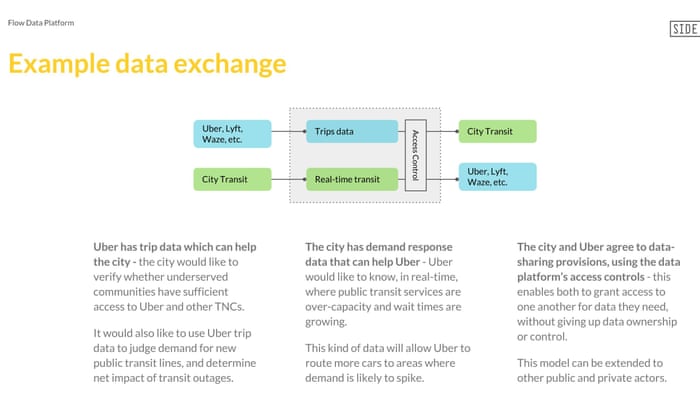 Flow would integrate information and payment for almost every form of transport. Photograph: Sidewalk Labs
“This idea makes sense in general,” says Carlo Ratti, director of the Senseable City Lab at MIT. “It is important however, that such a platform be open to multiple players.” While Sidewalk did not rule out other partners, its documents focused on Google apps. One said, “During the demo period, the [city’s] data platform includes… data exchange with one party - starting with Google.”
For the demo, Sidewalk wants 90,000 low-income transit users, who might currently be given discounted or free bus passes, to be able to spend those subsidies on ride-share services instead.
Pozdnoukhnov worries that this would threaten traditional bus services: “The problem is that this money will end up with Uber rather than the transit agencies, undermining their existence. The only public systems that will survive will be light rail and subways.”
Columbus would receive 1% of the revenue from the app, earning about $2.25m annually according to Sidewalk. Sidewalk did not disclose its cut. Google owns about 5% of Uber.
For Flow to work, Sidewalk has to seamlessly charge and pay many different users and vendors. Sidewalk’s memorandum of understanding (MOU) contract, seen by the Guardian, requires that cities distribute transit subsidies through Sidewalk, and accept the company’s mobile payments for all existing transit and parking services.
Cities like Columbus would be obliged to bring parking signs up to date, re-train enforcement officers and share parking and ridership information with Sidewalk in real time. The company also wants cities to share public transport data with ride-sharing companies, allowing Uber to direct cars to overcrowded bus stops.
All these conditions could mean expensive upgrades to existing technology. “Not every city would be ready to do that,” says Pozdnoukhnov. “Plus, you’ve got a variety of transit operators. Small ones might have to change their entire payment systems.”
The contract glosses over likely political resistance to Google transforming and managing city services. “During the demo period,” it reads, “the City will be responsible for … clearing policy hurdles in order to make implementations possible.” For instance, Sidewalk requires cities signing it to establish policies allowing minimum parking requirements to be reduced for developers or businesses contributing to the transit fund. Demand-based pricing for parking could also require legislative action.
If Columbus signs up, Sidewalk wants to start swapping data with the city by August, implement dynamic parking by January and launch its shared mobility marketplace by next July.
Columbus now has to decide whether it wants all or any of Sidewalk’s services. “The Flow system is definitely something we see real value in,” says Rory McGuiness of the city of Columbus. “But we have not [yet] signed any agreements with them.”


(Source: https://www.theguardian.com/technology/2016/jun/27/google-flow-sidewalk-labs-columbus-ohio-parking-transit)
Posted by Anonymous at 00:28