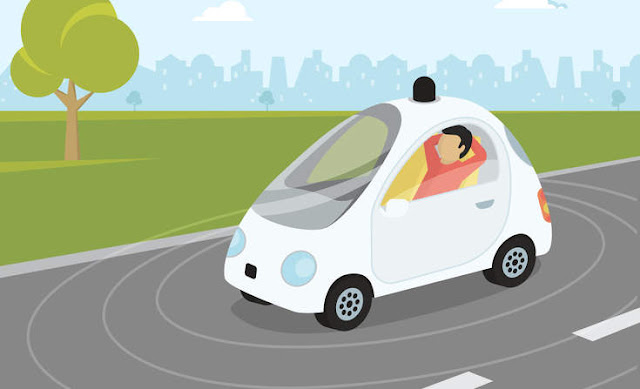 
With the confirmation last week that a Tesla Model S that crashed into a passing truck in May, killing the Model S passenger, was operating on autopilot — the first fatal crash involving autonomous driving technology — policymakers around the world may be reflecting on the downsides of driverless cars.
The technical side of complete autonomy is likely on the way in the next decade or so, with some arguing it is almost at our doorstep.
Still, the technology in the Tesla car was by no means fully autonomous. The company calls it a "driver assistance system," and legally it does not absolve the driver from keeping his attention on the road.
However, while there has been much focus on developing these cars and ensuring their safety, the ways in which autonomous transport will be used to reduce emissions is still little understood.
There are indeed multiple ways driverless cars likely will shave energy use, and thus emissions. The possibility of route optimization and more fuel-efficient acceleration and braking are just a few of the potential advantages. A car capable of finding an electric charging point by itself could boost the practicality of electric cars.
Meanwhile, autonomous cars also connected to each other via smart technology would offer chances for traffic flow optimization, while the increased safety hoped for by the elimination of human error could lead to relaxed regulations which allow lighter cars to be made.

The biggest advantage [public transport] has now is productivity — we can get things done in a train. But ... when cars will start affording us the same opportunity, then there's a potential that people may switch to cars.

Autonomus cars also offer the possibility of radical new ownership models, with many experts even predicting a wide-scale shift to shared ownership models, which would mean fewer cars are needed overall. This could, in turn, lead to "rightsizing," where users change the particular car used depending on their journey that day — someone who needs a hatchback a few times a year for family trips simply could order one when needed and use a one-person mini-car for the daily commute.
Meanwhile, on the cost side, the price of taxis also could drop substantially as the driver wage is taken out of the equation, while self-driving lorries could offer attractive cost savings for freight-reliant businesses.
However, as well as the obvious employment issues these new models would have on those who drive for a living, some argue that there could also be an environmental downside to the increased flexibility of fully self-driving cars.
Zia Wadud, associate professor at the Institute for Transport Studies at the University of Leeds, warns the benefits of autonomous vehicles potentially even could lead to a rise in car use at the expense of lower carbon public transport.
"We know that if people are more comfortable in transport, the more they tend to switch their mode," he told BusinessGreen. "The biggest advantage [public transport] has now is productivity — we can get things done in a train. But ... when cars will start affording us the same opportunity, then there's a potential that people may switch to cars from even rail. We have to be aware of that."

In a world of zero-emission cars and perfectly optimized traffic flow, increased car use might seem more acceptable, but the reality of future roads may look a lot different.
There is no guarantee that all future self-driving cars will be electric, nor that all electricity will be decarbonized in the future, nor even that the production of cars and overseas delivery of vehicles will be zero emission.
Meanwhile, low-carbon optimization could compete directly with other attractive features of automatic cars. One example of this, given by Sevvy Palmer, head of cyber at the Centre for Connected and Autonomous Vehicles, to business leaders at LowCVP's annual conference in London last week, is that driving mechanisms which are optimized to priorities road capacity could mean a jerkier, less comfortable experience for the occupant.
All this leads to the question of whether policies should be put in place to ensure automation of cars goes hand in hand with rollout of lower emission vehicles.
"The two technologies are completely separate and are not contingent on one another," said Palmer. "The main thing I would say about the environmental impacts of connected and autonomous vehicles is to not let it be a distraction from the extremely important work we need to do on low-carbon vehicle powertrain technologies. That is not a market that's going to happen on its own without continued government support."
Policies could be developed to strengthen the link between autonomous and electric or hydrogen fuel cells vehicles to boost the appeal of low carbon vehicles to normal users. Limits could be put on autonomy, with its focus angled more at boosting the connectivity of cars both to each other and to infrastructure, to increase traffic flow optimization.
In the end, said Wadud, the uncertainty in all of this is what needs to be highlighted. The energy and carbon benefits of automation and connectivity are potentially large, but not guaranteed by any means, and planning and coordination of stakeholders need to be aligned so that individual mechanisms are aligned in the same direction.
"If we can guide the development of the transport system to the mobility on demand, and mobility as a service space, combined with right sizing and energy efficiency improvements — that could potentially reduce energy consumption and carbon emissions substantially," he told the LowCVP conference delegates. "But all of these things have to come together in order to get the full benefits of automation."

This story first appeared on:
BusinessGreen