Count me in as a general well-wisher for bus rapid transit, or BRT.  If done right, in dedicated lanes with multiple boarding openings and signal priority, it can mimic much of the benefits of rail (speed and reliability) at a fraction of the cost and time to build.

Many environmentalists and transit advocates agree, which is why more and more BRT lines are being introduced around the country, from Cleveland to San Francisco.  Los Angeles has one of the first in the country in the San Fernando Valley (see the photo below — I document the history of the line in my book Railtown, as the one exception to my otherwise-exclusive focus on rail transit history). 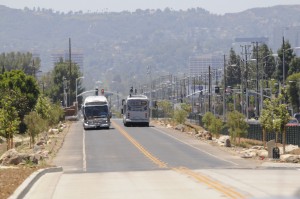 But now Benjamin Ross, a transit advocate in Maryland, offers a surprising account of the history of bus rapid transit, with evidence that it originally sprang as an idea by the oil and gas industry and highway lobby to blunt momentum for rail transit.

While he acknowledges that buses are important and that BRT, when done right, can be successful, he ultimately believes that the push for BRT has in too many cases undercut momentum for much more effective rail transit systems.  He also decries the “watered down” versions of BRT that lose many of the critical distinctions that make it a speedy and effective mode of moving people.

The account is hardly a paranoid polemic and seems well-balanced.  For my part, I think context is everything.  There is a reason that BRT has taken hold well beyond the anti-rail, pro-highway forces.  Its low price tag, speed of construction, and quality of service are hard to beat and offer the perfect technology for certain corridors and mid-size neighborhoods.  For places like Los Angeles, it would be easy to add bus-only lanes to existing highways, and that shouldn’t detract from the push for rail in high-density parts of the region.
But it’s worth considering Ross’s point that BRT advocacy can sometimes go too far and undercut the case for more right-sized transit like rail.  His point about decision makers watering down BRT too much is also well taken — it’s not truly BRT without a dedicated lane and signal priority, at the very least.

Meanwhile, transit advocates should keep this mixed history in mind, in order to guard against efforts to divide them or to lower the quality of transit in the ongoing mobility battles in cities across the country and beyond.


(Source: http://www.ethanelkind.com/the-surprisingly-sordid-history-of-bus-rapid-transit/)
Posted by Anonymous at 03:42