Curbed LA: Can self-driving technology save the bus?

Does autonomous, hyper-customized semi-public transportation spell an end to buses? It doesn’t have to

The bus is doomed. Or so says a New York City study that showed ridership in the most transit-friendly city in the U.S. has plummeted. It’s a trend that’s being witnessed in cities all across the country. As we stand on the brink of a transportation revolution where cars will be driven by robots, buses are being left behind, seen as slow and unpredictable. But pairing the bus with self-driving tech might be a way to save it.
There has long been a call for the transportation industry to prioritize autonomous buses over autonomous cars, or at least for the development of buses to take priority over single-passenger vehicles. This makes a lot of sense, just from a mathematical perspective: an autonomous bus can carry more people and takes up less space on streets. A new kind of shared, driverless bus would also mean a more accessible transportation solution for a larger part of the population.
Prototypes of driverless buses—which are really more like electric shuttles—are already on the streets in several countries, with a few pilot programs, like Local Motors’ 3D-printed Olli, coming to the US later this year. Mercedes recently tested its highly anticipated new semi-autonomous bus on the streets of Amsterdam, traveling a 12-mile route alongside regular human-navigated traffic. And a self-driving bus is also a key component of Elon Musk’s new Tesla plan, revealed last week to much fanfare. 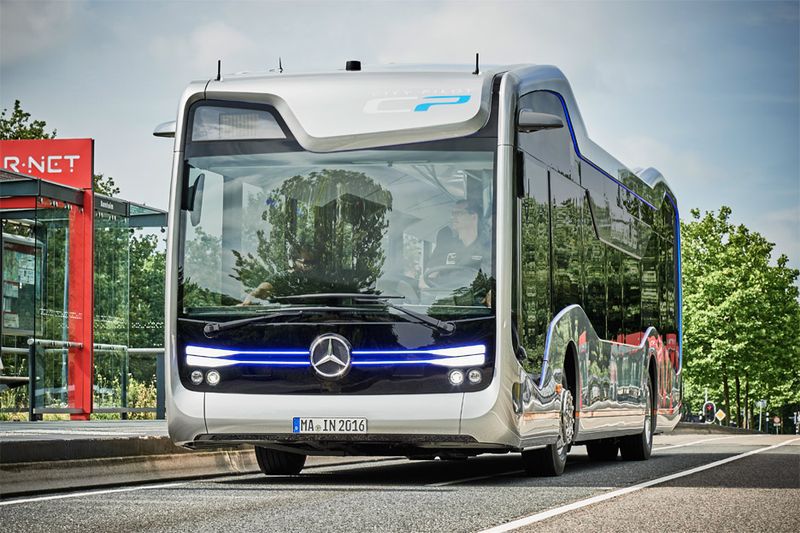 Mercedes’ driverless "Future Bus" hit the streets last week (the driver is just there in case something goes wrong).  Courtesy Mercedes.
Autonomous buses are being touted as safer, smoother, and more energy-efficient. And if all the buses in a city are autonomous—meaning they’re connected to each other like a giant urban transit brain—that could mean more reliable service, like being able to assess ridership trends in real time and deploy extra buses during a particularly busy rush hour.
Those are good benefits, for sure, but there’s one feature that autonomous buses aren’t testing publicly yet that’s poised to radically change the way we think about transit: The evolution from the fixed-route bus to one with a more flexible route that can change to accommodate passenger pick-ups and drop-offs. This shared, door-to-door ride is a lot like the existing carpooling features of UberPOOL and LyftLine: You have a bus that can grab a handful of other people along the way and drop you all at your destinations in due time. Basically, a bus that comes to you.
It sounds good in theory: An autonomous bus would mean more passengers in shared vehicles, fewer cars on the streets, right? But this is actually an area of controversy for planners.
Transit writer Steve Hymon sums up the debate well at The Source: "The big issue here is whether you believe that fixed-route transit—which has been the norm for many decades now—is an anachronism doomed by emerging technologies, or whether you think that fixed-route buses have stuck around this long because they actually work."

Some transit planners want buses to stay the course. Jarrett Walker has written about increasing bus ridership and he makes a good case for why moving away from fixed routes is a bad idea. Namely because adding more vehicle trips is not a good use of urban space in dense cities, he says. "These cities need to organize themselves around frequent transit corridors, where big-vehicle frequent transit, bus or rail, can prosper, allowing the city to grow dense without growing vehicle trips."
There’s a far sunnier outlook presented in a fascinating simulation by the International Transport Forum (ITF), which looked at Lisbon traffic to understand how a city might fare with only self-driving buses. In this scenario, existing buses as well as private cars are replaced with two types of self-driving vehicles: shared-taxis (eight passengers) and taxi-buses (16 passengers).
By nearly every metric, the self-driving buses improved on the current condition: emissions were down, congestion was down, and the city needed fewer overall vehicles. Not only that, but the experience was better for riders, who didn’t have to wait or make transfers, meaning they could spend more time working or with their families.
But the only way this works is if every vehicle on the road is part of the network, and that’s the problem, writes David Roberts at Vox. "The transition, getting from private vehicles to shared vehicles, is the most difficult part. ITF notes that the real benefits of sharing don’t really kick in until the private vehicle fleet has shrunk by at least 60 percent. How would such a system get started?" 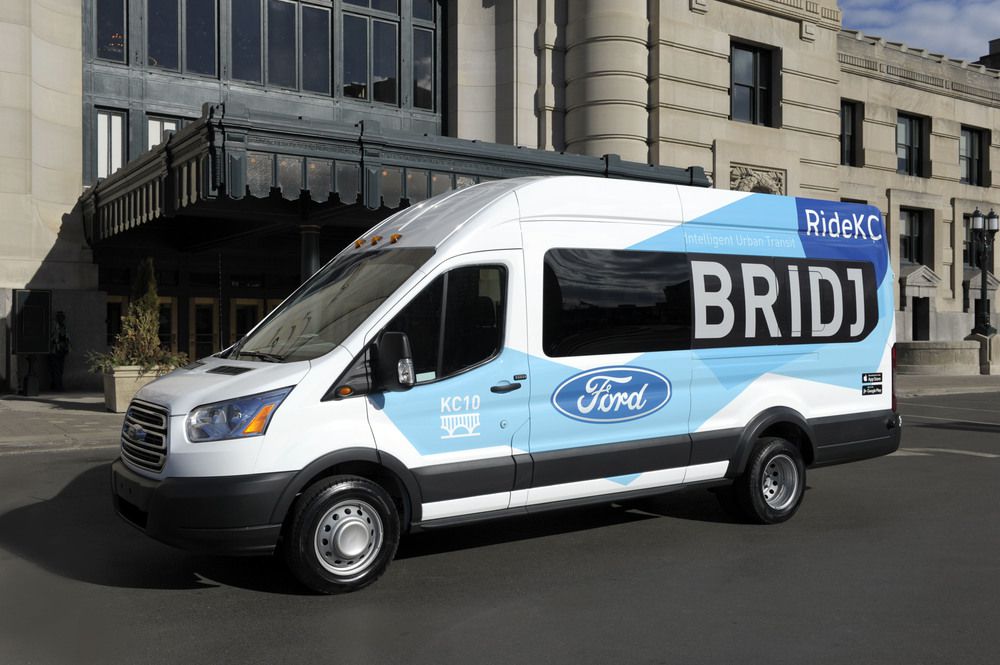 In Kansas City, Bridj directs riders to "pop-up" shuttle stops where they can board its 14-passenger Ford vans.  Courtesy Bridj
One idea might be to get people used to this type of transit before it becomes autonomous. Bridj is a "pop-up transit" or "microtransit" system that serves commuters in Boston, D.C., Kansas City, and is launching soon in Austin. Passengers summon a Bridj bus via app, which uses an algorithm to calculate the best route. It’s not door-to-door, so passengers may have to walk a bit to get to a predetermined stop, making it more like a fixed-route bus that slightly alters its route each day.
The key to avoiding increasing overall vehicle trips might be in Bridj’s pricing structure, which it claims is "slightly more than public transit, but significantly less than taking a taxi"—or, somewhere between the bus and Uber. You could argue that this might create a separate, semi-private transit system just for those who can afford it, but in our short history of tech-enabled ridesharing, it doesn’t seem that people using shared rides are giving up fixed-route transit entirely.
A study by the American Public Transportation Association from earlier this year showed that promoting "shared mobility" was actually a smart way for cities to boost bus ridership: The people who use ridesharing apps the most are more likely to use transit as well. Autonomous buses could be launched to help solve the first-mile/last-mile conundrum, which isn’t too different from the way that many transit agencies have partnerships with apps like Uber and Lyft already.

Autonomous buses are also an ideal solution for places that are far too spread out for a fixed-route transit system to be effective, or for people who can’t drive, like members of our quickly aging population. This is actually the plan for the first federally funded autonomous bus program as part of Columbus, Ohio’s Smart City Challenge proposal, which will collect riders from transit-underserved neighborhoods to help them get to medical appointments.
But at the same time, fixed-route buses in the U.S. need to improve, too. Cities all over the world have seen great success from converting busy routes to bus rapid transit that looks and acts much more like trains, at a fraction of the cost of streetcars and light rail. And there’s very good evidence that even slight improvements in service get more people onboard. Look at Houston, for example, where simply increasing frequency ended up increasing ridership—without really any other changes to the system. 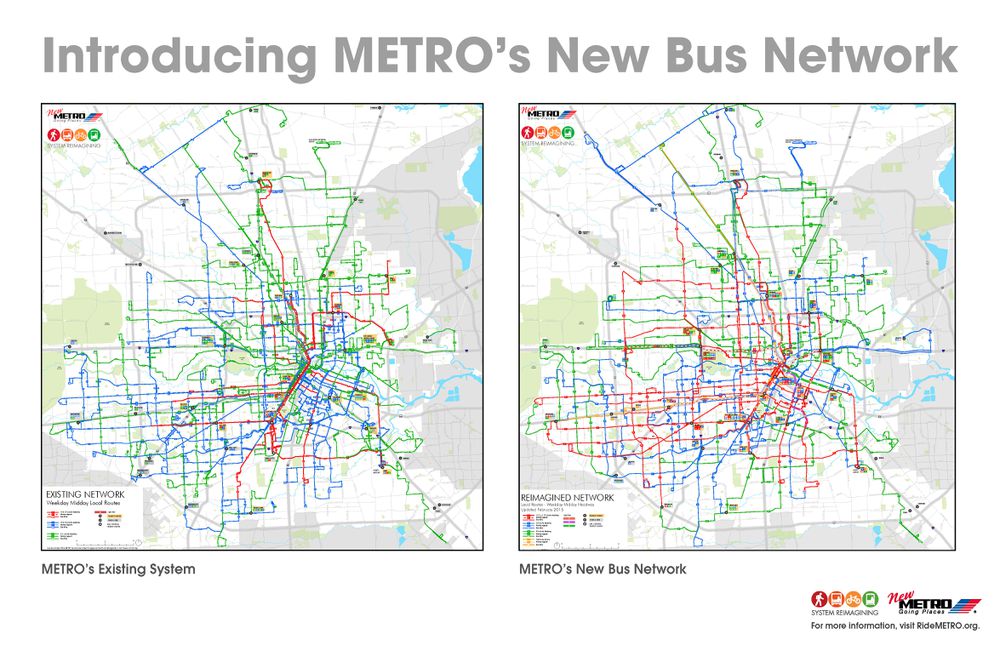 Houston added 20 additional high-frequency routes where buses arrive every 15 minutes or less, seven days a week.  METROBus
The timing for improvements like these is important because cities need to push the use of their existing transit in partnerships with these coming-soon shuttles, vans, jitneys, taxi-buses, mini-buses—whatever you want to call them—right now. Getting people to leave their cars at home needs to be the overall goal here, because cars—specifically, parked cars—are taking up too much space in our cities. Reducing car ownership is the best possible strategy, from a vehicular congestion angle, land-use perspective, and an environmental standpoint. And to do that, people need options that work for them.
Most importantly, though, is getting this kind of shared, smart bus service right first, before self-driving cars hit the market. A good experience may very well convince people who are bullish on autonomous technology that they don’t need to purchase their own self-driving car at all.