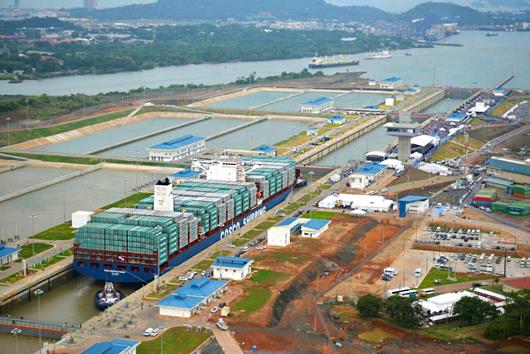 
The expanded Panama Canal has officially opened following its inauguration on June 26.
The inauguration transit of the expanded waterway, which was initially set to be finished by the end of 2014, began with the passage of Neopanamax vessel COSCO Shipping Panama through the Agua Clara Locks on the Atlantic side of the country.
The transit concluded with the vessel’s journey through the Cocoli Locks on the Pacific side and the ship is now en route to Asia.
The US$5.25bn expansion project, which began in 2007, included the construction of a new set of locks on the Atlantic and Pacific sides of the waterway, and the excavation of more than 150m cubic meters of material.
This created a second lane of traffic and doubled the cargo capacity of the waterway.
According to a statement by the Panama Canal Authority (ACP), the expansion locks, which are 70 ft wider and 18 ft deeper than those in the original canal, use less water due to water-savings basins recycling 60% of the water used per transit.
According to the ACP’s administrator and CEO Jorge L. Quijano, at its opening the expanded canal had 170 reservations for Neopanamax ships, commitments of two new liner services, and a reservation for the first liquefied natural gas (LNG) vessel.
Panama’s President Juan Carlos Varela said in a statement: “Canal users can be assured that we’ll continue to support the Panama Canal Authority and our port operators to provide them a world class service and strengthen our logistics system by creating the necessary incentives and conditions to give added value to our inter-oceanic route.”
The expansion project, which according to the ACP was “considered and analysed with more than 100 studies”, is expected to introduce new routes and liner services, as well as new segments such as LNG.
Prior to the expanded canal’s official opening, organisations including insurance company Allianz questioned whether the Panama Canal’s plan to replace “mules” with tugs was safe.
Andrew Kinsey, a senior marine risk consultant at Allianz, argued in a report that just using tugs in the lock chamber means that there is the potential for increased contact with the lock walls.
He continued: “It is believed that the use of tugs, rather than mules, provides sufficient control over ships in the lock chamber, but it is a situation that will be monitored closely.”
The International Transport Workers Federation also expressed concerns over the increased use of tugs. However, the ACP assured the public that the process is safe.
The ACP’s estimates of the number of tugs needed has varied, with the plan comprising five tugs including one to work in front of the ship, two behind it and two on the sides assisting.
Prior to the expanded canal’s opening, the only tugboats used were the two on the sides, with locomotives being used to position the ship in the chamber.