Problem, research strategy, and findings: The practice of horizontal high-volume hydraulic fracturing (fracking) has become widespread in many areas of the United States, yet the regulatory landscape for local governments is highly variable and legally uncertain. We do not have a clear idea of what fracking-related policies local governments are adopting, nor how factors such as local government capacity influence policy adoption. We survey 140 local government officials in shale gas drilling areas in four states: Colorado, Louisiana, North Dakota, and Pennsylvania. We first identify the most common policies local governments use to address fracking and investigate the influence of different types of local capacity on adoption of policies to address fracking. We find that although most communities have not adopted many fracking regulations, higher-capacity communities and those who have experienced a fracking-related accident are more likely to adopt stricter regulations. Local officials are concerned that they lack capacity to address fracking. Our survey asks whether a respondent community did not adopt a policy for legal reasons or other reasons, but did not delve into what those other reasons for non-adoption might be. Our response rate for Louisiana was very low.
Takeaway for practice: Local governments appear to have at least some legal room to adopt fracking policy, yet most have not done so proactively. Investing in capacity building in the form of technical assistance or training for local officials would help communities decide how they wish to address fracking from a policy standpoint without waiting for the catalyst of a fracking-related industrial accident. 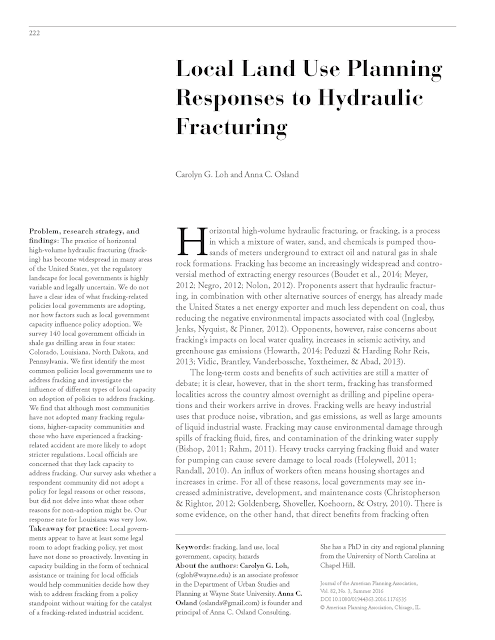