SFMTA/Street Talk: Vision Zero in 2015: Why Safer Streets Are More Important Than Ever

Tom Maguire
With Vision Zero, we are saying one thing: traffic deaths are not just preventable – they’re unacceptable. That was the policy the Mayor and Board of Supervisors unanimously adopted in 2014 and is aimed at eliminating traffic deaths in San Francisco by 2024.
Over the past two years, we’ve spearheaded engineering, enforcement and education efforts to get us on the path to ending traffic fatalities.
To take stock of our recent efforts, today we released the city’s State of Vision Zero 2015 Report. It's a look back at what we’ve achieved in the past year, where we still need to improve and the outlook for the road ahead. 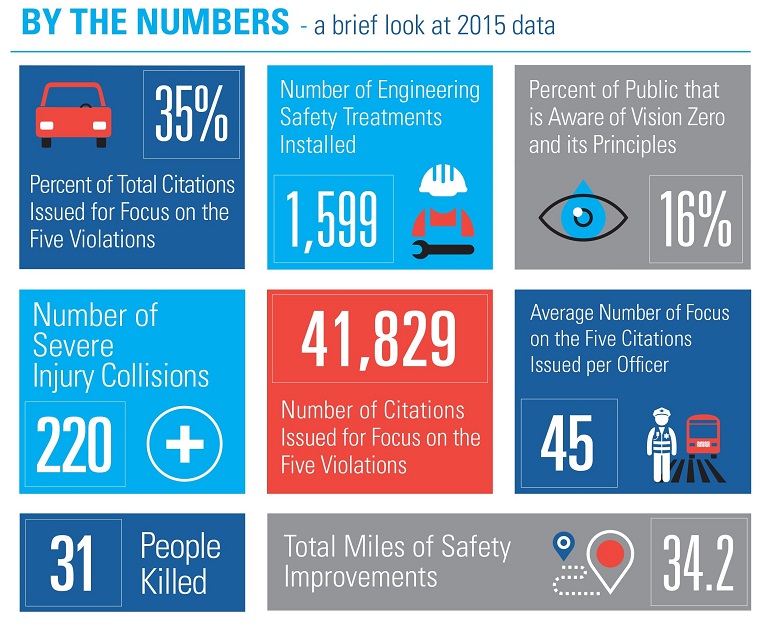 Even with all the progress we made in 2015, what stands out to me is that 31 people were killed in traffic crashes in San Francisco. It’s disappointing that to see that we had just as many traffic deaths in 2015 as we did in 2014.
Now some might ask, “Why should we support Vision Zero if there hasn’t an immediate decline in traffic deaths?”
Well, the first thing to remember is that Vision Zero is a long-term commitment. We knew this would take time and these past two years are just a beginning. As our engineering, enforcement and education efforts ramp up, we expect to see a sizable drop in the number of fatalities once all three crucial facets are in full swing.
But beyond remembering this is a long-term effort, I think there are three compelling reasons why Vision Zero is more important than ever:

As a county, San Francisco has the highest rate of traffic deaths in California. 30 people die and 200 more are seriously injured in crashes each year in SF.
Are we willing to say this is acceptable? Is this the price we have to pay for mobility? What if it was your family?
Vision Zero means building safer streets, enforcing the law, and educating the public on traffic safety. Working to prevent senseless traffic deaths is not only our responsibility, it’s the right thing to do.

2. The Personal and Financial Cost

When someone dies in a crash, their life is gone and there’s a profound impact on their loved ones and on their communities.
Traffic deaths and injuries have a real financial cost too. In San Francisco, the annual medical costs for pedestrians injured in traffic collisions is $15 million and the total economic cost of traffic injuries and fatalities is $564 million.

3. A Better Transportation System for Everyone

Road safety improvements aren’t just right, they’re smart. They make our transportation projects more competitive for local, state and federal funds, and they also help us build more comprehensive projects.
We’re tying safety elements into broader transportation projects, which creates more benefits for our residents, workers and visitors. For example, the Van Ness Improvement Project, which breaks ground this spring, won’t just bring major Muni upgrades to Van Ness Avenue, we’ll be installing significant pedestrian safety upgrades as well.
At the end of the day though, there is no silver bullet to stopping traffic deaths. It’s going to take the city and its communities coming together to make traffic safety a priority and responsibility. It’s going to take your help.
Zero traffic deaths is an ambitious goal, but I think we can all agree it’s the right one.
---
Street Talk is an SFMTA blog series by Sustainable Streets Director Tom Maguire where we share our thinking on the big picture questions and concerns facing our streets today.

Tom Maguire is the director of the SFMTA's Sustainable Streets Division. He joined the agency in 2014 after serving as Assistant Commissioner at the New York City Department of Transportation, where he oversaw New York’s Bus Rapid Transit, Freight Mobility, Peak Rate Parking (PARK Smart), and Alternative Fuels programs, and directed the effort to implement congestion pricing in Manhattan in 2007-2008.  Tom has also worked in the private sector at the engineering and design firm Arup. He holds a Master’s degree in City and Regional Planning from UC Berkeley and a B.A. from Rutgers.

(Source: https://www.sfmta.com/about-sfmta/blog/vision-zero-2015-why-safer-streets-are-more-important-ever)
Posted by Anonymous at 16:27