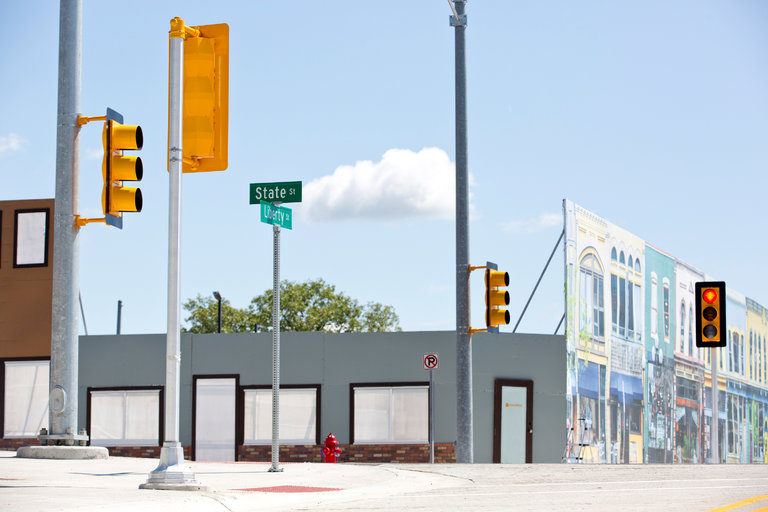 Mcity in Ann Arbor, Mich., is one of a halfdozen testing grounds for autonomous vehicles in the world as automakers and technology companies compete to create the perfect selfdriving car. Laura McDermott for The New York Times


ANN ARBOR, Mich. — Here in this college town 40 miles west of Detroit, behind black sheeting attached to an eightfoottall chainlink fence, the future of the auto industry is being worked out in a secret setting.

The fence surrounds a testing center called Mcity — a 32 acre patch of land that aims to recreate Anywhere, U.S.A., complete with simulated city streets and intersections. Within its borders are 13 types of traffic lights, storefronts, road signs, parking meters and a tunnel. A railroad crossing will be added soon.

Mcity is one of a halfdozen or so testing grounds for autonomous vehicles in the world as automakers and technology companies engage in a heated competition to create the perfect selfdriving car — and to keep their competitors from knowing how they are doing it.

But while they have honed the technologies that enable cars to find their way on their own, these companies now face an even more daunting challenge: how to take that technology, with all its promise, and make those cars perform flawlessly in an unpredictable world.

Both the car companies and regulators have decades of experience making vehicles safer in crashes, but the means and methods for validating the reliability and safety of selfdriving cars have not even been invented.

“When you no longer have a human doing the sensing and decisionmaking, the car has to be flawless,” said John Maddox, an assistant director at the University of Michigan Mobility Transformation Center.

Mcity officials can name the companies that use the site — Ford, General Motors, Honda, Toyota, Nissan and the auto parts suppliers Bosch and Delphi, among others — but little beyond that. Demonstrations for the public or media are rare.

After all, Mcity is a place for trial and error, outside of the public eye, in an industry where errors can cripple a reputation.

On a recent sunny afternoon, a gap in the sheeting afforded a view of a black Lincoln MKZ sedan with sensors mounted on its roof and two engineers in the front seats. It crept cautiously toward an intersection, slowed to a stop and executed a right turn, using its turn signal, of course. The black car made its way through the artificial downtown.

Moments later, a white Lincoln MKS rolled along a straightaway at about 25 miles per hour, swept around a wide left turn and negotiated its way through the downtown. Later, the cars stopped side by side under a green highway sign indicating a nonexistent ramp for I-96 to Lansing. There, the occupants stepped out to examine the rooftop sensors. After a long pause, the two cars repeated the same trek at a deliberate pace — much more slowly than the cars traveling on the public roads surrounding the site.

The testing is being conducted with the utmost care because the number of unanticipated challenges that arise on the road is almost limitless — a fallen limb, black ice, a reckless driver, a toddler in the street.

“There are real and significant questions about the safety of new technologies,” Mark Rosekind, administrator of the National Highway Traffic Safety Administration, said at an April 27 meeting in California. “The old model of counting vehicle miles and counting crashes and injuries is not sufficient.”

This month, the safety agency, which has limited authority to regulate the practice of testdriving autonomous vehicles on public roads, cautiously gave approval to several companies to begin testing on public roadways.

But the industry is not waiting around.

In addition to its Mcity effort, the University of Michigan is a partner in a project to set up a much more complex site about 10 miles away in neighboring Ypsilanti. It will be called the American Center for Mobility and will comprise 335 acres that were once part of G.M.’s Willow Run plant. During World War II, it was the site of a famed bomber factory. Mr. Maddox has been named the center’s chief.

Unlike Mcity, this larger site will have long stretches where autonomous cars can be tested at highway speeds and space for creating a variety of complex intersections. Its existing roadways include overpasses and bridges.

Ford is interested in potentially using the Willow Run facility, said Randy Visintainer, Ford’s director of autonomous vehicle development. “It is something we would probably have to create if it didn’t exist,” he said.

In California, a former military base has been turned into a 2,100-acre test site called GoMentum Station, where Honda has been testing its autonomous driving technology. It has about 20 miles of paved roads and a cluster of barracks and buildings that provide an urban environment. It is also a secure location where companies can test cars in private.

Outside Blacksburg, Va., Virginia Tech set up a test site that incorporates stretches of public roads and a closed track.

The challenge, by all accounts, is enormous.

This year, an Audi executive mused upon how difficult it would be for a driverless car to distinguish between a shopping cart and a baby carriage. Delphi has reported that the systems it is working on struggle at times to read traffic lights. The problem? The glare of a setting sun.

“The bottom line is if you have a 4,000-pound car in the same space as a 200-pound human, you have to know the vehicle is going to react exactly the way you want every single time,” Mr. Maddox said. “It’s going to take a lot of testing to validate that.”

The Willow Run test track is supposed to have an engineering center where Mr. Maddox hopes automakers and regulators can work together to develop new test methods.

So far, most of the testing of autonomous vehicles has taken place on public streets.

Google says its cars have driven more than 1.5 million miles in the testing it conducts on roads near its headquarters in Mountain View, Calif. In recent months, it has expanded its testing program to Kirkland, Wash., Austin, Tex., and Phoenix. All other companies have accumulated far fewer test miles.

Mr. Maddox suspects that is a small fraction of the testing that needs to be done. On average, he noted, a fatal accident happens once for every 100 million miles that Americans drive. “We are a long way from having enough experience,” he said.

A recent study by the RAND Corporation concluded that autonomous vehicles might have to be driven hundreds of millions, or even billions, of miles to reach a statistical certainty of their safety.

Moreover, onroad trials fall short of what is needed. If an autonomous car doesn’t react properly in a realworld situation — if, for example, a building’s shadow causes the car to slow suddenly — the situation cannot be recreated and repeated to identify the issue and finetune the car’s sensors, said Huei Peng, an engineering professor and director of the University of Michigan Mobility Transformation Center.

“We have to see how these vehicles interact with their surroundings and need repeatable, reliable tests to do that,” he said.

And crashes do occur. Google’s cars, as of last September, had 16 crashes, and all were because of human error, the company said at the time. In a report to California regulators, Google disclosed that human drivers had to take control of its test cars 341 times in a 15-month period covering 2014 and 2015, including 13 incidents when the car would have crashed had the driver not intervened.

Google and Fiat Chrysler Automobiles are working together to have a test fleet of 100 minivans driving themselves around roads in Michigan and elsewhere by the end of the year. Google is setting up an engineering center in Novi, Mich., to equip the minivans with selfdriving technology.

In the same time frame, Ford plans to expand its fleet to 30 selfdriving prototypes from 10. G.M. and its partner, the ridehailing startup Lyft, hope to have a test fleet of driverless taxis running within a year.

A version of this article appears in print on June 6, 2016, on page B1 of the New York edition with the headline: The Unpredictable, Under Control.

(Source: http://www.nytimes.com/2016/06/06/business/for-driverless-cars-citylike-test-sites-offer-the-unpredictable.html)
Posted by Anonymous at 09:03