Next City: More Accurate Bicycle Counter Could Give Complete Streets Advocates a Boost 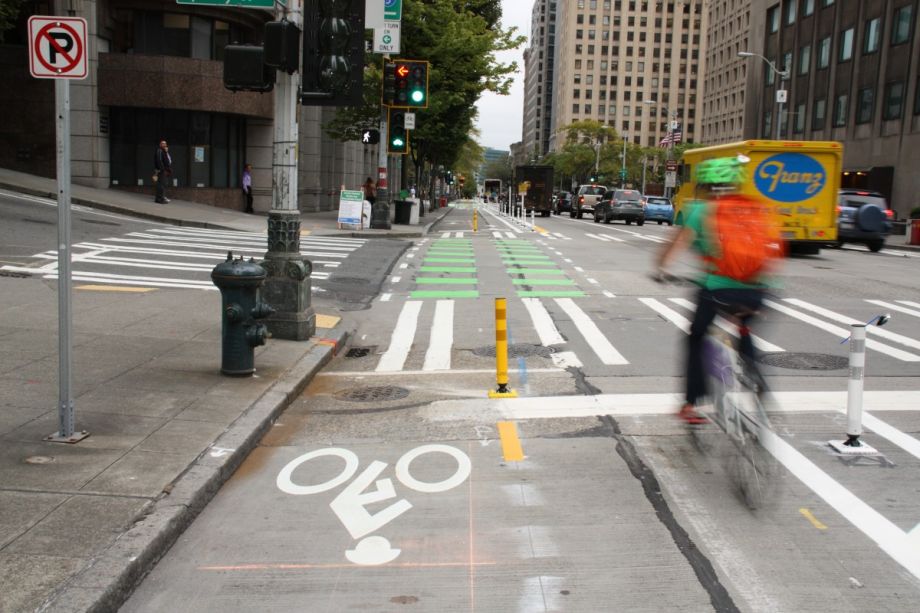 
2013, the League of American Bicyclists released a report, “Where We Ride: An Analysis of Bicycling in American Cities,” which gleaned insight from the Census Bureau’s 2012 American Community Survey. Among the many data points about growth, cyclist demographics and more, the League discovered that from 1990 to 2012, bike commuting had grown fastest in Detroit.

But Detroit Greenways Coalition Director Todd Scott cautioned me at the time that the statistic was as much a reflection of the shortcomings of using ACS data as it was of the success of Detroit bike advocacy. Pointing to the fact that ACS margins of errors are quite significant when dealing with fractions of percentage points (biking in Detroit grew from .1 percent to .6 percent of the mode share) and that the numbers only reflect people who bike to work as their primary transportation choice, Scott said, “ACS travel-to-work modes speak as much about land use density, jobs types and demographics as … bike friendliness.”
Despite its shortcomings, advocates continue to cite ACS data. After all, they need some way to show their work is having an impact.
“The work we do as advocates is largely about growing bicycle participation,” says Jennifer Boldry, PeopleForBikes’ director of research. “We don’t know whether we’re successful at that if we don’t have numbers to show it.”
She continues, “And when someone looks at ACS bike to work mode share and they see a number that’s less than 1 percent of the activity … it’s not very powerful.”
For a long time, ACS numbers and one-day hand counts by advocates, volunteers or city staff were among the only ways to glean ridership numbers. But a new crop of data collecting technology — including bike-counter totems, GPS-enabled smartphone apps and cameras that use machine learning — is changing that equation.
Tech startup CTY is producing the latter of those three technologies to count bicyclists, pedestrians and more. Their data counting hardware —​ called Numina — is essentially a camera mounted 15 feet up on a light pole capturing video of a piece of infrastructure. The software is programmed to recognize and count patterns such as a bicyclist or walker crossing the screen. The sensors send the aggregate data via cellular signal to CTY’s servers and erase the original images.
CTY CEO Tara Pham explains that they built Numina in part to address the ACS numbers problem. “We started building this as a bike and pedestrian counter because we have a lot of data to justify car infrastructure, but not a lot that helps justifies complete streets infrastructure,” she says.
Pham says Numina can also track behavior on a given piece of infrastructure — where a cyclist rides on a street, whether they choose the sidewalk over the bike lane, spots pedestrians avoid and more. 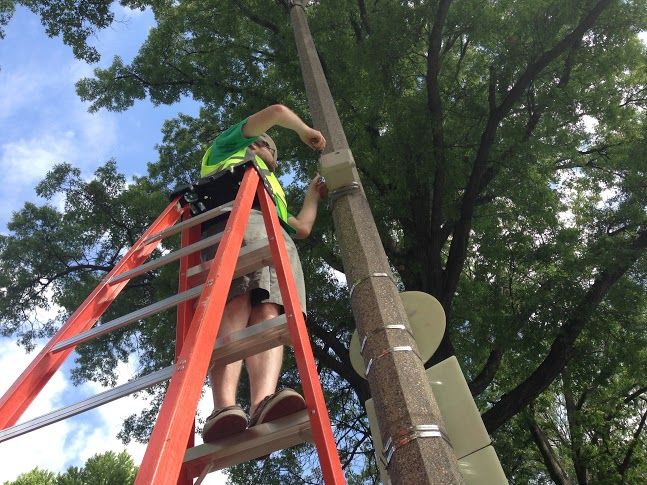 A Numina prototype is installed on Tower Grove Avenue in St. Louis. (Credit: CTY)
Numina got its first real-world test last summer. With a Knight Foundation grant, CTY set up sensors in St. Louis to measure the impact of two traffic-calming projects the city built. Pham says the city hasn’t done anything with the bike and pedestrian counts they collected. “They don’t necessarily have the capacity to translate this into improved policy or new infrastructure,” she says. But the project helped CTY refine Numina’s technology and their vision for its use.
Pham says Numina is never going to replace the big picture data ACS provides, nor is that their goal.
“We’re really excited about Numina being a tool to A/B test the built environment in real time,” she says. “We want to provide data that helps planners make infrastructure more walkable, bikeable, basically more responsive to people. As cities grow, as self-driving cars become more prevalent and car ownership goes down, we’re going to see a lot more things to make the city more immediately reactive to people.”
One thing ACS provides that Numina and other sensor-based counters do not is demographic data. Granted, it’s a very small sliver of the population since it only counts people who bike as their primary commute mode, which ignores a large swath of the population that bikes to run errands or go out to eat or is currently unemployed.
For Boldry, some of the most exciting data is coming from companies such as Strava and MapMyRide, which track routes via GPS units and smartphone apps and can provide demographic data about users.
“It’s exciting for a number of reasons,” she says. “It’s actual behavior, not self-reported; you can learn a lot about riding frequency; and you can see where infrastructure is and where people are actually riding to see missing connections.”
Of course, like all existing technologies, GPS tracking has its shortcomings. “The challenge is just getting adoption widespread enough for it to be meaningful,” Boldry says.
Because GPS data requires a GPS unit or a smartphone and requires people to actually use their GPS or app every time they ride, it suffers from selection bias as well.
For that biggest picture of bicycling’s growth in the U.S., however, the options are still ACS or benchmarking surveys. PeopleForBikes is conducting such a survey every other year to track the growth of all types of cycling in the U.S. Boldry says the survey isn’t perfect since it relies on self-reporting, but “it goes out to a sample that’s representative of the U.S. population, so it’s nationally coverable, we learn demographics, we learn frequency.”
The Works is made possible with the support of the Surdna Foundation.


(Source: https://nextcity.org/daily/entry/counting-bikes-pedestrians-numina-startup)
Posted by Anonymous at 08:47