Next City: It’s Time for U.S. Cities to Ban Right Turns on Red 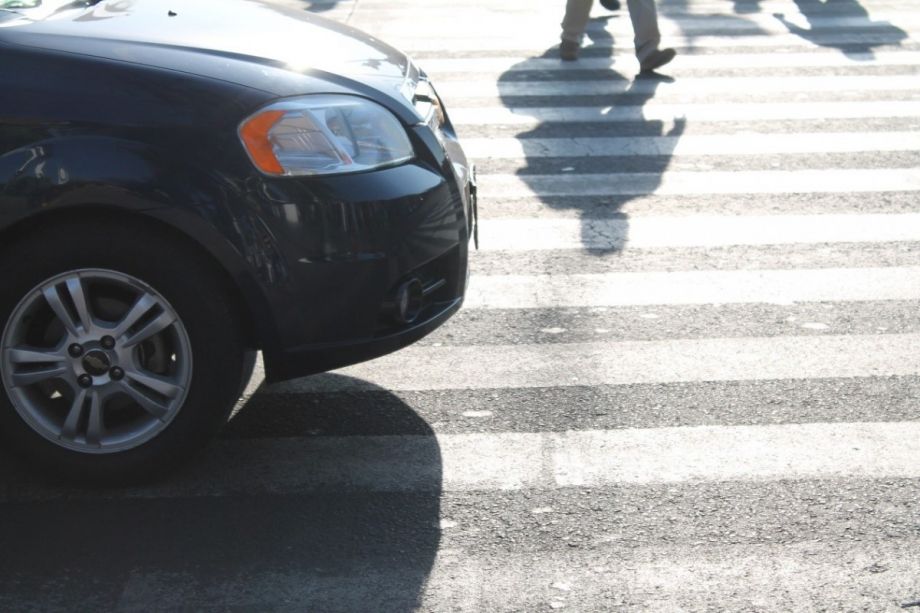 
st fall, the Seattle Department of Transportation banned right turns on red (RTOR) at 10 downtown intersections. The spot bans came as part of the city’s implementation of a Vision Zero plan. Those 10 intersections are among Seattle’s worst for car-on-pedestrian crashes and typically involve a turning car hitting a person crossing the street. The small-scale ban is a step in the right direction, but if cities truly cared about pedestrians, they would outright ban RTOR.
Rarely a walk goes by that I don’t have to deal with a driver who’s rolled their car into the crosswalk to wait for their chance to take a RTOR. As an able-bodied person, walking around the nose of a car is a minor inconvenience for me. But why should the driver’s minor convenience of turning early trump my convenience of a clear crossing? More importantly, for a person in a wheelchair or someone using a walker, that car in the crosswalk is a serious impediment. If you’re moving slowly and rely on a clear path from curb cut to curb cut, a car in the crosswalk can make it impossible to cross the street in the meager time allotted by the walk signal.I love walking around Seattle. It’s healthy, it’s free, it provides screen-free thinking time and gives me views of the city I would never notice by bike, bus or car. But, thanks almost entirely to inconsiderate drivers, walking is almost always a frustrating experience. Over the last few months, I’ve noticed that RTOR are the root of a whole lot of that inconsideration.
Occasionally, the consequences of RTOR extend beyond inconvenience. A few weeks ago, I was walking along Roanoke Street near my apartment in Seattle’s Eastlake neighborhood. Roanoke crosses over the end of an I-5 offramp. Because cars come whipping off the highway, I always wait for the walk sign to cross. When I arrived at the intersection, there was an Escalade stopped at the edge the crosswalk. The driver had a red light. I had the walk signal. As I stepped in front of the chest-high grill of the man’s shiny black status symbol, he saw a gap in oncoming traffic and started rolling forward. Unfortunately he didn’t see me. I waved my arms and shouted. He slammed on the brakes. I gave him my best death glare. He responded with a shrug. I certainly could’ve done a better job making eye contact with the driver to make sure he saw me before I stepped into the street. But the onus should be on the guy driving a 5,500-pound truck to make sure he’s not going to run someone over, especially when he doesn’t have the right of way.
The data on RTOR crashes is somewhat spotty. SDOT spokesman Norm Mah says there have been 212 pedestrian collisions in the past three years where the vehicle was turning right and hit a pedestrian. But that data includes both signalized and unsignalized intersections and doesn’t indicate whether the light was red or green at the time of the crash, so it’s tough to pinpoint RTOR crashes.
Some of the most recent data is from a 1995 National Highway Traffic Safety Administration study. They analyzed four states’ crash data from 1982-1992 and found that RTOR accounted for only about .05 percent of total crashes. RTOR accounted for .06 percent of all crashes resulting in serious injury fatality.
But, the study also found that pedestrians and cyclists were frequently involved and, unsurprisingly, the consequences were much higher for them. Pedestrians and cyclists were involved in 22 percent of RTOR crashes and 93 percent of those crashes resulted in injury for the walker or biker. Luckily only 1 percent of RTOR crashes that involved a pedestrian or cyclist caused a fatality.
The data alone admittedly doesn’t make much of a case for banning RTOR (though we’re clearly overdue for an updated study). But neither does the rationale for allowing RTOR. The RTOR-as-national-standard grew out of the 1973 gas crisis. Some states allowed RTORearlier, but as supply dwindled and gas prices soared in the ’70s, the federal government pushed for all states to adopt it as a way to reduce idling and therefore improve fuel economy. A 1981 Federal Highway Administration study found that “RTOR saved between 1 and 4.6 seconds (or 9 and 30 [percent], respectively) of drivers’ time.”
Cars today are, on average, doubly as efficient as they were in the ’70s. Certainly we need to do everything we can to reduce our energy consumption in the face of climate change, but prioritizing the convenience of driving at the expense of safe and convenient walking and biking is a dubious way to go about it.
Seattle, like many of its peer cities, has stated goals to improve walking and reduce carbon impacts. I don’t for a second pretend that eliminating RTOR is going to make walking and biking’s mode share grow exponentially. But if Seattle continues to place the convenience of driving over everything else, driving is going to continue being the number one form of transportation in the city.
Everything about our transportation system prioritizes driving and everything about our driving culture prioritizes convenience above all other factors. It’s why drivers speed and tailgate and don’t stop for pedestrians in unsignalized crosswalks and buzz past bikes mere inches away when they think they won’t get caught. If cities want to move beyond car-first transportation systems in the long run, they need to shift away from cultural signifiers that consciously and subconsciously tell us that cars are king. Banning RTOR to put the safety and convenience of walkers over the minor convenience of drivers is a great place to start.
The Works is made possible with the support of the Surdna Foundation.