Editor’s note: Mobility Lab’s technology reporter Andrew Carpenter is spending the summer biking across the continental United States, reporting back on transportation issues he encounters along the way. His series, “Transpo(nation): A cross-country tour of how we get around,” begins in San Francisco.
My first full day in San Francisco, May 12, also happened to be the Bay Area’s Bike to Work Day. Since my goal is to ride anywhere, I followed my host through the Presidio, stopped at an energizer station with food, coffee and free bike checks, and continued through the city to the Ferry building. We were two among dozens of riders along just this one route.
The energizer stations, cheering volunteers and high density of cyclists along popular routes throughout the day provided a look into how bike infrastructure and community can help provide affordable transportation options in one of the country’s more infamously expensive urban areas.
Bicycling is certainly affordable, costing a fraction of driving and even transit. And the city has connected many of its neighborhoods, reducing stressful rides and therefore lowering barriers for many who might be wary of pedaling through traffic. It makes sense, then, that San Francisco’s biking population [PDF] continues to grow.

The author’s bike at San Francisco International Airport.
Connecting across topography
The Wiggle is one of the city’s primary commuter routes, helping bikers get in and out of downtown while avoiding particularly steep hills – a possibility I unfortunately was not aware of when I first rode in from the airport. Knowing that there is a way around geographic barriers encourages biking, and as the San Francisco Municipal Transportation Agency actively helps people find these routes, more will be willing to try it.
I followed The Wiggle downtown my second day in the city. Even after Bike to Work Day, the route was packed with bike commuters. Back at home in Washington, D.C., I’ve always been excited to see more than five cyclists at a time commuting to work. But in San Francisco, especially as riders converge on The Wiggle towards downtown, dozens of bicyclists line up together for blocks at a time.
Connecting by transit
For those who live outside San Francisco’s downtown core, biking all the way in is likely too far. But it can be a tremendous option as one leg of a trip – key to getting commuters to and from major transit corridors. Bay Area Rapid Transit and the San Francisco Bay Ferry provide spaces for bikes, depending on the level of crowding. Though it was an option, I didn’t take BART from the airport – the ferry was an especially pleasant experience, and the staff even approached to ask about my trip. Caltrain, which describes itself as having “the most extensive bicycle access program among passenger railroads in the nation” can carry up to 80 bikes on a train. 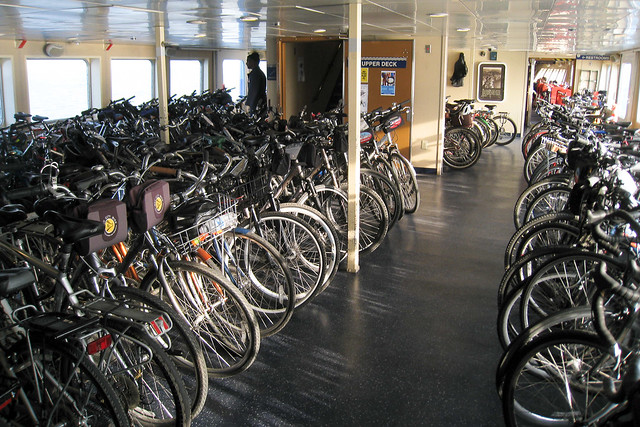 Bike racks on a ferry from Sausalito.
Space for bikes on BART, Caltrain and ferries is a great way that the area is increasing options for regional commuters, providing them more access to the system by increasing the distance they can cover to the station. The availability of electronic lockers for bike storage also offer some security to the process. By comparison, in the D.C. region, MARC, Amtrak and Virginia Rail Expressbike services into D.C. are restricted, if not entirely unavailable, limiting the options for commuters. I’ve foregone a few regional trips in D.C. due to this limited access.
Connecting by bikeshare
Bay Area Bike Share is currently anticipating a 10-fold expansion of bikes in its system by 2018, which would make it one of the largest in the United States. The system shows promise in creating more multimodal options for commuters, as stations specifically connect commuters from farther outside the city to their transit stations.
As it expands beyond downtown and across the Bay, Bay Area Bikeshare could follow the lead of D.C.’s Capital Bikeshare, New York’s CitiBike or Chicago’s Divvy Bikes and provide low-cost options to low-income residents. Lowering the barrier to such an integrated network is essential to keeping San Francisco accessible to everybody.
Connecting (in a good way) with drivers
While drivers in San Francisco have a certain level of aggression that one would find in any city, motorist behavior is markedly more courteous than in D.C. By building a culture and city design that encourage yielding to pedestrians and passing bikes at a safe distance, San Francisco creates a far more welcoming environment for active transport than some of its East Coast counterparts.
The San Francisco Bike Coalition plays an important role in this by training professional drivers of fleet vehicles in safe driving practices. This makes the streets far more welcoming by raising awareness among drivers but, more importantly, building a working relationship between them and the biking community, something far more likely to garner positive results than a black-and-white combative stance.
Connecting the region
Disconnected bike corridors fail to provide a truly safe transportation network. Low-stress biking should be connected throughout a city or it threatens to separate neighborhoods from each other, especially if they already lack a transit connection. Disconnected neighborhoods as such can exacerbate the growth of inequality.
San Francisco appears to be addressing this, by creating a very extensive network of bike lanes and routes, such as the Bay-to-Beach Bikeway, that connect almost every neighborhood within the city.
These lanes extend into the surrounding region. I was able to bike all the way from San Francisco International Airport into the city using lanes and the San Francisco Bay Trail. Only one steep downhill at the city’s edge felt a little tricky, though I could have avoided it by taking the longer route following the Bay all the way in.
Bike connections within San Francisco are essential, and have shown their worth. Expanding the network beyond the city limits, through on-street facilities and transit connections, will prove to be a major step in reconnecting people who have been pushed outwards from the core. Even if biking from the suburbs is not one’s primary option, it is still available as a backup.
The Bay Area has great multimodality options, with bike access to trains and ferries, as well as miles of bike lanes and trails that connect downtown to relatively distant places, like the airport 15 miles out. With its expansion, Bay Area Bikeshare has the opportunity to provide lower-income neighborhoods with last-mile connections to these transportation corridors.
San Francisco has made great strides, and is still working towards becoming a more bike-friendly city. There is a strong, encouraging community that is engaged in making biking an accessible transportation option for all residents in the entire area. As a result, biking is growing as an affordable way to connect everyone.
Photos, from top: Riders on the Wiggle (San Francisco Bicycle Coalition, Flickr, Creative Commons). The author’s bicycle, loaded up at the airport (Andrew Carpenter). Bike racks on the Sausalito Ferry (Doug Letterman, Flickr, Creative Commons).

Andrew is Mobility Lab's tech reporter, and is interested in using technology and transportation to build communities and bring them together.