LA Times: Bill to expand Metro board is shelved in Sacramento 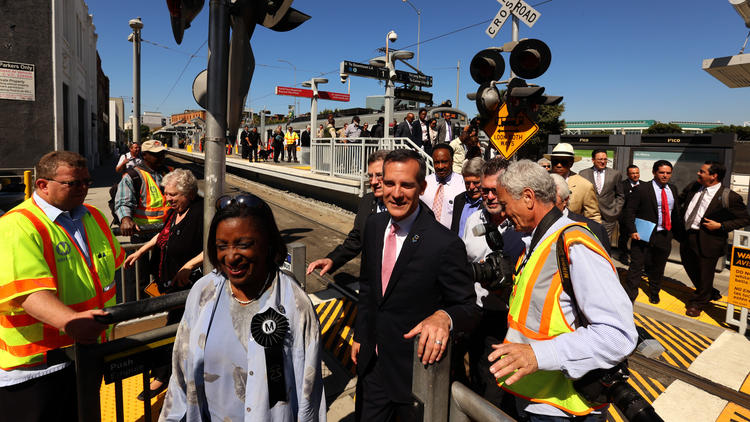 A bill in Sacramento would have added eight members to the Metro Board of Directors. Above, L.A. Mayor Eric Garcetti, center, and Metro officials at a celebration for the 25th anniversary of the Blue Line. (Genaro Molina / Los Angeles Times)
June 3, 2016 / 5:00 AM
Laura J. Nelson Contact Reporter
Sacramento lawmakers shelved a bill Thursday that would have added eight members to the agency that oversees Los Angeles County’s buses and growing rail network, citing unresolved concerns over the legislation.
The bill, authored by Sen. Tony Mendoza (D-Artesia), would have added Metropolitan Transportation Authority representatives from Long Beach and other cities across the Southland.
Highlighting one of Metro’s longest-running tensions, Mendoza said many of the county’s 88 cities are underrepresented on the agency’s board, leading to planning and funding decisions that favor Los Angeles at the expense of farther-flung cities.
“It’s so blatant, and so disappointing,” Mendoza said. He said he plans to iron out concerns with the bill, including those from Los Angeles, and try again later this year or next year.
But the bill has already raised concerns among local transportation officials who saw the proposal as an attempt by Sacramento to influence the planning process for Metro’s ambitious $120-billion sales tax proposal, which is expected to appear on the November ballot.
“Unbalanced” representation on the agency’s board led to a proposal that ignores the needs of voters in smaller cities, whose support will be needed to reach the required two-thirds voter approval threshold, Mendoza said.
The southeast cities are very upset. We've waited decades for our turn, and now we have to wait again.— Sen. Tony Mendoza (D-Artesia)

He and other elected officials from southeast Los Angeles County have been vocal about their displeasure with the plan, pointing out that the rail projects that would be built first are in the northern part of the county. A rail line down Van Nuys Boulevard and an extension of the Gold Line to Claremont are both slated to open before 2030.
But a long-discussed rail line from Union Station to Artesia would be built in two phases, nine years apart, with the full line beginning service in 2047. Under a previous sales tax that voters approved in 2008, the $4-billion project received seed funding and a tentative opening date of 2027.
“The southeast cities are very upset,” Mendoza said. “We've waited decades for our turn, and now we have to wait again.”
In an April 15 letter to the Metro board obtained by The Times, Mendoza and Assembly Speaker Anthony Rendon said pushing the Artesia light-rail route to the back of the line is “unacceptable.”
“We want to support the new tax measure as our communities did before … but our constituents need to know that MTA will keep its promise,” they wrote.
Metro director Don Knabe raised similar concerns at a recent board meeting, saying high-profile projects — including a rail tunnel through the Sepulveda Pass — had “leapfrogged” projects that had been scheduled to open earlier under Measure R.
Regardless of whether his bill passes later this year or next year, Mendoza said, he will campaign against Metro’s ballot measure, and encourage other elected officials to do the same unless the agency bumps up the 2047 opening date.
“If this measure fails, great,” Mendoza said. “We will go back to the drawing board, and we'll pass it in two more years.”
Mendoza’s bill had the support of Senate President Pro Tem Kevin De Leon (D-Los Angeles) and Sen. Ricardo Lara (D-Bell Gardens), both of whom represent areas where the Artesia line would run. Metro, the city of Los Angeles and the Board of Supervisors formally opposed it.
The Metro board is composed of the five county supervisors, L.A.’s mayor and his three appointees, and a representative from each of the county’s four sub-regions. Los Angeles residents make up about 40% of the county population.
Mendoza’s proposal would have added seats for the mayor of Long Beach, four more sub-regional representatives, one more Los Angeles vote, and two members appointed by Assembly speaker and the Senate Committee on Rules.
A board made up of 22 voting members is closer to the average number statewide, Mendoza said. Riverside County’s transit board has 34 members, and San Bernardino County’s has 20.