Oil, coal, and gas aren't running out. But as renewables get cheaper, they are going out of style. 
Worldwide use of fossil fuels will peak in 2025. Solar will be the least expensive form of electricity by 2030. And, by 2040, zero-emission forms of power will represent 60% of the global mix. These are some of the predictions of a new report from Bloomberg New Energy Finance, which looks at long-term trends in the energy market.


BNEF's forecast for fossil fuels comes not because it thinks fossil fuels are going to run out. Instead, it expects demand for coal and gas to remain flat through 2040, as advanced countries move to cleaner forms of energy (India, by contrast, is set to raise its need for coal capacity). BNEF expects wind and solar power to be devastatingly cheap by 2040, and that increased battery capacity will allow us to use more clean power in a stored form. It predicts the cost of onshore wind will drop 41% by 2040, and for solar to account for 43% of all new generating capacity by 2040.

The report provides good news for electric vehicles, which have been generally slow to take off (unless you live in Norway). By 2040, BNEF expects EVs to make up a quarter of the global car fleet and to add a total of 8% to total electricity demand as a result. Better batteries for cars will in turn lead to better batteries for grid and household power storage, thus allowing us to use more of power generated by solar and wind.
One surprise is that natural gas plays a relatively small part of the picture. Despite the fracking boom, and talk of gas being a "bridge fuel," it makes up little more of the mix than it does now. "One conclusion that may surprise is that our forecast shows no golden age for gas, except in North America. As a global generation source, gas will be overtaken by renewables in 2027. It will be 2037 before renewables overtake coal," BNEF economist Elena Giannakopoulou said in a news release. 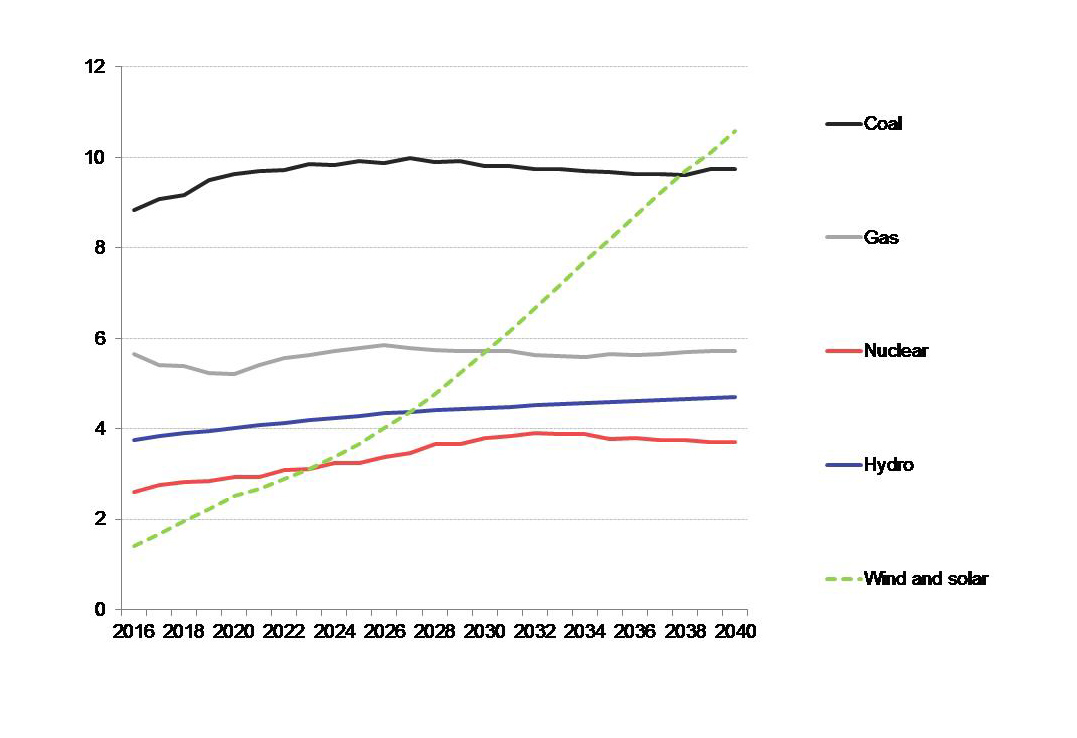 The report is good news for renewables, but not necessarily for climate change. It predicts a staggering $7.8 trillion of investment in clean energy by 2040. But it says another $5.3 trillion would be needed if the world is to stay within the two degree global warming limit deemed relatively safe by climate scientists. One reason: India is set to take China's place as the world's leading energy-related polluter. BNEF forecasts China's power emissions will drop 5% between 2015 and 2040, while India's emissions, due to its reliance on coal, will double.
Read more from the report here.  [Click in the image below for the Executive Summary.]

(Source: http://www.fastcoexist.com/3060908/the-world-is-nearing-peak-fossil-fuels-especially-the-developed-world)
Posted by Anonymous at 23:31