Co.Exist: Santiago's Subway Will Soon Be The First To Run On Mostly Solar And Wind Power

TransportiCA Note: While this is not a California-centric piece, it is yet another example of how other countries - some considered "less developed" - are light years ahead of sustainable transportation.  Even sadder, most of the technology in this system below is from California.


A solar system will pump electricity directly from Chile's Atacama desert to the city, 400 miles away.

The Atacama region in Chile—where it essentially never rains—is the sunniest place on the planet. By 2017, some of the solar power produced there will be sent hundreds of miles away to the subway in Santiago, the first metro system in the world that will get most of its power from renewable energy.
The subway, which serves 2.5 million commuters every day, will get up to 60% of its energy from a new solar installation and up to 18% from the nearby San Juan wind farm.
Though Chile is particularly sunny, the fact that a massive, power-hungry subway will be powered in large part by the sun is a testament to the rapid rise of solar as the cost of the technology keeps falling. "I think this is a sign of the mainstreaming of solar," says Tom Werner, CEO of SunPower, the California-based solar company that is designing and building the system. 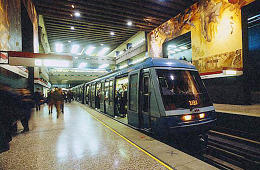 The 100-megawatt solar system will be mounted nearly 400 miles away, just south of the Atacama Desert, and then the power will be transmitted directly to the Metro. While some organizations that claim to run on renewable power are actually tapping into a standard grid—and just offsetting the amount of energy they use—the Metro is an example of a new trend in direct connections. SunPower is installing similar systems that will connect to Stanford University and some Apple data centers.
The panels are part of SunPower's prefab, modular system that's quick to install without skilled labor, keeping costs down. "In the old days, which was like five years ago, you had welders in the field, you had electricians wiring, you had a lot of expensive trades that you had to move to the field," Werner says. "We've now moved that to a pre-assembled system."
Because the desert is quite dusty, the system also uses special robots to keep the panels clean, increasing the amount of power generated by up to 15%.
Werner thinks it's likely that other subway systems could follow. "Metros are energy intensive," he says. "And of course in the urban areas where you have metros, the air quality is something that's very visible and people are very aware of, so they're motivated to go renewable. The value's gotten so good they can save money. I think this is the beginning of a widespread trend."


(Source: http://www.fastcoexist.com/3060276/santiagos-subway-will-soon-be-the-first-to-run-on-mostly-solar-and-wind-power?utm_source=mailchimp&utm_medium=email&utm_campaign=coexist-daily&position=5&partner=newsletter&campaign_date=06062016)
Posted by Anonymous at 07:12