Co.Exist: Mapping The Potential Demise Of Coal Shows How Badly We Need A Carbon Tax

Play with these interactive maps and imagine a path toward ending coal.


In 1990, the U.S. got more than 50% of its electricity from coal-fired power plants. Today that figure is nearer 30%, and all the evidence says it's likely to continue dropping. With plenty of cleaner-burning natural gas available (though with some costs), new environmental regulations, and the price of renewables falling fast, it's only a matter of time before coal dies a death as a major energy source. (Which is tough if you're in the coal industry, but a good thing if you want to reduce climate-altering emissions.)
But how quickly might that happen?
The CoalMap, developed by researchers at MIT, models coal's decline under different price conditions. Use the toggles on the right to set rates for wind and solar prices going forward, how much the federal government might give in tax support, and the level of carbon tax, if we ever see such a thing (it doesn't look likely at the moment). The map shows the effect on coal plants (red dots), solar plants (yellow), and wind installations (green). The map shows the "levelized cost of electricity" (LCOE) for coal—that is, the minimum prices needed for that plant to break even over its projected lifetime—and compares that with the LCOE of nearby solar and wind plants, based on projections from the U.S. Energy Information Administration and the National Renewable Energy Laboratory. (The researchers, Joel Jean, David Borrelli, and Tony Wu, outline their full method in a paper accompanying the tool.)
CoalMap shows the importance of carbon pricing to renewables. Say we assume continued 5% year-on-year price declines for solar and wind. Then we imagine that Congress fails to renew federal tax credits for wind and solar at the next renewal dates in 2019 and 2022—as seems quite likely. In such a scenario, the U.S. is still covered in red dots indicating coal plants. 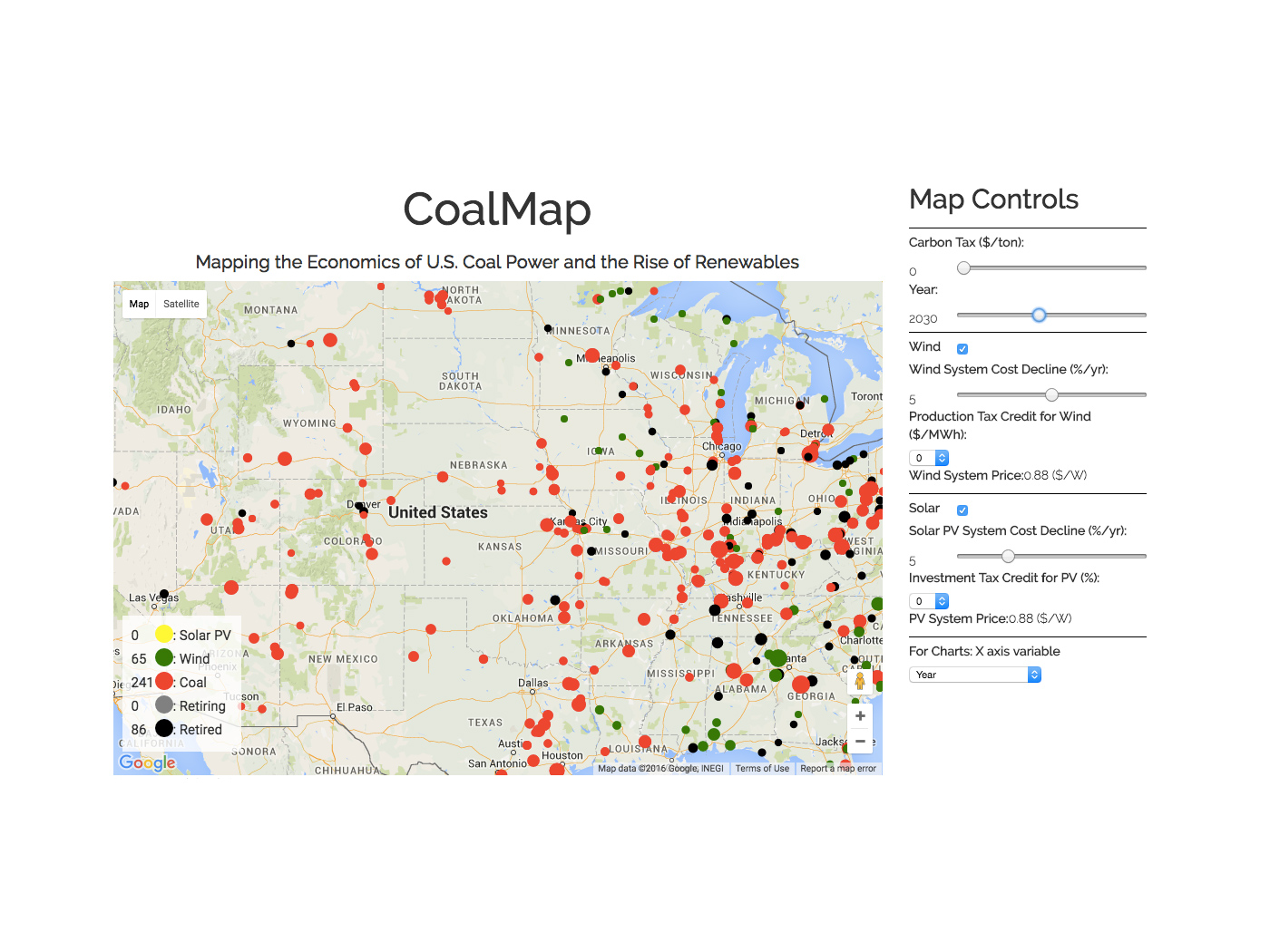 But if we introduce a carbon tax, the picture changes dramatically. Using the Environmental Protection Agency's own "social cost of carbon"—which, at about $40 a ton, calculates future damages from climate change in today's dollars—by 2025 most of the red dots have gone, and by 2030, coal has all but disappeared. Unsubsidized wind and solar would become competitive with fully amortized coal by 2019 and 2031 respectively, the paper says.
"Our findings highlight the importance of technology improvement and appropriate public policy in achieving climate-change mitigation targets," the authors write. "If high rates of solar and wind cost reduction are sustained through technological and financial innovation, and if carbon emissions are appropriately priced through a carbon tax or cap-and-trade regime, new low-carbon generators could help send the aging U.S. coal fleet off to a well-deserved retirement within the next two decades."

(Source: http://www.fastcoexist.com/3061397/mapping-the-potential-demise-of-coal-shows-how-badly-we-need-a-carbon-tax?utm_source=mailchimp&utm_medium=email&utm_campaign=coexist-daily&position=3&partner=newsletter&campaign_date=06302016)
Posted by Anonymous at 14:53