Co.Exist: Is Solar Power Only For The Rich? Sort Of

Solar households in California are more wealthy than those without. But as costs drop, so does the barrier to entry. 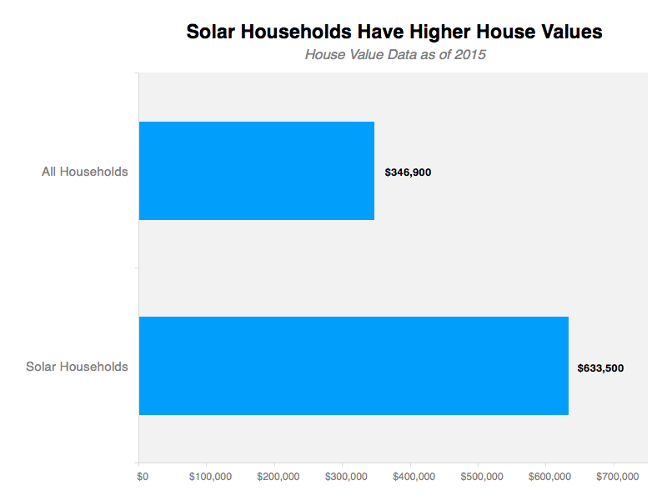 Today, solar is cheaper than ever. Way cheaper. Back in the 1970s, the solar cells alone costs over $77 per watt, and that’s before you get to the glass cover, the frame, or any of the rest of the installation. Today, the whole shebang can be had for as little as 57 cents per watt. Even so, solar is still the preserve of the rich.


The data analytics company SolarPulse looked at more than 11,000 California households and found that those with solar are worth $633,500 on average, almost twice as much as those without solar, which were worth an average of $346,900. The difference in income is smaller, but there’s still a pretty big gap: The average income for non-solar households is $86,800. For solar households, $117,400.
Perhaps that’s to be expected. Solar can end up cheaper in the long term, and the growth of financing options means you can go solar without putting any money down. But for people on a lower income, maybe solar conversion is low on the list of priorities. But as prices get ever lower, more and more people are switching.
Take a look at this chart, which shows the number of households going solar, year by year. 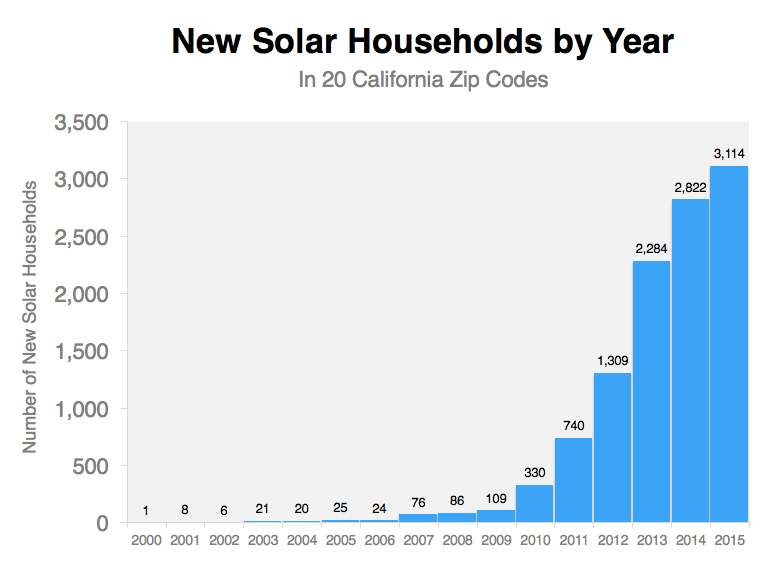 The number of annual installations has grown almost tenfold in just the last five years. That’s quite a jump. The number also show that the average income of a solar household is dropping over time, as are the house values. In the 2006-2011 period, the average price of a solar house was $848,200. From 2012-2016, it had dropped to $605,400. 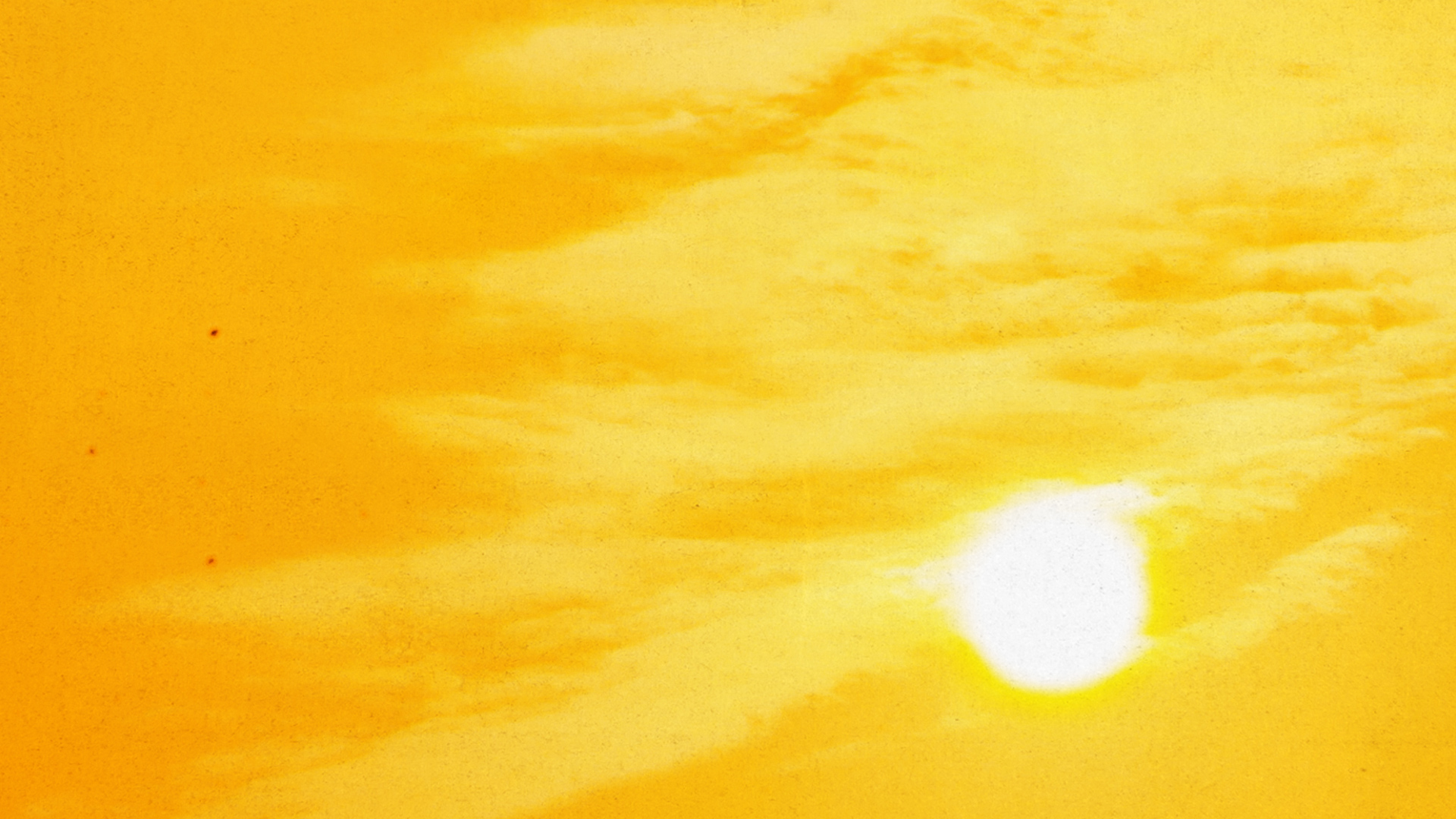 What’s driving this change? The clues are all there, in the numbers above. Residential solar, says SolarPulse, is now a financial decision, not an environmental one. SolarPulse’s data includes a measure of the "environmental orientation" of households based on their purchasing behavior and this shows that environmental concerns are becoming less of a factor. As solar prices drop, solar is actually becoming a way to save money. This is mirrored in the dropping of the credit score required to get a financed solar package.
Just like any kind of new technology, it starts off a something bought by the rich or by the very committed. Cellphones, VCRs, personal computers. All of these were the domain of the early adopter, and then, as prices dropped, everybody got them. Could the same happen for solar energy? Going by these numbers, it certainly looks that way. 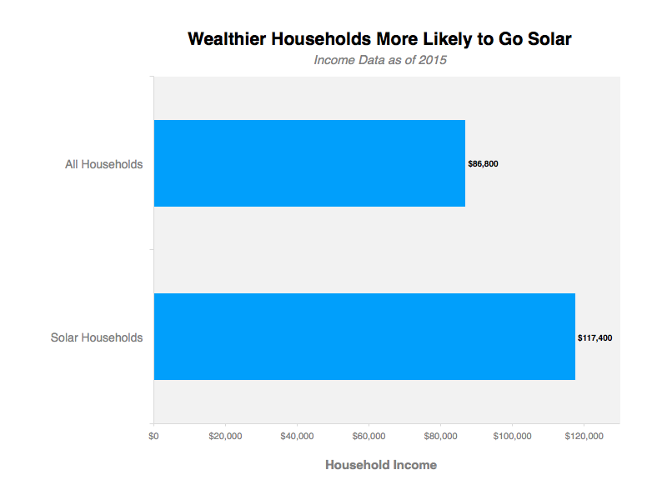 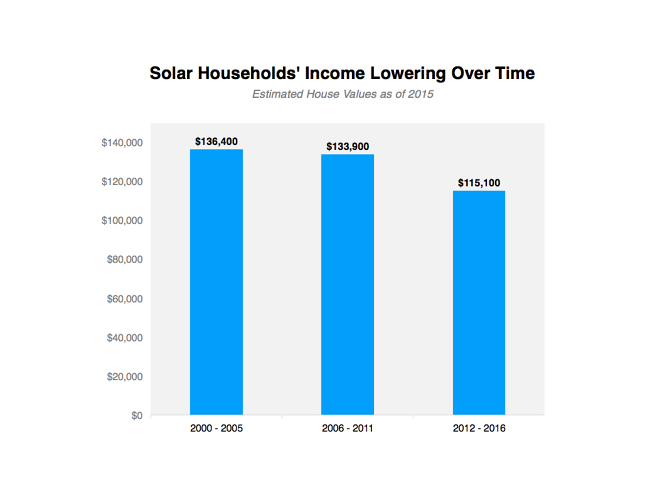 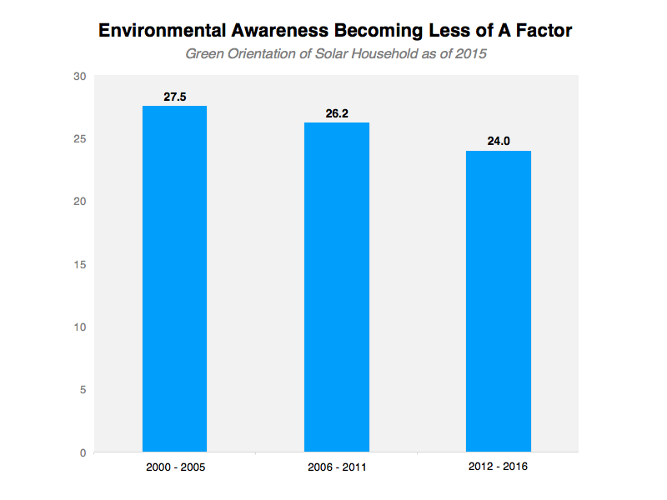