Atlantic/CityLab: No Driver's License, No Job?

TransportiCA Note: Below is a very poignant article from the Atlantic regarding not having a driver's licence, and how it is being used as a barometer for employment.  This use unfairly impacts ethnic minorities and low-income populations, as well as, reinforces the inequity / insanity of the nation's transportation system - especially how repeat, unsafe drivers can still drive, so long as they can afford to pay their tickets.

There is also a personal connection for me.  Despite not having a driver's license - nor the intent to ever obtain one, there are many jobs for which the only requirement I do not meet is possession of said license.  Even among transportation planning positions focused on active transportation and non-motorized mobility, not having that license trumps my six degrees and current pursuit of three Masters degrees; ironically enough, all focused on sustainable transportation.

Conservative policymakers urge those in need to get work. But for those without driver’s licenses—who are by and large people of color—that’s not such an easy task.

MILWAUKEE—Ask conservatives what the poor need to do to get out of poverty, and the answer usually involves something like, “Get a job.” That was the crux of the anti-poverty plan Paul Ryan revealed last week to shrugs, and has been the gist of many anti-poverty efforts over the past two decades.

But for many people, there is one very specific—and often overlooked—reason why that’s not so easy: They don't have a driver's license.

Not all jobs require a driver’s license, particularly those that pay very low wages. But having one is a very common requirement for the sorts of job that can actually lift people out of poverty—those in construction, manufacturing, security, and unions jobs including electricians and plumbers, says Mark Kessenich, who runs WRTP Big Step, a Milwaukee center that trains low-income workers to enter jobs in construction and manufacturing that pay a starting wage of $15 and up.

“Not having driver’s license and access to reliable transportation is a big issue for us with the industries—utilities, construction, manufacturing,” he told me.
Sometimes, licenses are required because employers know the jobs will be at sites across a region, and need employees to be able to get there reliably and on time. Other times, licenses are required because employees may need to move cars—a listing for an auto detailer requires a license, for example—or move trucks, at construction sites.

Other times, though, the reasons for requiring a driver’s license are a little harder to understand. A quick scan of jobs listed in Milwaukee’s Craiglist emphasizes the point. Valid driver’s licenses are a prerequisite for positions including a retail security officer (pay $10.55 an hour), a caregiver for the disabled ($10 an hour), an eye-care associate, an administrative assistant, and a deli clerk. Licenses, to employers, signal responsibility.

“These days, positions use a driver’s license as a proxy for whether you’re employable,” says Julie Kerksick, who is a senior policy advocate at Public Policy Institute of Community Advocates in Milwaukee. “It means that there’s fewer and fewer people in the pool of unemployed who can actually qualify.”

Driver’s license requirements affect many low-income people trying to get into the labor market. But they disproportionately affect people of color. That’s both because minorities are much less likely to have driver’s licenses in the first place and, advocates say, they are also more likely to have their licenses taken away.
The result is that many minority job-seekers are disqualified before they even send in an application. According to the Employment and Training Institute at the University of Wisconsin-Milwaukee, 75 percent of white 18-year-olds in Wisconsin had driver’s licenses as of January 1, 2016, while just 34 percent of African Americans 18-year-olds did and 33 percent of Hispanics of that age did. (ETI only tracked 18-year-olds because that is the group whose they were able to access.)

“What we’re doing is making driver’s licensing about whether you can pay a fine based on middle-class incomes, not because of how well you drive.”
Why do so many minorities lack licenses? Nationally, many public schools don’t offer driver’s education courses as part of the curriculum, and the fees for private lessons are prohibitively high for low-income families. Today, just 15 percent of eligible students take driver’s ed at school, compared to 95 percent in the 1970s, yet most states require students to take a course before they take their driving test. In 2004 Wisconsin cut its funding for high-school driver’s ed because of the state’s fiscal concerns. Many people living in poverty or near poverty don’t have a car to practice on and fail their tests. But the biggest problem, civil-rights activists say, is that the poor frequently get their licenses revoked for failing to pay tickets for minor infractions.

For instance, in Wisconsin, failing to pay a traffic ticket—even for something small like a burnt-out taillight—can mean a 12-month license suspension. That’s much longer than the half-month suspension a person would get for speeding 25 miles-per-hour-or-more over the limit, or the six months someone would receive if he or she got a ticket for reckless driving. In fact, 60 percent of license suspensions in Wisconsin are for “failure to pay forfeitures”—not paying a traffic ticket—rather than for unsafe driving itself.

For obvious reasons, this means that poor people get their licenses suspended much more often than those with means, as they don’t have the cash to pay a parking ticket, said Molly Gena, an attorney with Legal Action of Wisconsin. Sometimes, police issue a number of tickets at a traffic stop—for drivers that don’t have their insurance information on them and who also have a headlight out, for example—and drivers can’t pay the sum of the tickets.

“What we’re doing is making driver’s licensing about whether you can pay a fine based on middle-class incomes, not because of how well you drive,” says Nichole Yunk-Todd, who is the director of policy and research for Wisconsin Community Services, a group that advocates for the poor.

It’s not just finding a job that becomes more difficult without a driver’s license. Without a license (and access to a car), families often struggle to get get to good grocery stores,they can’t, in some states, even vote in elections.

Sometimes, license suspension isn’t about driving at all. In Milwaukee, adolescents can have their licenses suspended before they even get them if they fail to pay citations for things like violating curfew (Milwaukee has a legally enforced curfew for people under the age of 17) or disorderly conduct. Between 2008 and 2011, more than 3,055 people under the age of 18 were issued suspensions for failing to pay court fees and forfeitures, according to the Employment and Training Institute. Statewide, young black males had 10 times as many failures to pay forfeiture suspensions as whites.

The results are skewed heavily by race. “This is the situation as young people reach adulthood: The majority of whites in the state have a driver’s license, and the majority of African Americans do not,” said Lois Quinn, a researcher at the Employment and Training Institute. In Milwaukee, where the sheriff, David A. Clarke Jr., is an African American and vocal Trump supporter, a black driver is seven times as likely to be stopped by police as a white driver, according to an investigation by the Milwaukee Journal-Sentinel. “There are a million and one different traffic infractions that a police officer could lawfully pull you over for,” said Jason Williamson, a senior staff attorney with the American Civil Liberties Union’s Criminal Law Reform Project.

“Our broken-windows enforcement is stopping cars,” Quinn said, referring to the policing approach in which police aggressively pursue small, public infractions.
The Milwaukee Police Department focuses its efforts on the areas with the highest crime, and those areas are the ones with the highest concentration of African Americans, said Timothy Gauerke, a police spokesman. Research shows that traffic stops reduce crime, he said. And not everybody who is stopped is issued a citation—citations were issued in just 17 percent of traffic stops citywide last year, he said.
Racial profiling extends far beyond Milwaukee. “This is happening by and large in communities of color and happening to people who don’t necessarily have the income to pay those tickets,” Williamson said. In every jurisdiction the ACLU has investigated, a disproportionate number of people of color are being stopped, according to Williamson. 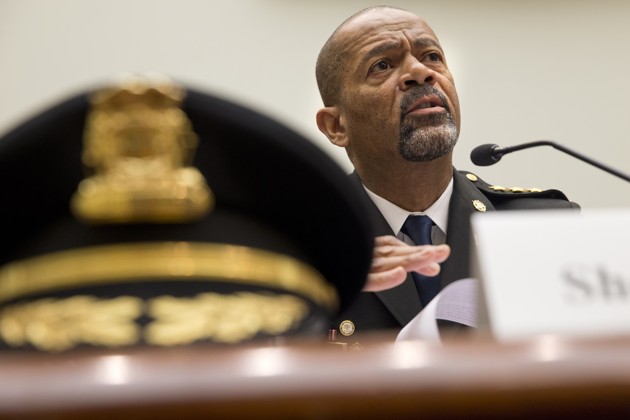 In many cases, “it becomes this cycle of poverty, you lose your license because you couldn’t pay the ticket, and you can’t get a job because you don’t have a license,” says Gena, the Legal Action attorney. She says suspensions of licenses related to poverty should be eliminated completely. If the state is going to suspend a driver’s license, she says, it should do so because a person is a danger on the roads.

Some states have made it harder to take away licenses for violations unrelated to driving. In Wisconsin in 2010, it became law that municipal courts allow low-income, indigent defendants the opportunity to get on a reasonable payment plan based on their income, according to Yunk-Todd. But oftentimes, the amount required in the payment plan is still a challenge. At least seven states have dropped mandatory driver’s license suspensions for minor drug-related offenses. Idaho is revisiting a law that charges people with a crime for driving with a suspended license, according to Williamson. And in Wisconsin recently, after years of advocacy, the state passed a law saying that failure to pay traffic tickets would lead to license suspensions for 12 months, rather than 24.

Yunk-Todd says that advocates wanted to lower the duration even further, but that wasn’t palatable for Wisconsin’s conservative legislature. It’s ironic, then, that Wisconsin was one of the first states to emphasize getting a job as a solution for poverty, but the state and others like it are, in some ways, standing in the way of the poor doing just that.

“We can spend all our time talking about and debating anti-poverty programs,” Yunk-Todd said, “But often it comes down to these policies that need to be fixed.”