CityLab: Detroit Is Turning Vacant Lots Into Sponges for Stormwater

When it comes to green infrastructure, the city’s got plenty of parcels to work with.

A rendering of one of the bio-retention gardens in the Warendale neighborhood. (Courtesy of Joan Nassauer)


In Brooklyn, a developer plans to back dirt-filled dumpsters into parking spaces this summer, the Brooklyn Paper reported, in the hope that the soil and plants will soak up storm water before it breaches the nearby Gowanus canal—a Superfund site with a famous and fetid tendency to flood. In a borough that’s increasingly squeezed for space, these small-scale interventions make sense: real estate is at a premium, and green interventions can be wedged into any available sliver.

Like Detroit, Philadelphia and New Orleans are doubling down on green stormwater infrastructure. But in Detroit, where the available space exceeds the current market demand, environmental interventions are playing out on particularly large scales. There’s room to turn entire lots into proving grounds.Detroit, on the other hand, has considerably more space to work with. “What comes to the rescue here is having plenty of land,” says Joan Nassauer, a professor of landscape architecture at the University of Michigan. It’s a sprawling city, with vacant or buckling properties scattered across its 139 square miles. As of April 2016, 66,125 vacant parcels were held by the Detroit Land Bank Authority, which has received more than $100 million in federal funds to demolish blighted structures. Already, 2,112 such buildings have been razed this year. “This is really good news in a way you wouldn’t necessarily expect for opportunities to be creative,” Nassauer says.

This spring and summer, researchers across the city are investigating the immediate and long-term ecological and sociological benefits of turning vacant land into stormwater basins topped with colorful plants. Can these parcels improve the health of the bodies of water around them—while also beautifying long-struggling properties?

Across the country, cities must manage the water that falls on impervious surfaces and align themselves with the mandates set forth in the Clean Water Act. The challenge is to keep runoff as clean as possible and slow its path to receiving waters.

Detroit feels that problem acutely. More than 3,000 miles of gravity-fed pipes wind beneath Detroit’s streets. Detroit, like many other older cities, has aging water infrastructure that uses combined sewer systems: Rainwater rushes to the same drains that ferry wastewater to treatment plants. Strong, unyielding storms, which have increased in the region over the last half-century, can overwhelm the pipes, causing a mix of runoff and untreated wastewater to back up into local rivers. This phenomenon contributes to algae blooms fueled by phosphorous and nitrogen. Last summer, a record-breaking toxic cluster in Lake Erie threatened drinking water for 400,000 Toledo residents. “The Rouge River and the Detroit River [were] a part of the cause of that problem,” Nassauer told the Detroit News last November.

Decades ago, the city offloaded tens of billions of gallons of untreated water into the local rivers annually. The volume continues to spike following storms. In August 2014, a storm battered the region with 5.5 inches of rainfall; the sewers then discharged 10 billion gallons of overflows into local waters, according to a Detroit Free Press analysis of data from the Michigan Department of Environmental Quality. Over the last two decades, the city has poured $1 billion into upgrading the system; now, its six retention basins and three treatment facilities can accommodate approximately 95 percent of the untreated overflow—an improvement, but an imperfect solution. “How do you get to the last 5 percent of the problem?” asks Palencia Mobley, the deputy director of Detroit Water and Sewerage. “Spending another $1 billion or $2 billion doesn’t make a lot of economical sense.” 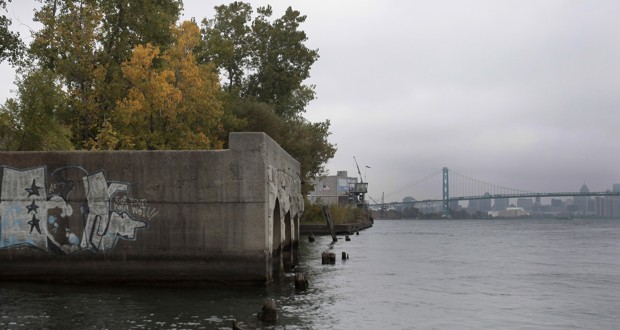 From lots to gardens

In Detroit, the problem of storm water management is exacerbated by the fact that the city is seated on a glacial lake plain. The soil is rich in clay, and isn’t easy for water to infiltrate. This intrinsic trait is compounded by the fact that some of the lots have sat fallow for nearly a quarter century. The soil is, by nature, somewhat hostile to water—even more so when it’s been compacted by years of disuse.

Wade Rose, the vacant land restoration manager at the reforestation and farming organization the Greening of Detroit, described the process of remediating parcels that have been untended for decades. The houses that used to sit on top of them, Rose says, were demolished before the current protocols were put in place; they might have been bulldozed into the basement and sealed off. Rose thinks that storm water is being captured in some of those pockets, propped up by cement blocks or cracked foundations. At some sites, Rose has encountered detritus that was never hauled away. “Sometimes, we’d hit a mattress with a power tiller,” he told me at a vacant land workshop earlier this month. “You’d hit it and poof! Snowing in August.”
Rose is putting vacant land to work as part of the EPA-backed Great Lakes Restoration Initiative. The Greening and its partners are working on 31 lots totaling about 3 acres. (The team installed 14 lots last fall, and broke ground on the other 17 a few weeks ago.) The project deploys various techniques for soil remediation and water retention: a wildflower meadow; a tree stand, in which oak trees’ roots fracture compacted soils; rain gardens with deep depressions; and a treatment that deposits 100,000 worms at depths ranging from 2-6 feet, creating a network of tunnels that make space for storm water.

Over the next two years, as the plants flourish and the root systems expand, researchers from Lawrence Technological University will conduct rain simulations; the Greening will monitor the interventions to determine which one is most successful and cost-effective. “We’re looking for the sweet spot in between those two,” says Rose.

In May, Nassauer gathered with colleagues and collaborators at from the Detroit Water and Sewerage Department, and the DLBA to introduce their project: four gardens in the Warrendale neighborhood on the city’s west side, which neighbors the Rouge watershed.

Under a license agreement with the DLBA, the team created gardens across two contiguous lots. The basements are filled with a porous, gravel-based material that retains storm water, but also grabs it, siphoning water from 15 or 16 lots on a given block. The gardens are projected to absorb 300,000 gallons of water each year. (The license agreement runs through December 2025.)

Deliberateness was key to this project—this was not a gentle slide into entropy. “These are emphatically not urban meadows, definitely not native plant gardens,” Nassauer says. “These are gardens that are going to look well-tended and orderly all year round.” Though she feels that there’s a place in the urban ecosystem for various types of green infrastructure, the point here, she says, is to telegraph stakeholders’ long-term investment in the project and in the community members who live nearby. “People should be able to walk by and say, ‘the city is taking good care of this place,’” she says.

Before breaking ground on the project, researchers surveyed all residents living within 800 feet of the sites. They brought renderings and solicited feedback about the projects’ aesthetics. What did neighbors want to see? Residents reported rosier perceptions of the neighborhood when they looked at renderings with flowering trees, long-lasting blooms, and short shrubs that didn’t impede lines of sight—so that’s what the team planted. (Rose’s team gathered community responses, too, beginning in 2014; those comments steered the team towards a color palette consisting mostly of pinks, purples, and blues.)

The Warrendale gardens were outfitted with devices to monitor the water flow; as a result, the installations cost about $125,000 apiece. A number of city agencies will collaborate to maintain the gardens. Going forward, Nassauer says, the goal is to bring this to scale and drive down the cost. Mobley echoes that hope, but adds that her team has encountered some trouble settling on new sites. “We’re trying to be cognizant of the planning and development efforts at work,” Mobley says. “From a Land Bank perspective, you want to put property in the hands of property owners who want to manage it.” Since demolished lots are sometimes sold to the adjacent property owners, Mobley’s team has struggled to find the right parcels on which to expand the project. In the meantime, she says, DWS is collaborating on green infrastructure projects with Detroit Public Schools that abut the Rouge River, and with the Parks Department and community groups to revitalize public spaces, including a park dedicated to the Civil Rights activist Viola Liuzzo.

Rose sees the potential for the GLRI gardens to scale up, too. Conducting the preliminary tests on these first lots will help the team evaluate whether these are effective treatments. But because of the amount of vacant land, he adds, they can test them on larger swaths, too—eventually, maybe even scaling them up to several blocks. “Detroit is one-of-a-kind, as far as habitat goes in the U.S.,” he told me at the workshop.

A few weeks ago, Nassauer stopped by to check up on the gardens; she was showing a friend around. She stooped to pull some weeds from the garden bed, and a man crossed the street to come meet her. She asked him what he thought of the garden, and, she says, he told her: “It’s been a real blessing.” It was a validating sentiment. “That’s what we want people who live next to these sites to feel,” she says. “Not that something strange has been visited upon them…but that we’re creating immediate benefits.”