VTA: Next Network: Frequency and Ridership 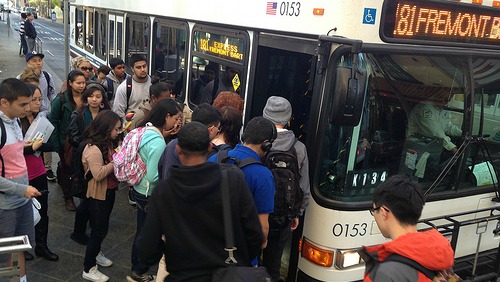 This is part of a series of Headways Blog posts about VTA’s Next Network Project, which will redesign VTA’s bus transit network.

Why does increasing frequency make sense as a strategy for increasing ridership instead of other options, like expanding service to new areas?

Adding service to new areas and adding more buses to existing routes would both increase ridership, but adding service is expensive.  Without funding available to pay for new service, we must focus on how to generate the most ridership with our existing resources.  That means we must look at strategies that maximize the number of boardings per hour of service.  This measure of boardings per hour of service is known as productivity.  Increase productivity and you’ve increased ridership and the cost-effectiveness of transit.

First, why is frequency so important for attracting riders?  According to transit design expert Jarrett Walker, “Frequency has three independent benefits for the customer, which helps to explain why high frequency is so critical to sustained high ridership:
“If you think about how these three things govern the real usefulness of transit, you can begin to see why frequency is such a ferocious ridership-driver,” says Walker. “[Frequency’s] benefits tend to be exponential, up to a point, because improving frequency is actually three different improvements at once.”We have found in VTA’s system as well as in transit systems across the country that doubling the frequency of transit service in corridors that follow the ridership recipe results in a more than doubling of boardings.  This tells us that increasing frequencies in promising corridors is a winning strategy for increasing ridership.Our next Headways Blog post will discuss why frequent service is so important to making transfers work well.  To read all the previous blog posts on Next Network, click here.