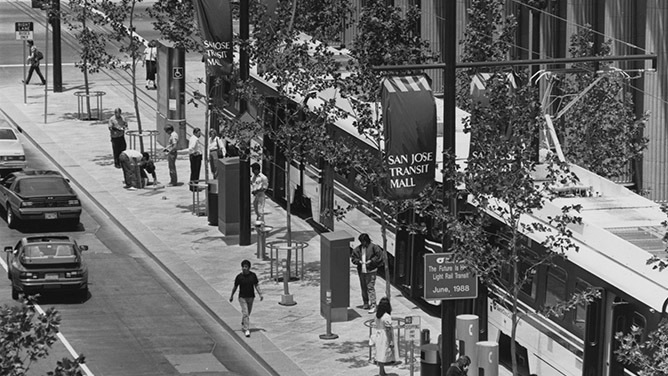 We start with VTA’s light rail system. In order to serve the mass transit needs of a growing Silicon Valley, Santa Clara County received a $2 million dollar federal grant in 1982 to fund the preliminary engineering phase for the County’s first light rail line.  Construction began with a maintenance facility in downtown San Jose to store, clean and repair what would be 99 light rail vehicles in VTA’s fleet. During this era when Silicon Valley was busy connecting the world electronically, VTA was building a mass transit system crisscrossing the growing urbanized area, connecting people to jobs, education centers and growing communities.

By 1987, the County received over $253 million from the federal government to fund the County’s first light rail line. The initial track, which spanned 1.5 miles, was essential for testing the light rail vehicles as they were delivered.  A 21- mile light rail line opened on April 21, 1991 to provide Santa Clara County with its first completed light rail line, connecting the suburban neighborhoods of south San Jose through downtown, and north to the industrial areas of Silicon Valley.

As part of our most recent efforts to make light rail more efficient, VTA installed a second track near the Mountain View Transit Center in 2015 which has enhanced VTA’s connections to Caltrain service on the peninsula. More is on the horizon for light rail addressing speed and reliability improvements to meet the demand that will result from the BART extension into Silicon Valley in late 2017.

As we move through the 21st century, it will become more critical to provide the funding necessary to maintain a safe and efficient transportation infrastructure to serve the capital of innovation, Silicon Valley. Santa Clara County residents have always stepped up with their support, making our community one of the first “self-help” counties in the nation approving local taxes to support transportation infrastructure.

VTA has identified a plan to advance much-needed infrastructure improvements that will be the focus of a VTA Board vote on June 2, 2016, where they will consider putting a half-cent sales tax measure on the November 2016 ballot. For a list of recommended improvements, visit VTA’s Envision Silicon Valley page.

To learn more about Santa Clara County’s rich history of improving mobility, check out our series looking back on 40 Years of Investment.