Project Awarded $14 Million for Testing Emerging Zero and Near-Zero Emission Technologies to Bring Cleaner Air to Port-Adjacent Communities Sooner
SAN PEDRO, Calif. – May 26, 2016 –Building on a shared commitment to eliminate pollution from port-related operations, Pasha Stevedoring and Terminals L.P. and the Port of Los Angeles are launching the Green Omni Terminal Demonstration Project, a full-scale, real-time demonstration of zero and near-zero emission technologies at a working marine terminal.
“This is a Wright Brothers moment,” said Jeffrey Burgin, Senior Vice President of Pasha. “We’re going to be the proving ground to change the paradigm of how large industrial facilities can run on clean energy. We’re confident we can show this is absolutely attainable.”
“The Port of Los Angeles is leading the world toward a sustainable future, and today we’re raising the bar again,” said Los Angeles Mayor Eric Garcetti. “With this partnership, we begin a new era for global shipping where we can eliminate emissions as we power our economy ahead. I look forward to seeing this innovative technology in action.”
At full build out, Pasha will be the world’s first marine terminal able to generate all of its energy needs from renewable sources. The project is funded in part by a $14.5 million grant from the California Air Resources Board (CARB) for reducing greenhouse gases and other pollutants. As part of the project, Pasha will integrate a fleet of new and retrofitted zero-emission electric vehicles and cargo-handling equipment into its terminal operations and demonstrate the latest generation of advanced technology for capturing ship emissions from vessels unable to plug into shore power at berth.

“It is exciting to see a project with so many emerging zero or near-zero emission solutions for handling and moving freight,” said CARB Chair Mary D. Nichols. “These innovative clean technologies will help clean the air in port-adjacent and disadvantaged communities, and are at the heart of California’s comprehensive effort to meet regional air quality and statewide climate goals.”
Improving the health, quality of life, and local economy of California’s most burdened communities is a critical element of the project. Pasha’s terminal is adjacent to Wilmington, a community recognized by the state as disproportionately impacted by industrial pollution.
“The Green Omni Terminal Demonstration Project is a great example of moving forward to achieve greater emission reductions from port-related sources and improving air quality for those who live in the neighborhoods next to the port,” said Port of Los Angeles Executive Director Gene Seroka.
With the goal of making the Pasha terminal a more sustainable and resilient facility that can operate independently off the grid in the event of a power loss, the project also features a microgrid that includes solar generation, battery storage and an energy management system to maximize usage. The 40-acre terminal handles general, project and heavy-lift cargoes of all shapes and sizes, including break bulk commodities such as steel and containerized cargo, making it the ideal laboratory for developing zero-emission solutions for many industries.

Project implementation will start in June with the final design and construction of the solar-powered microgrid. Components include a 1.03 megawatt photovoltaic rooftop array, a 2.6 megawatt-hour battery storage system, “bi-directional” charging equipment that can receive as well as supply power, and an energy management control system.
The project’s developmental fleet of zero-emission cargo handling equipment includes four electrified yard tractors, two high-tonnage forklifts, two drayage trucks and a top handler. Additionally, two wharf cranes will be upgraded with new electrical drives and control systems, and the project will demonstrate ShoreCat, the next generation of the METS-1 (Marine Exhaust Treatment System) for capturing at-berth vessel emissions without plugging into shore power. METS-1, which was piloted at the Port of Los Angeles, is one of only two existing ARB-approved alternatives to shore power.
The comprehensive strategy is expected to reduce more than 3,200 tons per year of greenhouse gases and nearly 28 tons annually of diesel particulate matter, nitrogen oxides and other harmful emissions from operations at the nation’s busiest container port. The clean air gains equate to taking 14,100 cars a day off the road in the South Coast Air Basin.
In addition to integrating zero-emission vehicles and cargo handling equipment into the full scope of terminal operations, the project’s goals are to reduce emissions at berth from non-regulated ships, accelerate the development of commercially viable zero and near-zero emission equipment and solutions.
The competitive grant, the first of its kind for a multi-source facility demonstration project available through the ARB, required matching funds of at least 25 percent. Pasha, the Port and other partners exceeded that threshold with a 44 percent funding match.
The total cost of the project is $26.6 million. In addition to serving as the demonstration site, Pasha has committed $11.4 million in cash and in-kind participation.
Of the eight projects vying for nearly $24 million in state grants to reduce greenhouse gases and pollutants from facilities with multiple emissions sources, the Green Omni Terminal Demonstration Project captured more than 60 percent of the total available funding. The project is part of the California Climate Investments, which use proceeds from the state’s cap-and-trade auctions to reduce greenhouse gas emissions while providing a variety of additional benefits to California communities.
A hallmark of the project is collaboration with green-tech original equipment manufacturers and technical experts from the private sector, academia and regulatory agencies. With Pasha and the Port of Los Angeles at the helm, the project’s partners are the engineering firm of Burns & McDonnell; original equipment green-tech manufacturers BYD, Clean Air Engineering Maritime, PermaCity and TransPower; the Coalition for Clean Air acting as the project’s community advisor; and technical experts from the Los Angeles Department of Water and Power, the South Coast Air Quality Management District, the UCLA Luskin Center for Innovation, and the University of California, Riverside’s College of Engineering Center for Environmental Research and Technology.
Labor is also a crucial partner. From the get-go, the project incorporates training of the International Longshore and Warehouse Union workers who will operate and repair the equipment.
Project plans call for phasing in the new infrastructure and technology by the end of 2016, with zero and near-zero emission equipment subject to the same rigorous duty cycles of conventional cargo handling equipment. Data collection and analysis to track energy efficiency improvements and cost savings will take place over the subsequent two years.
The genesis for the project was the Port and Pasha’s commitment to ensuring Southern California could supply energy and basic goods to the community and serve as a base of operations for the military in the event of a natural or mandate disaster, while simultaneously meeting these critical infrastructure needs with renewably powered zero emission technologies. The commercial component followed.
“This is something we’ve put a lot of time and energy into for all the right reasons,” said Burgin, adding the project is the first phase of more innovation ahead for Pasha. “This is scratching the surface of where this industry is going to go, and we’re already planning the next phases to get us there.”
The Port of Los Angeles is America’s premier port and has a strong commitment to developing innovatively strategic and sustainable operations that benefit Southern California’s economy and quality of life. North America’s leading seaport by container volume and cargo value, the Port of Los Angeles facilitated $270 billion in trade during 2015. Port operations and commerce facilitate more than 133,000 jobs (about one in 14) in the City of Los Angeles and 479,000 jobs (or one in 18) in the five-county Southern California region. The San Pedro Bay Ports support nearly 1 million California jobs and 2.8 million nationwide. 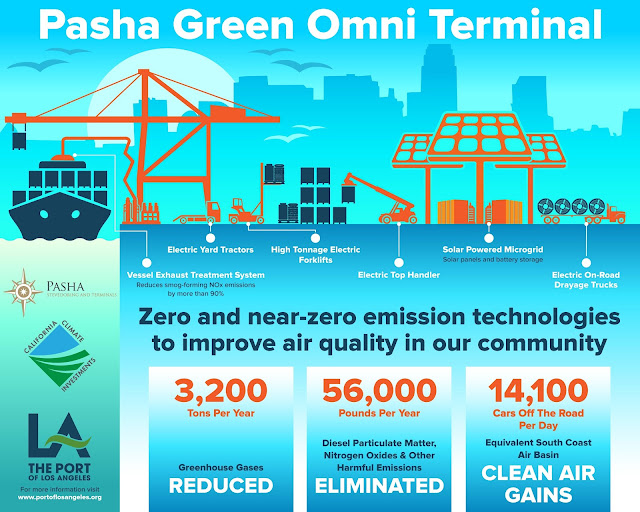