The results of Proposition 1B--a transportation funding package approved by the voters in 2006-- demonstrate that promises made to California voters for significant traffic and other transportation improvements were kept through good management, carefully established accountability measures and transparent reporting of bond funds spent.

In placing Proposition 1B on the ballot, the Legislature outlined broad performance expectations and accountability measures to ensure bond dollars were used effectively. In addition, a gubernatorial executive order following passage of Proposition 1B also called for accountability and transparency so the public could readily access information on how the state and its partners expended the bond proceeds. The California Transportation Commission’s oversight and reporting processes, and the outstanding project delivery record of Caltrans, local agencies and other partners, ensured that California taxpayers received a good return on a $12 billion investment in the state’s transportation network resulting in major system improvements and jobs. 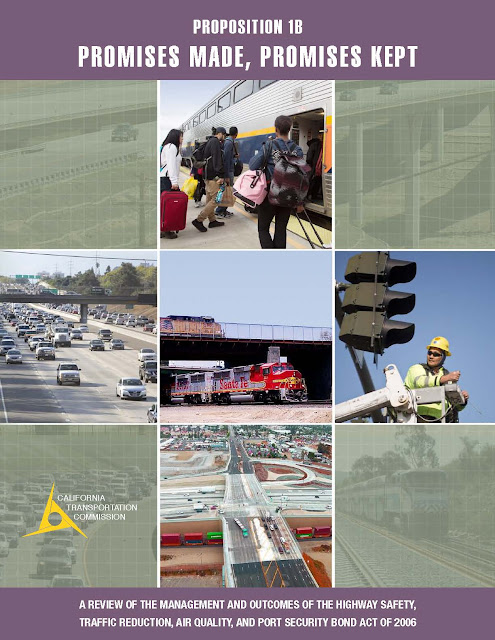 Among the Key Results and Conclusions:
• The Commission’s management of Proposition 1B funds delivered on the promises made to voters for on-time, on-budget transportation improvements throughout the state within 10 years.
• State, regional and local transportation agencies were held accountable and were transparent with taxpayer dollars while successfully constructing transportation improvements.
• 98 cents of every dollar went to projects; only 2 cents to project administration.
• More than $12 billion from Proposition 1B leveraged (i.e., enhanced) an additional $25 billion in federal, local and private money.
• Recipients of Proposition 1B bond dollars were held to project scope, cost and schedule commitments. Baseline agreements between implementing agencies and the Commission were required as a condition of receiving funds for projects.
• The Commission and recipient agencies worked collaboratively to ensure adherence to project commitments, including effective corrective actions in the event of project issues.
• The expenditure of Proposition 1B bond funds came at a critical time, creating more than 650,000 jobs statewide at a time when jobs were most needed during the 2008-12 Great Recession—the nation’s worst economic downturn in 80 years.
• During this time, the state benefited from a strong competitive bidding environment resulting in $2 billion in project cost savings. These savings were rapidly reinvested in additional capital work, increasing the return on investment to taxpayers, by getting more “bang for the buck” and more projects than originally planned.
• To maintain transparency, a user-friendly website and other reporting tools were utilized so that taxpayers and stakeholders were kept informed of the program’s progress. The public was able to access specific information and status at any point during each project’s design and construction timeline.

While the public benefits of Proposition 1B and the improvements to the state’s transportation system were considerable, this program represented a one-time infusion of funding. California needs continuing, sustainable funding for transportation improvements in order to maintain a robust economy and a decent quality of life. In order to continue applying the successful management components of the Proposition 1B program, additional funding for future transportation improvements should require similar accountability and transparency provisions that propelled this program to a successful outcome.

As the California Legislature considers new funding options for transportation, state and local agencies must be prepared to commit once again to effectively manage and spend taxpayer dollars on transportation improvements. The management of Proposition 1B funds provides a strong track record of past success that demonstrates a clear path for future investment.