CNN: America's commuter rail system is going off the rails

By Rene Marsh, David Gracey and Ted Severson, CNN
Washington (CNN)Nearly 40 million Americans will kick off one of the busiest travel seasons in history this Memorial Day weekend, jarred by potholes on America's roads, crossing her aging bridges, riding her antiquated railways and taking off from airports that draw international scorn.
Long a source of national pride, America's infrastructure is in critical need of repair, but federal government spending on the issue has gone down 9% in the past decade. As former Secretary of Transportation Ray LaHood says, "We're like a third-world country when it comes to infrastructure."
CNN aviation and regulation correspondent Rene Marsh investigates the state of the country's bridges, railways, airports and pipelines in a four-part series: America's Crumbling Infrastructure. Check back here from now through Monday.

Part 2: The busiest rails shut down by failing power cables 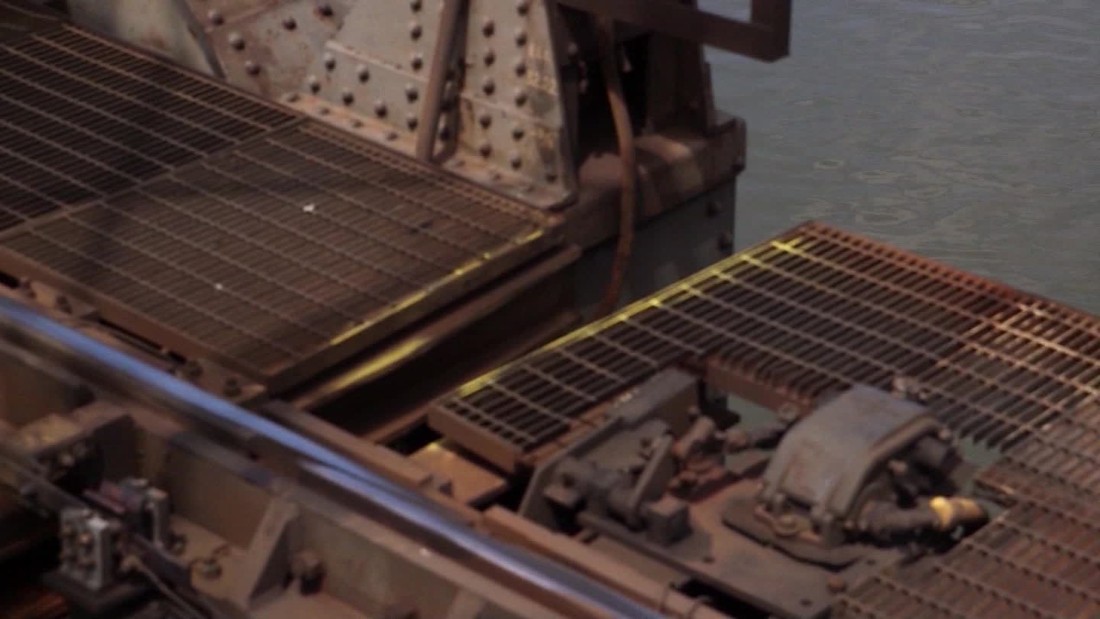 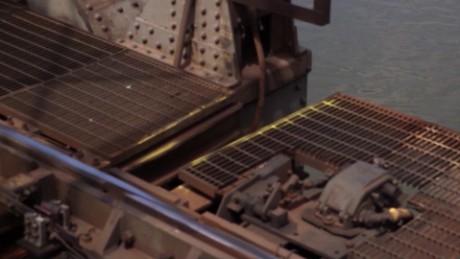 Cracks in the busiest bridge in the western hemisphere 00:51
The Portal Bridge in New Jersey is the most heavily trafficked rail span in the Western Hemisphere. Connecting New Jersey to New York City's Penn Station, an estimated 450 trains cross it every 24 hours.
Below -- sometimes not much more than 25 feet down -- is the Hackensack River, itself a busy thoroughfare for boats and barges. To accommodate both, the Portal Bridge operates on a swing-span, allowing it to open for watercraft, then close up again to complete the rail path.
"The problem we have is that, as it swings back, those miters don't always come down right, because this thing is so old," explains Amtrak CEO Joe Boardman.
And when those "miters" don't line up correctly, train traffic grinds to a halt.
"So then you have to get crews out here," Boardman says. "That holds up a lot of trains, no matter what time of the day it is."
The Portal Bridge, like so much of America's archaic and often wonky infrastructure, was designed in the 19th century and built more than a hundred years ago.
But funding for an overhaul, or the construction of a new passage, remains elusive. An Amtrak estimate from 2013 puts the cost at just under a billion dollars.
Less than nine miles east, the tunnel that connects Jersey City to Manhattan is cracked and crumbling.
The 106-year-old Hudson River Tunnel connects more than 230,000 commuters daily, but in the aftermath of Superstorm Sandy in 2012 it has been plagued by power failures, causing shutdowns and days-long delays.
"This salt is eating away at the concrete, it's eating away at the rails, it's eating away at the cables that go through here for power," says Boardman, who describes it as one of the most disturbing examples of an infrastructure system long ignored or deprived of needed maintenance.
The price of renewing and safeguarding the web of railways that runs up Amtrak's "Northeast Corridor" -- more than 450 miles -- stands at an estimated $20 billion.
The cost for passengers has been steeper.
In May 2015, an Amtrak passenger train traveling more than twice the 50 mile per hour speed limit jumped the tracks in Philadelphia. Eight people were killed and more than 200 riders were injured.
The deadly derailment might have been prevented if the tracks had been fitted with a technology called "Positive Train Control," an innovation that automatically slows speeding rail traffic.
So what's taking so long?
"It takes time to make sure it works right," Boardman says. Across the country, 30 freight and passenger train accidents, 69 deaths, and more than 1,200 injuries could have been prevented had the technology been in place.
With Congress tied up in partisan knots over new spending, the bullet trains of Japan -- which cruise at over 200 miles per hour and could cut in half the travel time between Boston and Washington, D.C. -- seem a long way off. Implementing a similar system would come with a price tag exceeding $151 billion.
"You want to be able to show the benefit of the dollar you invested," Transportation Department head Anthony Foxx tells CNN. "I think members of Congress struggle, because (these projects) actually require longer than a political term to take root."
Short term thinking leads to long term trouble, and for the busiest strip of track in the Americas, the crumbling is becoming more difficult -- and dangerous -- to ignore. 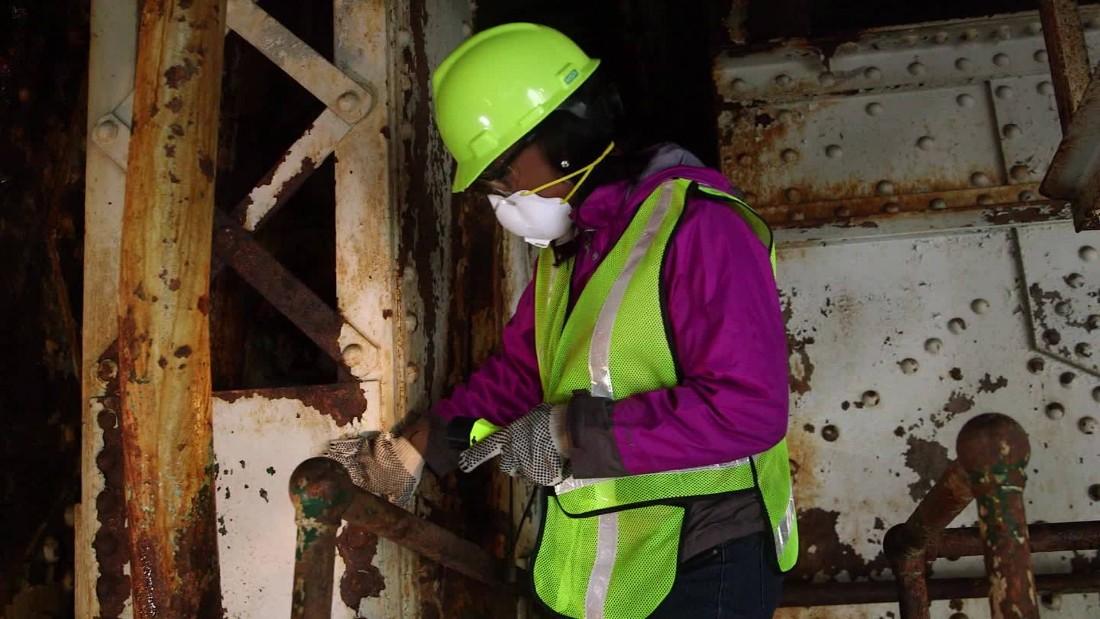 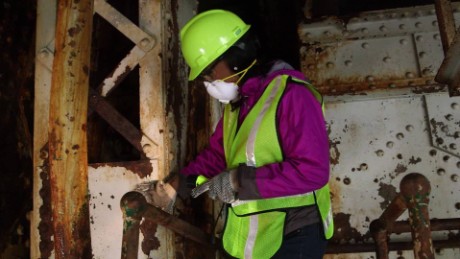 This bridge in Washington, D.C. is disintegrating 02:52
Nearly 60,000 bridges across the country are in desperate need of repair. One example is just down the street from the White House and Capitol Hill. In the nation's capital, 68,000 vehicles cross the Arlington Memorial Bridge between Washington and Virginia every day. CNN was granted rare access to go inside the crumbling bridge.
"It's just eroding and concrete is falling off," said National Park Service spokeswoman Jenny Anzelmo-Sarles as she showed how the original support beams from 1932 are corroding. The beams have never been replaced, and the bridge could be closed to vehicle traffic within five years if it isn't fixed. It'll cost $250 million. 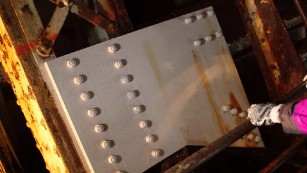 Go inside the corroding Arlingon Memorial Bridge 01:14
In 1932, as the Arlington Memorial Bridge was being erected, Congress was dealing with the Great Depression. That same year, President Herbert Hoover enacted the first federal gas tax at 1 cent per gallon. The gas tax is a major source of funding for bridges and roads that has been raised periodically until 1993, when it was set at 18.4 cents per gallon.
Although the gas tax has remained steady, cars have become more efficient and overall federal government spending on infrastructure has declined 9% from 2003-14, according to the Congressional Budget Office. According to the American Road and Transportation Builders Association, every state has some degree of bad bridges that need to be repaired. In Los Angeles, CNN found trees growing out of cracks in a bridge. In Chicago, netting is in place to protect drivers from falling concrete.
LaHood was a rare Republican who served in President Barack Obama's administration. He says there's an easy way to fund upgrades to an infrastructure system that has become "third-world": Raise the gas tax. LaHood and others blame Congress for failing to raise the gas tax in 23 years.
Republican Rep. Bill Shuster, who chairs the House Transportation and Infrastructure Committee, said raising the gas tax "doesn't solve the long-term funding problem." But Congress has not yet come up with a solution.
Beyond funding, there is another issue: how to make the bridges better. Researchers at the University of Michigan believe they may have a fix: bendable concrete that can heal itself from cracks. Demonstration in the university's engineer lab shows regular concrete can fail quickly and suddenly. Professor Victor Li, who developed the technology over the past 10 years, said the bendable concrete can withstand a force hundreds of times more powerful than standard concrete. The researchers' hope is that it could help already crumbling bridges, like the Memorial Bridge near the nation's capital.
But new concrete is expensive. According to the American Society of Civil Engineers, bridge infrastructure investment needs to be increased by $8 billion annually. The society said that increase would address the estimated $76 billion in needs for deficient bridges across the United States.
CNN's Gregory Krieg contributed to this report


(Source: http://www.cnn.com/2016/05/25/politics/infrastructure-roads-bridges-airports-railroads/)
Posted by Anonymous at 01:44